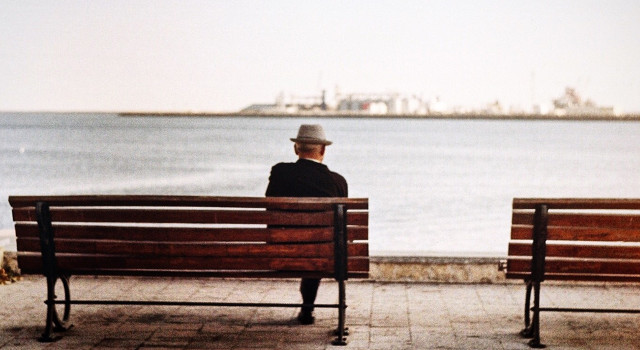 Enacted on August 14, 1935 as part of the New Deal under President Franklin Roosevelt, it was intended to solve a 34 percent nonagricultural unemployment that left older people destitute and unlikely to be hired. The program passed with 2% of the Democrats voting against it because it wasn’t generous enough and 33% of Republicans opposing it. The Social Security website describes the initial program:

The Social Security Act, enacted on August 14, 1935, provided a new federally administered system of social insurance for the aged financed through payroll taxes paid by employees and their employers. Under the system, which applied only to workers in commerce and industry, people would earn retirement benefit eligibility as they worked. With some exceptions, benefits would be related to workers’ average covered earnings, and workers could not have earnings and still be eligible for benefits. No benefits were provided for spouses or children, and lump-sum refunds were provided to the estates of workers who died before age 65 or before receiving at least the equivalent in benefits of their taxes plus interest. Collection of payroll taxes began in 1937, and benefit payments were scheduled to begin in 1942.

Initially, Social Security collected just 1% of wages. Currently, the government collects 12.4% of worker’s wages up to a fairly high maximum.

Initially, Social Security was a fixed amount. It took an act of Congress to raise benefits. Politicians regularly used this power to gain the support of senior voters. It wasn’t until 1975 that Social Security benefits were indexed to the Consumer Price Index for Urban Wage Earners and Clerical Workers (CPI-W). This provided a much needed annual increase for recipients.

Then, in 1996, the government changed the way that it calculates the CPI which resulted in a slightly lower inflation measurement, perhaps by as much as 1% annually. If that rate is accurate, the past 23 years have resulted in Social Security benefits failing to keep up with inflation and beneficiaries receiving only 79% of what they formerly did.

Current proposals include changing this index to the Consumer Price Index for the Elderly (CPI-E) which has grown at a slightly faster rate or switching to the Chained CPI which uses “creative substitution” to grow benefits at an even slower pace. Neither of these proposals would rectify any past under-reporting of inflation.

Social Security benefits were initially not taxed. It wasn’t until 1984 that benefits started being taxed. At that time, households over a certain threshold began having 50% of their benefits subject to tax. A second tier of additional taxation was added in 1993 providing that at higher incomes as much as 85% of benefits would be subject to tax. When first implemented these levels of taxation only affected about 10% of households, but the income levels subject to tax were fixed and did not adjust for inflation. Today about 56% of households have their Social Security benefits taxed.

Recognizing that the Social Security Program as it existed faced insolvency, efforts to privatize the program began in the 1970s. Those efforts faced the best chance under President George W. Bush in 2005 . Privatization could fix Social Security, but the mindset of a majority of the electorate currently does not support such changes, despite their better outcomes .

There is much arguing over the nature of the Social Security Trust Fund: Is it a Ponzi Scheme ? Do I have a right to Social Security? Where is the money? What is it invested in? What would it mean for it to be insolvent?

The issue reached national importance during the 2000 Presidential Debates when Vice President Al Gore promised, “I will keep Social Security in a lockbox. ” in response to George W. Bush’s suggestions to include a role for personal investment accounts.

Even the Social Security Administration misleads the public on their website when they answer a supposedly Internet myth :

While technically not lying, this explanation is massively misleading.

Currently, the Social Security system is running a surplus, taking in more in taxes than it spends on benefits. That surplus is used to purchase government bonds — the only purpose to which it can be put. The purchase of those bonds generates general revenue for the federal government and that money is spent on the operations of the federal government. That is a bad system, but it is how the trust fund was designed to work. The fund does not hold cash, never has held cash, and was not designed to hold cash. …

But, as President Clinton’s own fiscal year 2000 budget admits, those bonds are not real economic assets. Rather, “they are claims on the Treasury that … will have to be financed by raising taxes, borrowing from the public, or reducing benefits or other expenditures.”

In financing terms, the Social Security trust fund is an irrelevancy.

Politically the support for continuing Social Security is largely based on the false sentiment of sunk costs. “I’ve paid into the system for decades and now I want some of my money back!” Thinking of Social Security as an earned right is encouraged by politicians. They refer to Social Security taxes paid as “contributions.” But that thinking has specifically been ruled incorrect by the courts. As Michael D. Tanner explains , “In other words, Social Security is not an insurance program at all. It is simply a payroll tax on one side and a welfare program on the other.”

The Social Security taxes withheld from your paycheck were collected and spent on your parent’s and grandparent’s generation benefits. Unlike an individual retirement account (IRA), there is no lock box where your contributions are being safely stored in your name.

When correctly understood as forcing younger generations to supplement an older generation’s lifestyle, Social Security support is much less prevalent. Such wealth transfers were less burdensome in 1950 when there were 16.2 workers per beneficiary. Today, there are less than 2.8 making the burden nearly six times as onerous.

Fiscal conservatives also recognize the politics. The system currently keeps 22 million seniors just barely above poverty. It doesn’t seem to matter that any nongovernmental alternatives would have produced a much better outcome. Reform, by political necessity, has to begin with a grassroots understanding of the lost opportunity costs of the current entitlement system, and a bipartisan support to solve the underlying issues .

Politicians and public policy commentators are wrong when they refer to Social Security as a “retirement program.” Retirement plans are subject to strict government guidelines, many of which Social Security violates.

Also unlike retirement accounts, what you pay into Social Security cannot be inherited by your heirs in order to enrich their lives. Minority men have a lower than average life expectancy and are therefore more likely to pay large sums into the program only to die before receiving any benefits and leave their families impoverished as a result.

For a while, there was a strong disincentive for anyone who had reached full retirement age to continue working. This disincentive was finally eliminated in 2000. But in 2015 Congress also eliminated many of the other benefits and rules that had been implemented by the 2000 legislation.

Social Security is not a retirement plan worth the fuss of bankrupting the country. If you want to be part of the solution, save and invest your own 15% and take responsibility of your own financial independence.

Assuming you have savings, you can let your Social Security benefits grow while living off of your savings. Social Security Planning is currently one of our bonus services, meaning it is included in our Comprehensive service level and available for a planning fee in our Do-It-Yourself service level.

As part of that service, we compute how much of your savings you can pull forward and start spending before age 70 knowing that increased Social Security benefits are coming.

Photo by diana spatariu on Unsplash