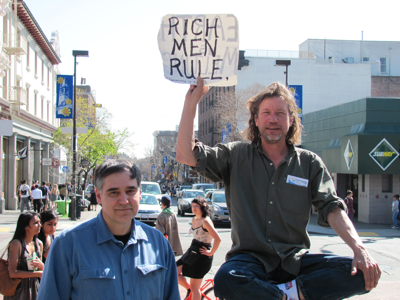 If you thought the legislation was bad, many Americans are about to get sticker shock.

No, I don’t mean the thousands of dollars more many Americans are paying for their healthcare. That cost is trivial compared with the real costs.

I’m talking about the hundreds of thousands of dollars more productive Americans are going to pay for their 2013 federal taxes.

The rubber has hit the road, and advisors are witness to the squealing. Despite frequent conversations with wealthy clients in recent times about the specter of rising taxes, “I’ve seen a lot of shocked looks on faces this year when we project people’s income and tell them how much tax they’ll owe for 2013,” says CPA David O. Erard, a partner at HCVT LLP in Orange County, Calif. “The reality of higher taxes is here.” …

…have modified adjusted gross incomes larger than the threshold for paying the loathsome 3.8% Medicare surtax on net investment income, which is $250,000 for joint filers and $200,000 for singles…

A tax of 0.9% on earned income, including self-employment earnings, kicks in at the same threshold as the surtax on investment profits. When adjusted gross income tops $300,000 for joint filers or $250,000 for singles, phase-outs curtail personal exemptions and certain itemized deductions.

Clients slapped with these increases could get nasty surprises next spring, such as an unexpected tax bill on April 15, or worse, an Internal Revenue Service penalty for underpayment. With three-quarters of the year now in the history books, it’s a great time to update clients’ 2013 income projections, estimate the federal tax liability and compare it with their withholding and estimated taxes.

“Even people with no change in income from last year could potentially owe the IRS because of the law changes,”…

Remember, there are at least three types of “rich” people: Wealthy (with a high net worth), extravagant (living a high lifestyle), and productive (having a high income).

Obamacare punishes the productive, which, economically,  is the worst group of rich people to punish.

Earlier this year I wrote about how much so-called tax planning advice this year is really just, “Realize you have to pay more. There isn’t much you can do about it.”

Remember, corporate taxes are not paid by corporations any more than car taxes are paid by cars. They are paid by shareholders, employees and consumers.

And trickle down taxation means that every employee employed by a small business owner just has a large amount of their potential income hit with higher taxes.

And the top tax rate on corporate profits distributed to shareholders has risen to 74%.

Democrats used the ruse of providing healthcare to justify massively higher taxes. And yet they still managed to make healthcare more expensive for everyone.

At least there will be fewer rich people to hate.