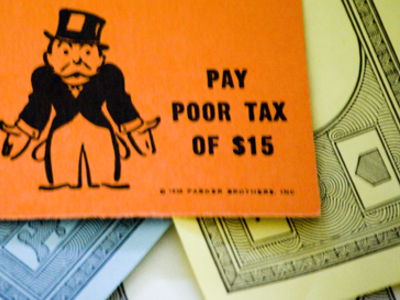 Walter Williams had a column in Investors Business Daily, “Who Pays for Corporate Taxes?” in which he wrote:

Virginia has a car tax. Does the car pay the tax? In most political jurisdictions, there’s a property tax. Does property pay the tax? You say: “Williams, that’s lunacy. Neither a car nor property pays taxes. Only flesh-and-blood people pay taxes!”

Corporations are burdened with tax collection, but they do not pay any tax themselves. Ultimately, corporate taxes are paid by three different groups of people:

(1) Shareholders. Anyone who owns shares, including shares in your 401(k), IRA, pension fund, Roth or taxable account, have a lower growth and a smaller dividend payout because of corporate taxes. This affects mostly the elderly as they represent the highest percentage reporting dividend income.

I am often amazed that often the same group who complains bitterly about terrible stock returns in the United States over the past decade then rants in favor of higher taxes on corporations.

(2) Employees. Ultimately when corporations are pressed financially, a portion of that burden falls on employees through lower wages, training, equipment, working conditions and benefits. Corporations won’t bother to grow their bottom line (expanding or trying to become more productive) unless the investment exceeds the hurdle rate imposed by their corporate tax structure.

(3) Consumers. Probably the most direct and immediate change of higher corporate taxes is higher consumer prices. Tax incidence is part of basic economics, but few seem to ask the question: Who Pays For Corporate Taxes?

We can argue about which of these three is burdened with the highest share of corporate taxes, but these are the three groups who must shoulder the burden. I suspect that shareholders can invest in countries with more economic freedom and a smaller tax burden. Employees cannot as easily work outside of the country they live in. But consumers can choose to buy some things from China. I suspect the order of burden is consumers, employees and then shareholders.