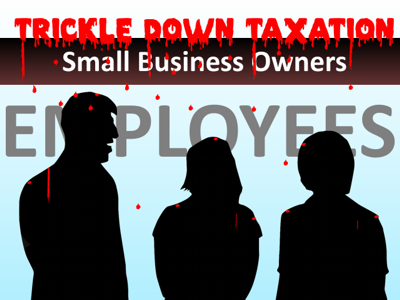 One of the strange and unintended consequences of targeting the rich with more taxes will be a greater gap between the rich and the poor. Politicians may have promised to only tax the rich, but all small business owners pay taxes on behalf of the firm. And their employees will end up shouldering their fair share no matter what. As a result, the middle class will get hit with tax increases aimed at the rich.

Imagine the tax code is a flat 25% tax. Now picture a situation where a business owner pays her 20 employees a gross salary of $50,000. Having put massive amounts of capital into the business, the owner receives a gross salary and a profit five times what her employees make, or $250,000.

First, I’d like to emphasize that we cannot claim the owner’s salary is unfair because we do not know how much capital she has invested in the business. She should be paid twice, once as a worker in the business and a second time as an owner getting a return on her investment. Her net salary could be the same $37,500 salary as everyone else plus a $150,000 return on a $3 million investment. If she is only getting a 5% return on her investment, she is being underpaid for the risk she is taking.

Assume that these numbers are fair according to the economics of supply and demand, but now the government is going to single out the rich to pay more taxes and relieve the middle class of paying their fair share. In fact, we are going to let the workers enjoy a tax rate of zero while we heap their share of taxes onto the company owner. 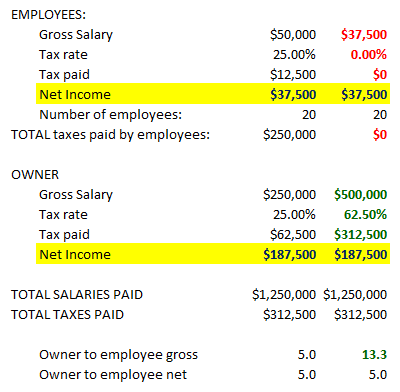 There are at least four effects of dumping all the taxes on the owner.

First, the employees’ salaries dropped to pay the owner’s additional tax. This can and will happen as we strangle business owners with taxes. Some owners may reduce salaries across the board to pay for the firm’s additional taxes. Other will avoid this outright retribution and simply hold salaries constant until inflation accomplishes the same end. Many will simply not hire and ask their employees to be more productive to compensate. Whatever the means, there will be an effect of trickle-down taxes.

Second, the ratio between the gross incomes of those at the top to the average will increase even while the ratio of net income stays the same. In other words, because a progressive tax imposes most of the tax burden on those at the top, they have to earn a lot more just to pay the tax. The more progressive the tax code, the more economics has to compensate to provide the same return on investment.

Finally, taxes on the rich are seen as a solution to government’s runaway spending. The middle class will wonder why their incomes are dropping from $50,000 to $37,500 while the rich get richer. In fact, the government is getting 62.5% of every new dollar. Taxing the rich doesn’t produce any additional resources for government. It just shifts whose paycheck they need to flow through. It doesn’t matter if Mom or Dad pays the bill. The family is still poorer when government spends an ever higher percentage of the gross domestic product.

Taxing the rich remains a popular sound bite. But everyone loses when we discriminate against dollars depending on who is earning them. And the ones most hurt by these taxes will be the most vulnerable who need the kind of small business investments that stimulate new employment.