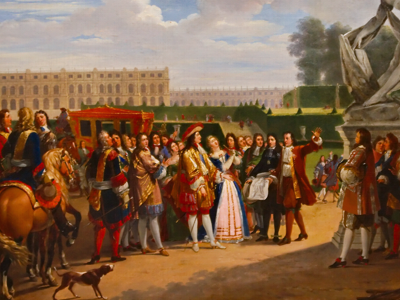 Rather than critiquing the power wielded by our modern government officials, some people criticize the money spent corrupting the democratic process. But money is only attracted to power worth corrupting.

Modern historians often praise King Louis XIV of France (1643–1715) as a clever politician and criticize him as an extravagant absolute monarch. For 72 years, Louis wielded all the legislative, executive and judicial powers of France. He made the laws, enforced the laws and punished the offenders of his laws.

Historians notably do not judge the king’s courtiers, who did everything they could to sway the affairs of state to their advantage. With so much power, the king’s table naturally had aristocrats and other officials begging for a bit of leftover political favor.

Louis XIV built the extravagant Palace of Versailles to house his government officials as well as wealthy sycophants. He lived in a central series of rooms, literally and symbolically at the center of the French government.

The Duke of Saint Simon wrote, “His Ministers, generals, mistresses, and courtiers soon found out his weak point, namely, his love of hearing his own praises. There was nothing he liked so much as flattery, or, to put it more plainly, adulation.”

When ruled by a man with absolute power, doing whatever is necessary to protect your interests is simply what rational courtiers ought to do.

Today U.S. politicians put our businesses and citizens in a similar position. The notoriety necessary to win an election costs money, and selling political favors is the way to raise those funds.

Some people rightly criticize this role of money in elections. They say the democratic process depends on each person having an equal voice. But currently only a small minority are wealthy enough to determine the pool of viable candidates.

As a result, candidates throw extravagant banquets for wealthy donors, who in turn gain an audience with the rising leader to further their own private interests. This dance of flattery between prospective officeholders and special interests is a well-practiced show.

Louis XIV loved ballet, and along with flattery his favor could be won by taking an interest in the art. The king danced so well and so often, his performance rivaled professional dancers.

His first ballet after becoming king was a travesty because the courtiers who volunteered to participate were not ballet dancers. They were just performing to protect their own interests.

The courtiers of our politicians today don’t have to be the ones who dance. Instead, we have labor unions, corporate consortiums and professional lobbyists to flatter and donate their way into political favors.

Much of such political giving is defensive. Government officials can shake down any industry, special interest or labor union for billions of dollars using the threat of legislation that will cost them trillions.

Congress has the power to discriminate. Their threats are not idle. Legislators could pass a whole array of discriminating mischief. Some argue they already have. The more power Congress acquires, the more our hopes and fears depend on their favoritism. This process does not make any constituents or donors happy.

The courtiers of Louis XIV were not satisfied with their life of flattery either. Historians often comment that relocating the courtiers to Versailles lessened their regional power. It encouraged them to focus their lives on the centralized government rather than their responsibilities to their constituents.

Current pending legislation will accidentally have this effect on American taxpayers. In the name of getting money out of the democratic process, the proposals would pour more money in by subsidizing each voter’s political contributions.

One proposal would award a refundable tax credit for the first $500 of any federal tax paid. Another would provide an election-funding voucher that could be given to any candidate who agrees to play by a specific set of rules. A third gives $5 directly to candidates for every dollar they raise from individuals up to $100 per contributor.

In each proposal a portion of the political donation would be provided by the federal government. In one, the funds would be borne by a small fee on large government contractors. Another would just be a rebate of income taxes.

One proposal prohibits members of Congress from receiving contributions from any industry or entity they regulate. Another requires refusing to accept any money outside of what it received through this mechanism. Others require disclosures or promises.

Legislating our taxpayers’ money to support Washington, D.C., further lessens the power of every person who participates.

Money is not the source of the corruption in Congress. The problem is that Congress has so much power worth corrupting. Subsidizing political bribery so everyone can participate does not help keep it out of the democratic process.

Although money may be a corrupting influence in the process, it is not the primary problem. There is no money corrupting the election of prom king. The power of the office is not worth the money it would take to corrupt it.

Likewise, there is less corruption in elected officials at the state level. The office of lieutenant governor has little corruption when compared to the office of president.

But Congress can redistribute billions of dollars from one class of citizens to another. It can discriminate between industries, devastating one and subsidizing another. It can make common sense illegal and make abrogating personal freedoms commonplace. Whenever a government has absolute power like King Louis XIV, it will also have sycophants cozying up to the inner court.