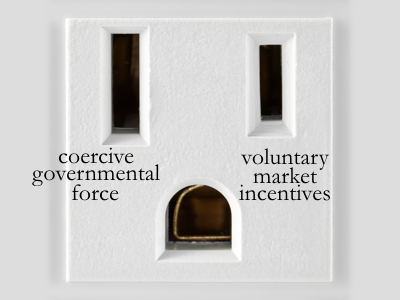 Americans continue to talk past each other by using a similar vocabulary while really discussing very different concepts. Previously I examined how those with a utopian view of the world (liberals) seek equal results, whereas those with a more tragic view (conservatives) only seek a fair process. I argued that most of the work toward equality of results not only fails, but it harms society’s complex incentives in the process. Regardless of good intentions, the result impoverishes everyone depending on how much force is applied.

Views also differ on the concept of power. To utopians, the exertion of power explains society’s unhappy circumstances, which they believe result from the privileged exerting power for selfish motives. Their solution is to centralize power in the hands of people who are sincere, well intentioned and reasonable and thus direct it toward more lofty goals.

Those with the tragic view sharply disagree. They view selfishness as inherent in human nature. So long as people are still free to choose without penalty, they would call it influence, not power.

For example, imagine that business magnate Warren Buffett asks you to quit your current job and work for him for a guaranteed five years at an annual salary of $2 million. Does Buffet have power over you, or do you still have all the options you had before his offer? Those with a utopian view of the world judge power by the outcome. If Buffett can entice you to work for him, then by definition he has exerted power over you.

Those with the tragic view welcome Buffett to exert this type of free market influence. But in the utopian worldview, there is no free market. Rather liberals think markets are manipulated by big corporations. These powerful forces manipulate the markets only to serve their own interests. Evil is epitomized by these greedy and selfish forces that must be brought under control to serve common interests.

Those with the tragic worldview believe sweeping reforms aimed at centralizing power in government are among the most dangerous actions society can take. In their view, the market is made up of innumerable individuals and companies. It is very efficient at providing its own negative feedback. And it is very good at setting prices based on scarcities, technological advances and consumer preferences. No centralized planner is omniscient enough to know or omnipotent enough to control the complex variables in a free market.

Any time government tries to force one variable within a free market to a certain value or to move in a certain direction, it destabilizes every other variable. And the more variables it tries to control, the greater the instability of those it leaves free to move with market forces. This is why the utopian perspective sees increased centralized planning and control as the solution to most societal problems. As a result, for example, banks are forced to loan to those with dubious credit histories, nearly bringing down our financial markets.

I divide the idea of power into two categories. The first is the use of violence or any coercive power. The second is wealth or any power that relies on rewards. Those with the conservative view fear coercion much more than the influence of wealth.

But with coercion I am not given a choice. My options are restricted to only those that they have decided to allow. I say “decided to allow.” I would say “in the best interests of society,” except that is not the way those with the conservative perspective would view it. Even if it is in the best interests of 80% of society, society includes the other 20% who used to be free to pick a better course of action and now are forbidden by law. Only if you allow freedom of choice can it truly be best for all of society.

To those with the tragic view, dealing with the so-called problem of economic influence by increasing and concentrating the known evil of political power is ludicrous and naive. Perhaps the worst case is the cronyism of government favoring some corporations over others.

So when General Motors is in deep financial trouble, the government intervenes. Left on its own, GM would have survived after reorganization but with very different owners. Instead, the legal rights of bond owners and shareowners were ignored. The government seized control of the company and gave ownership to the United Autoworkers.

Then the government instituted the program familiarly known as cash for clunkers, giving away $3 billion to support its newly owned company. Aside from scrapping perfectly serviceable older vehicles and moving potential sales forward six months, it was a very inefficient way to add a handful of new sales to their new company’s bottom line. The government also imposed hybrid car tax credits to favor GM’s line of vehicles. None of these decisions made economic sense.

It is difficult to call the bailout a triumph simply because GM is now profitable. That’s like calling it a success when someone steals your car with the help of the police and then gets great gas mileage. GM might well have recovered faster or better without government intervention. The specific cost to bond holders and the general cost to society would have been smaller.

The coercive power of government is more dangerous than the free market specifically because special interests always use it to circumvent the legal and/or economic system. GM came to be in government and union hands through coercive power. Ownership was taken by force, and no measure of subsequent spoils to those who pirated it can justify the way it was seized.

Many utopians mistake government working with private enterprise as business-friendly support for free markets. Nothing could be further from the truth. When the referee starts playing on the field, the game is no longer fair. And if the referee scores more than the competitors, the game is not a success. Such intervention is the definition of fascism, socialism with a capitalistic veneer.

In a true free market, if you don’t benefit from doing business with someone, you have options. Liberals do not offer you a choice. They can and do change laws to seize and favor businesses that should fail and to punish their competitors. That is the most dangerous power.