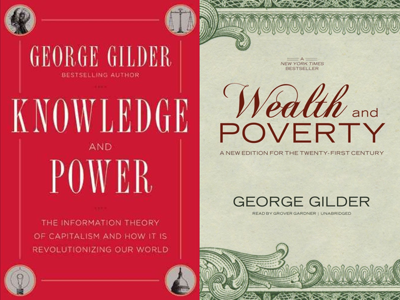 There is a nice article by John Tamny entitled “The Essential George Gilder Explains How Economies Work” in which he covers some of the material in Gilder’s latest book, “Knowledge and power.” Most people do not understand how markets and economics work. They assume that the economy doing well and the stock market going up are roughly the same things. And they assume that a nice quiet and controlled environment is healthier for the economy than the shocks and turmoil we sometimes experience. One only has to look at the life-span of well-fed zoo animals to know that there is something wrong with this idea. Attempt to control the economy and make things safe actually make things worse. Here is a quote from Tamny’s article:

Gilder regularly writes of high and low economic “entropy.” To put it into his words, the “economics of entropy describe the process by which the entrepreneur translates the idea in his imagination into a practical form.” Importantly, so that entrepreneurs can be creative, government must be a “low entropy” input.

So true, and there lies the answer to our unimpressive growth under Presidents Bush and Obama. Government spending is a tax and both spent/spend a lot, trade has become less free, regulations (think Sarbanes-Oxley, Dodd-Frank, and Obamacare) have increased, and the dollar has been in freefall for twelve years. Economic growth is so easy, and the answer to the seeming riddle of low entropy creativity is the political class itself.

There is a lot of implications in that paragraph. In the next paragraph he confirms my article, “The Election Should Be Settled by a Single Question: Who Caused the Financial Crisis?”

In the eyes of this reader money, as in a stable unit of account in terms of value, is easily the most important low-entropy economic input that will foster high entropy. Happily Gilder asks the important question here, specifically whether “the fundamental cause of the [financial] crisis was that the monetary system, alone among the structures of capitalism, lacks a low-entropy physical layer?” Absolutely it was.

If more voters understood economics there would be a lot less politics.