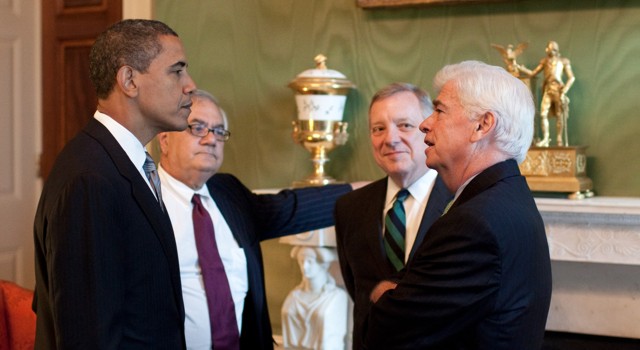 Congress recently passed the Dodd-Frank bill. At the signing, President Obama claimed, “Because of this law, the American people will never again be asked to foot the bill for Wall Street’s mistakes. There will be no more tax-funded bailouts . . . period.”

Washington excels at blame shifting. The financial crisis began and ended with the exercise of political privilege and power. Fannie Mae and Freddie Mac were given a lending environment superior to the private sector while the latter was forced to loosen lending requirements beyond reason. The blame for the financial meltdown belongs on federal regulators, not on a lack of regulation.

But beyond all this blame mongering is the assumption that the current legislation can bestow enough power in the hands of a few to steer the course of global finance for the better. As William F. Buckley, Jr. has often remarked, “Idealism is fine, but as it approaches reality, the costs become prohibitive.”

The bill mostly just asks federal agencies to make sure that nothing bad happens in the future. It doesn’t really tell them how to do that. But it does make it clear they will be held accountable. And they can’t complain they didn’t have the needed authority or clout. In the bill they are given a wide range of new and unchecked powers to do whatever it might take to make sure bad things don’t happen.

Unfortunately, we now have to fear their exercise of these powers. Only if you swear by the genius of Caesar, trust in his altruism and believe in his divinity is this bill a cause for celebration.

For example, the bill creates a Financial Stability Oversight Council. The ten regulators in this group have the task of monitoring any systemwide risks in our financial system. They have also been given nearly unlimited power to address these risks by forcing financial firms to sell assets or close a portion of their business.

The utopian hubris of believing such a group will do more good than harm is unfounded by human history and experience. And the assumption that such a council will be untouched by self-interest is naive beyond belief.

In the chapter on politics in his book “The Blank Slate,” Harvard psychologist Steven Pinker says, “We are all members of the same flawed species. Putting our moral vision into practice means imposing our will on others. The human lust for power and esteem, coupled with its vulnerability to self-deception and self-righteousness, makes that an invitation to a calamity, all the worse when that power is directed at a goal as quixotic as eradicating human self-interest.”

Congressmen Christopher Dodd and Barney Frank themselves were given the simpler task of overseeing Fannie Mae and Freddie Mac. Their own self-deception and self-righteousness led them to defend and even praise Countrywide’s reckless lending practices. In the meantime, they accepted more than $2 million in campaign donations from Countrywide, Fannie Mae and Freddie Mac.

The new bill is ripe for lobbying by special-interest groups. Almost all of the actual rule writing has been delegated to regulators. The legislation will be revised endlessly for decades, and all the power players with a stake in the game will be able through their contributions and lobbying efforts to leave their fingerprints on the rules.

Such concentrated power will be used to benefit one firm at the expense of another. The winners will be the most powerful financial firms, lobbyists and legislators. The losers will be smaller banks and financial firms, fee-only fiduciaries and consumers. Anyone who doesn’t have millions of dollars at stake will not be a big enough stakeholder to bother gaming the system.

According to the Washington Post, “Some liberals have criticized the bill for failing to more aggressively alter the structure of Wall Street and for leaving so many critical decisions to federal regulators, who missed many of the warning signs before the crisis.”

“‘It’s the dumbest argument I’ve ever heard,’ Dodd countered. ‘What do they expect me to write, a 100,000-page bill? This is far beyond the capacity, the expertise, the knowledge of a Congress to detail every new regulation,’ he said.”

Truer words could not have been spoken. Such work is also far beyond the agencies to which Congress has delegated the task. The bill is 2,319 pages long. It establishes 355 potential new agency rules. It mandates funding 47 studies. And it requires 74 different reports.

It will probably create more jobs than any of the bailouts efforts. But none of those hires will be working for consumers. Their number-one priority will be their personal reputation and power. Only tangentially will any of their interests align with yours.

None of this work will encourage competitiveness. No one will manufacture products for sale. These efforts will produce no real wealth. And hundreds of the potential new rules have nothing to do with financial stability.

The report has thousands of potential unintended and unanticipated consequences. For example, the Federal Reserve will now be authorized to limit the swipe fee that credit card companies charge merchants for debit card transactions. Such price controls have popular support. After all, who wants credit card companies to rake in high fees? But price controls are never good economics.

This is a consequence of price controls. Transactions that all parties would otherwise want to make become illegal. Either the price control is set too high and has no effect or it is set below the equilibrium and upsets the balance, making the service disappear altogether.

Maybe the genius of the Fed will set the swipe fee limit high enough so it will have no unintended consequences. But Fannie Mae and Freddie Mac should have been able to set lending requirements high enough to avoid the financial crisis in the first place. If politics did not allow something that simple, we certainly won’t avoid mistakes with regulations as complex as this bill invites.