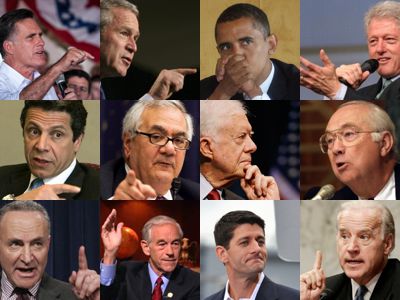 The presidential election should be settled by a single question: “Who caused the financial crisis of 2008?” President Obama’s entire campaign has centered on his claim that he inherited a mess caused by the failed policies of the past. If those policies are free enterprise and little government intervention, you should vote for his reelection. But if Obama and his party caused the financial meltdown, you should vote them out of office.

Blaming Wall Street is a convenient rubric. Our list of usual candidates includes the rich or influential. But government legislation has the force of law and applies to everyone. Big Government politicians are more powerful than individual banks.

You have to ask, “Why were banks so eager to give mortgages to people with no income, no job and no assets? Wasn’t there a built-in disincentive? And if they were to blame, why did the government get stuck with the problem?”

It all began with the Community Reinvestment Act (CRA) of 1977 under President Jimmy Carter. Its goal was to reduce discrimination against people in low-income neighborhoods by FDIC banks. The law did not provide any criteria for equal process. Thus any bank whose lending results were called into question could be challenged. And banks needed regulators to approve their actions.

The CRA increased the oversight of financial institutions and empowered organizations such as the Association of Community Organizers for Reform Now (ACORN). Obama’s work as a community organizer included working as ACORN’s attorney suing banks in Illinois.

Obama was on the team suing Citibank. The class action lawsuit charged that “applications were rejected because of their race or color, or because of the racial composition of the neighborhood in which their property was located.” The plaintiff in the case had been “denied because of delinquent credit obligations and other adverse credit.” The suit charged that the denial was motivated by discrimination.

It is now claimed that the suit sought to end redlining, the discriminatory practice of refusing to write mortgages in minority neighborhoods. But the fact is that Citibank approved 51% of the loans in these neighborhoods.

Citibank settled the case. Part of it included “organizing a lending consortium to assist low to moderate income loan applicants in obtaining mortgages.”

Since then, about 1 in 4 of the nearly 200 plaintiffs has declared bankruptcy, about the same rate as subprime mortgage default. You decide if the discrimination was racial or creditworthiness.

In the last election campaign, it was vehemently denied that Obama had been an ACORN trainer until the New York Times uncovered records demonstrating he was.

Andrew Cuomo was the assistant secretary of Housing and Urban Development (HUD) and then secretary under President Bill Clinton from 1993 through 2001. Cuomo created 800 new HUD employees who were paid as much as $100,000 to fight against abolition of the agency. These community builders, as they were called, worked with local groups to lobby against tax cuts and to aid Democratic candidates.

Under Cuomo’s leadership in 1998, HUD forced banks in Texas to lend $2.1 billion in affirmative action loans with a higher risk and higher default rate.

President Clinton touted these achievements. In 1998 he boasted, “In the 20-year history of the Community Investment Act, 85 percent-plus the money loaned out under it to poor inner-city neighborhoods has been loaned in the five years since I’ve been president.”

Fannie Mae and Freddie Mac were on the path to disaster. Now Obama blames deregulation under the Bush administration for the financial meltdown, but there was none.

After Clinton, George W. Bush and Republicans tried to tighten up lending standards for which they were demonized by the Democrats. These efforts were pushed unsuccessfully throughout the Bush administration starting in April 2001.

Ranking Democrats Barney Frank and Charles Schumer led their party to block these efforts in the fall of 2003. Frank made light of Republican concerns. He said, “I think we see entities that are fundamentally sound financially and withstand some of the disaster scenarios. And even if there were a problem, the federal government doesn’t bail them out. But the more pressure there is there, then the less we see in terms of affordable housing.”

Even Clinton admitted, “The responsibility the Democrats do have may rest more in resisting any efforts by Republicans in the Congress or by me when I was president to put some standards and tighten up a little on Fannie Mae and Freddie Mac.”

People mistake banking actions taken in concert with politicians as the free market. The worst the truly free market can do is go bankrupt with no public bailout.

But in 1999, Democrats led by President Clinton and Republicans led by Sen. Phil Gramm repealed the Glass-Steagall Act of 1933. Glass-Steagall had kept regulation and FDIC insurance quarantined to a small part of the financial markets.

Democrats agreed to support the bill only after strengthening provisions of the anti-redlining CRA.

Repealing Glass-Steagall removed the barriers between traditional and investment banking, placing everything under congressional rules and regulations. Ron Paul voted against the repeal because it included taxpayer backing of wild-bet derivatives.

Without Glass-Steagall quarantining traditional banking, the government incentives and rules were expanded and spread to the entire financial system. To quote Paul, “My main reasons for voting against this bill are the expansion of the taxpayer liability and the introduction of even more regulations. The entire multi-hundred page S. 900 that reregulates rather than deregulates the financial sector could be replaced with a simple one-page bill.”

Banks normally loan money between themselves as needed by providing mortgages and other capital as collateral. Part of the financial meltdown was the inability of banks to determine the validity of another bank’s collateral. As a result, normal day-to-day short-term loan transactions ceased and the velocity of money went to zero.

The crash in the money supply caused the value of money to spike. No one wanted barrels of oil or shares of stock. The stock market lost half its value as money doubled in value. A barrel of oil dropped from $140 to $32. The first bailout was passed on a bipartisan basis to solve this problem in the credit markets. Although I disagree, many claimed this first bailout was necessary. Subsequent bailouts were used for very different partisan purposes. Little justification can be made for them.

The only thing worse than Big Government acting on its own is Big Government acting with crony capitalism to override the consequences of the free market. I’ve added links to the online version of this article at MarottaOnMoney.com with links that support this conclusion: Well-intentioned legislative efforts can cause massive harm. And the greater their scope, the greater the harm.

Barack Obama and the Democrat Party cannot fix meddlesome regulation with even more regulation. Don’t vote for his reelection even if that means you must vote for Gary Johnson, the Libertarian candidate.