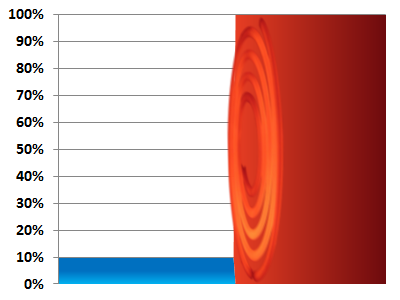 To start with an obvious example, let’s assume the tax rates on a business start at 10% and after a certain point reach 100%. How much money would be collected at the 100% rate? The answer, of course, is zero. No business would bother earning more money only to be obligated to give it all to the government.

Many statistics would hide this change of behavior. The average tax rate on businesses would seem a low 10%. But decisions are not made at the average. They are made at the marginal rate. When your hand first touches a hot stove, your average body temperature is still normal. Nevertheless you recoil quickly. Increasing marginal rates are like a hot stove to additional productivity.

Businesses are like rich people. They can decide how much income they want to realize each year. Capping the income of otherwise productive companies is economically destructive. Not only does it restrict productivity and the creation of wealth, but it also limits employment and taxes paid.

Imagine there is a proposal for a flat 20% tax. Liberals rage that would mean doubling the tax on the poor businesses while giving Big Greed an 80% tax cut. But what is the effect? Businesses that would have truncated their earnings no longer hold back. Productivity jumps and unemployment drops. All this while the tax collected could more than double. 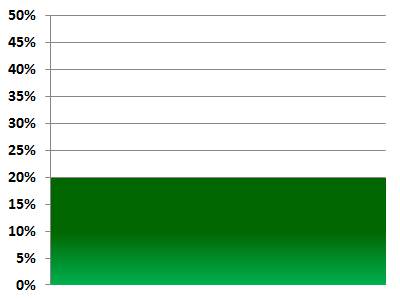 Now that an obvious case has established the concept, let’s look at smaller tax progressions. Remember that all economic decisions are made at the margin. There has to be a decision, and we have to look at the marginal tax change.

One such decision is how much money you should convert from a traditional IRA to a Roth IRA each year. The more you convert in one year, the higher the tax bracket you get pushed into. Waiting until next year to convert the money is always an option, especially because you can decide to unconvert, or recharacterize, the money any time before you file your taxes.

Getting pushed into a higher tax bracket sets up a hurdle that the conversion account must appreciate before keeping the conversion makes financial sense. Some of the hurdles are extremely high, even at very low incomes.

If you could wait until next year to convert at the 10% rate again, when would it be advantageous to convert this year even if it pushes you into the 15% bracket? In other words, what is the hurdle of added productivity you must surpass to overcome this minor increase in the marginal tax rate?

It turns out the hurdle is a 50% annual return on your money. Unless your $100 grows to $150, you would pay less tax waiting until next year and converting at the lower rate. Ten percent of $150 next year is equivalent to 15% of $100 this year.

Those who favor a progressive tax system do not realize that a small increment of 10% to 15% can truncate any decision to be more productive unless you have a good chance of earning more than 50% over the next year.

If you think the poor can’t or don’t make such decisions, you are mostly wrong. The poor fear dropping off entitlement cliffs more than they do hitting the wall of higher taxes. And a vague perception of the effects causes most to err on the side of avoiding paying taxes or jeopardizing their benefits. There are places where it can cost you multiple dollars of benefit for every additional dollar you earn.

The middle class and wealthy have even more discretion over the timing and amount of their income. We encountered such a case recently: clients with a base income of about $69,000 for whom we were considering a Roth conversion. Our federal Roth calculator computed they should convert up to the top of the 28% tax bracket, an additional $143,000 so long as their Roth account had not lost money. This would have resulted in the federal government receiving an additional $38,000 in tax revenue.

The hitch was that these clients live in California. Virginia state taxes reach their maximum after only $17,000 of income. Beyond that point the rate is a flat 5.75%. But California tax rates are highly progressive, with rates from 1% all the way up to 10.3% for income over $1 million. In our clients’ case, realizing this additional income would push them from the 6% state bracket to 9.3%.

The hurdle for this marginal tax increase is a 55% annual return. A hundred dollars taxed at 9.3% this year is equivalent to $155 taxed at 6% next year. The effect is that neither the federal government nor California will be collecting that additional tax this year or ever.

A progressive tax code discourages productivity, actually rewarding you for producing less. This system destroys much growth in the economy that would flourish otherwise. Purposefully doing this simply so the rich have less is evil, and it hurts society as a whole. Listen in political debates when the term “rich” is used with emotions that make it almost an economic slur.

Our current system is complex enough to create many entitlement cliffs and marginal tax walls throughout the income spectrum. Tax simplification would eliminate many of these barriers to economic mobility and encourage greater productivity across the board. And one of these changes is a flatter tax and fewer deductions.