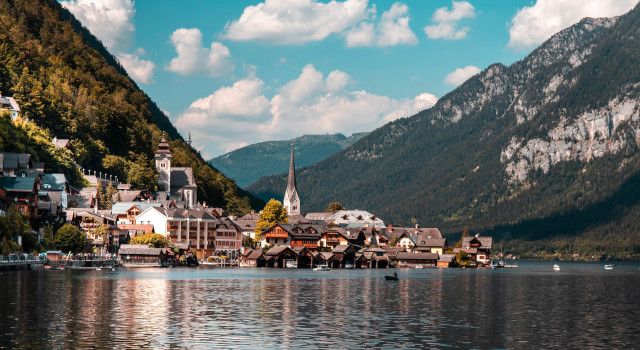 After touring Venice our U-14 girl’s soccer team headed from Abano north along the white water rapids of the Etsch River. We past castle fortresses, Counter Reformation onion-domed churches and beautiful waterfalls to the sounds of Brittney Spears and the Backstreet Boys as we headed through the Brenner Pass, the lowest of the Alpine Passes, and into Austria.

According to the Heritage Foundation study of economic freedom, Austria is the 19th freest economy in the world. Austria’s 2005 score at 2.09 puts it just over the “free” category making it and Germany the two best in the “mostly free” category. The Heritage foundation’s best score for Austria was in 2000 when, for one year, it qualified as “free” at 1.98 instead of “mostly free.”

In recent years the United States has reduced some of the taxes that impede small business growth. For those of you with family businesses you realize how much taxing corporate business profits slows your ability to expand your business.

GDP growth in Austria, although the highest among the three countries we visited, is still only at 0.7%. This slow rate of growth is typical in old Europe and a direct result of excessive regulation and the high fiscal burden that the government lays on the private sector.

Austria does not make foreign investment easy. The country is inflexible, has high barriers to market entry, and imposes elaborate regulations. Because of these problems, prices are among the highest in the European Union.

Austria has one of the highest per-employee costs of fringe benefits at about 100% of base salary. Austria’s pension system has problems similar in nature to our Social Security insolvency. Their current plan is to cut benefits to future retirees in the private sector. Despite these costs, Austria is still relatively free and unemployment relatively low at 4.6%.

Much of Austria’s economic freedom is the direct result of the most famous Austrian economists, Friedrich August von Hayek, who won the Nobel Prize in 1974. Hayek is best known for writing “The Road to Serfdom” – his steadfast defense of liberal democracy and free-market capitalism against a rising tide of socialist and collectivist thought in the mid-20th century.

By the 1980’s his ideas finally found favor and rose to policy under Ronald Reagan in the United States, under Margaret Thatcher in Great Brittan, and then under Kurt Waldheim was reimported back into Austria.

Hayek’s “The Road to Serfdom” is one of the five great classics of free-market theory. A thoughtful reading of the book is a requirement for anyone who believes that social justice means an equality of results.

Hayek warns, “From the fact that people are very different it follows that, if we treat them equally, the result must be inequality in their actual position, and that the only way to place them in an equal position would be to treat them differently. Equality before the law and material equality are therefore not only different but are in conflict with each other; and we can achieve either one or the other, but not both at the same time.”

The Social Democratic Party (formerly the Socialist Party) used to advocate heavy state involvement in Austria’s key industries, the extension of social security benefits, and a full-employment policy. But beginning in the mid-1980s, it shifted its focus to free market-oriented economic policies, balancing the federal budget, and European Union (EU) membership.

Dr. Heinz Fischer, the current President of Austria, grew up in Vienna during the Nazi occupation. Because of this, he explains that opposition to totalitarianism was “imprinted” on him. Many in Austria welcomed the Nazi occupation. Recently Fischer said, “We have to know what to be proud of and what we should be ashamed of.”

As Hayek himself wrote, “It is indeed probable that more harm and misery have been caused by men determined to use coercion to stamp out a moral evil than by men intent on doing evil.”

As a result of this free-market thinking, Austria is one of the twenty countries with the highest economic freedom. For our larger clients, we overweight investments in these countries. So far this technique had proven effective at boosting our international stock returns.

The soccer team also had a winning strategy in Austria, playing the Bavarian Saaldorf Football Club and winning 5-1. After the game we enjoyed a dinner with opposing players and their parents. The game was incredible and the team never played better.

Austria’s stock market returns have been incredible as well. IShares Austria (EWO) has a one-, three-, and five-year annualized return of 42%, 40%, and 26%, respectively. These returns are all 25% more per year than the International Index.

Thanks to Hayek, Austria is on the road back from serfdom and the country’s investments are experiencing the dividends of economic freedom.

Photo by Eitan Rudinsky from Pexels