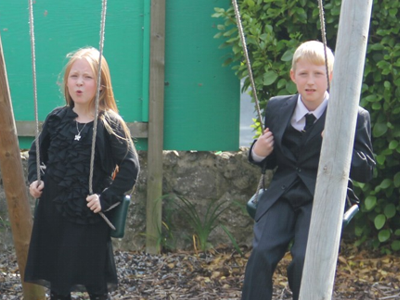 America has always been known as a land of opportunity where you can pull yourself up by your own proverbial bootstraps. However, somewhere along the way, pulling yourself up in this inefficient way became the only socially acceptable way to stand.

Tetra Pak is a Swedish company best known for the packaging that allows milk and orange juice to be stored without refrigeration. The company was founded by Ruben Rausing, who died in 1983.

He passed the company on to his sons Gad and Hans. Gad bought out Hans but died in 2000. He left the company to his wife, Birgit Rausing. She was a retired art historian and most often described as a philanthropist. She died recently.

Her children, Jorn, Finn, and Kirsten, inherited the company. Forbes, which regularly lines up billionaires from richest to poorest, ranks Jorn at number 223 with $5.2 billion and Finn and Kirsten, with $1 billion less, tied for number 239. Their uncle Hans ranks at number 94 with $11 billion after receiving his brother’s $7 billion buyout payment in 2000.

Jorn, Finn, and Kirsten aren’t the richest kids in the graveyard, but they are certainly among them.

For some reason, people lose their compassion when money is inherited. They forget that you can only inherit from your parents if they die and leave you an orphan. In many cases, the term “trust fund kid” is just another way of describing a cared for orphan.

When Oliver Twist inherits a fortune, we rejoice. But when people like Jorn, Finn, and Kirsten inherit, many of us turn jealous or even enraged.

In the Rausing family, each generation has inherited a piece of the company founded by Ruben Rausing. For Birgit’s three living children, corporate ownership means they continue to reap the benefits of the company’s profits today.

Jorn, Finn, and Kirsten don’t deserve it. Birgit was gracious to give them this gift. And you shouldn’t hate the recipients of grace.

We are reminded of the stereotypical student-teacher drama where a young creative teacher comes to a troubled school and strives to educate the bored and alienated teenagers. There’s almost always one student of interest, a boy or girl struggling to learn the material. Then comes that special scene in which the teacher offers an amazing deal: one-on-one tutoring after school. Even though the teen has difficulty, he or she comes to the tutoring, reaps the benefit and performs well on the exams in the end. We all cheer. What a great teacher!

We applaud even though the teacher only selected one student to tutor and all the rest of the students weren’t given that gift. We cheer because we know the teacher didn’t have to do that. It was a gracious gift for the teacher to help the student in that way.

Inheritance is really no different. Before we die, we have the opportunity to leave any of our possessions to anyone we choose. Birgit was known for her philanthropy. She could have just as easily left the $15 billion to her favorite art museum. However, she recognized that the betterment of her children was a worthy cause, and just as so many others do when they craft their estate plans, she left the money to her children.

It was her right to pass it on. It was gracious of her to choose her children.

An article about billionaire children who inherited part of their wealth that also served as the obituaries of Birgit and other billionaires provoked 328 comments. Readers responded to the text like mad hungry dogs, thrashing and biting at this list of mourning children. “How disgusted I am at these excuses for human beings,” one commenter writes. This response was typical.

One person summarized the thoughts of the pack, saying, “I truly don’t understand the mentality of people who just hand money to heirs rather than contributing to a useful cause of some kind.” Another chimed in, “That is exactly the reason why we should have 100% inheritance tax and 0% income tax.”

One brave soul fought the current: “I started in the bottom 1% and ended in the top 1%. What are my children supposed to do? Start over? Take what remains at my death and give it to the government so it will be squandered? Great idea.”

He was attacked in 11 responses, many just amounting to, as one commenter put it, “boo hoo! poor you,” but his point was accurate.

The two measures of equality are equality of means or equality of outcome. If means are equal, all participating agents are subjected to the same rules, regulations and circumstances at the start. All agents begin on an equal playing field.

If outcomes are equal, all participating agents may be subjected to very different rules, regulations and circumstances to force their outcomes to be the same. All agents end on an equal playing field.

As we have said previously, studies suggest that liberals and conservatives often split on which is the appropriate measure.

Inheritance, almost uniquely, has the ability to anger both those who believe in equality of means and those who believe in equality of outcome. Imagine a wealthy father who was able to amass more wealth than another similar dad; this is inequality of outcomes. And then that wealthy deceased father passes his fortune on to his one child while the poorer dad passes on very little and divides it among his three children. This creates an inequality of means for the next generation.

Although equality may divide party lines, the jealousy and bitterness surrounding inheritance may not be divided. Most people just hate heirs.

They hate them so much, they cry for a 100% death tax, without even thinking of the implications.

Imagine a single urban mother who has worked her whole life not only to provide for her children but also to amass a small savings account to be divided among them at her death. You surely would not claim that the government should take the inheritance of these children.

Or imagine a grandfather who loves to work on his family farm until the day he dies. He wants to pass the farm on to his granddaughter, who bonded with him over the work. Estate taxes already make this exchange nearly impossible, short of the granddaughter already secretly owning millions to pay off the estate taxes. Imagine if the inheritance tax was 100%. Family-owned and run farms, businesses and summer camps would be doomed short of the next generation having enough wealth to buy out the previous generation.

With gift taxes, capital gains and estate taxes, there is no real strategy, short of having extra piles of money just to pay taxes, for a family business to get passed down to the next generation. And yet there is no reason to believe that confiscating that wealth for government spending is morally superior.