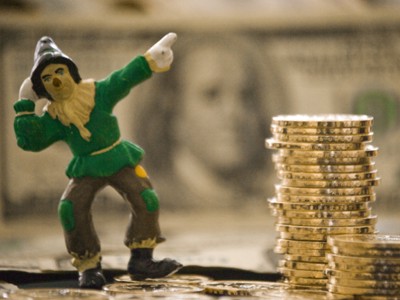 It used to be that becoming a millionaire was regarded as a huge achievement. In today’s dollars, however, it is fairly trivial. According to the Department of Labor’s inflation calculator, $1 million today was worth only $183,285 in 1970. But $1 million in 1970 had the same buying power as $5,456,005 today.

That’s the new rich: over $5 million.

Depending on your lifestyle, if you have amassed $1 million at age 65, you may not even have enough to retire. At age 65, you can withdraw only 4.36% of your assets each year to ensure you don’t deplete your savings before you die. So if you are just a millionaire, you must be able to live on an annual income of $43,600. And if your lifestyle demands twice that amount, you don’t have enough money to retire yet.

Many of our parents and grandparents were fortunate enough to have pension plans that continued to pay their salary in retirement. Even though they never had a large investment account, those guaranteed benefit plans were extremely valuable. A pension paying $43,600 a year starting at age 65 is worth $1 million in the bank. Our parents and grandparents were truly millionaires, although they didn’t know it!

But the days of defined benefit plans are over. Most employers today provide defined contribution plans. They define the amount they contribute to your retirement, usually in the form of matching dollars, and you are responsible for saving a sufficient amount and investing it wisely. Thus employees must amass $1 million for every $43,600 they’ll need when they retire.

All this information leads us to the most important lesson about wealth. You can live rich or you can be rich. Many people live as though saving and investing wealth is wrong. Yet consider the alternative: Is spending every dime you earn virtuous? Isn’t it better to produce more than you consume? Isn’t it preferable to consume less and therefore have more wealth that you can invest and put to work creating jobs and producing goods? After all, the economic definition of capital is deferred consumption. Can you put off spending or decline to consume long enough to create investment capital that creates factories, businesses and jobs so others can benefit?

Consider two families with identical incomes. Family A lives rich, buying high-definition TVs, indulging in luxurious vacations, dining out frequently, and so on. Family B chooses to save and invest instead. Which family is wasteful and addicted to wealth, the family that is living rich or the one that is growing rich?

Family B may live simply and modestly below their means during their entire working careers. Amazingly, for every $100 a month they save and invest at 10%, they will have $1 million more when they retire. The two families may have the same income, but Family A spends $250 each month on a richer lifestyle and Family B retires with $2.5 million in assets. Interestingly, one of them we encourage, help and support and one we envy, tax and ridicule.

The members of Family A who have lived rich will have no assets at retirement and will further strain the Social Security and Medicare systems. We perceive them as the truly needy when in fact they have lived life as the truly greedy. They could have taken care of themselves, but instead they burdened society simply by ignoring their retirement.

To add insult to real societal injury, these same people often claim they just don’t care about money. They are above amassing wealth and instead just live to enjoy themselves. If they truly were indifferent about money, however, they would be able to live on 15% less than their take-home pay and save and invest the difference.

A couple we know just retired with $2.5 million after working and earning quite modest salaries. They lived simply and practiced frugality. Nothing was wasted. They waited a few years before purchasing the latest technological gadgets and then bid for them on eBay. They made do or did without. They grew rich by shopping at sales and avoiding impulse buying on credit.

Now that they have managed to save $2.5 million, however, some of the presidential candidates have suggested increasing the tax on investment gains to 28%, rather than taxing the consumption of those living rich. That will mean if your investment assets earn an 8% return, you will be unable to make any progress toward your goals. Five percent of your return will just keep up with inflation, and you will owe 2.24% for a 28% capital gains tax. You would only be left with a 0.76% real return after taxes and inflation.

We won’t be able to help the truly needy until a majority of Americans realize they are part of the problem. People’s failure to save for their retirement stresses our governmental programs with those who ought to be multimillionaires. Saving just a few hundred dollars a month over your working career makes the difference.

No matter what your income, a similar family is living off half of your salary and still saving more than 15% of their take-home pay. Another family is earning twice what you earn and struggling to make ends meet. Nearly every family we work with wishes they had an extra $10,000 a year to make life easier.

Greg Mankiw, a professor of economics at Harvard, offers an interesting analysis: “If we compare the incomes of the top and bottom fifths, we see a ratio of 15 to 1. If we turn to consumption, the gap declines to around 4 to 1. Let’s take the adjustments one step further. Richer households are larger–an average of 3.1 people in the top fifth, compared with 2.5 people in the middle fifth and 1.7 in the bottom fifth. If we look at consumption per person, the difference between the richest and poorest households falls to just 2.1 to 1.”

That’s the difference. The richest 20% in America live 2.1 times more extravagantly per person than the poorest 20%.

Another study by Mark Aguiar and Erik Hurst shows that leisure used to be evenly divided among the classes, but it isn’t any longer. Although Americans as a whole have an extra four to eight hours of leisure per week (or about seven extra weeks of leisure per year), this extra leisure has not been gained evenly. About 10% have no more leisure than they did in 1965. These hard workers, it turns out, are highly educated and have had the largest gains in income. At the other extreme, about 10% have gained 14 hours a week or more (over 18 extra weeks of leisure per year). These excessive gains in leisure have gone, oddly enough, to those who are the least skilled, least educated and have the most stagnant incomes.

It used to be the leisure rich or the idle rich. Now it is the working rich and the idle poor.

Decide to be rich. Your retirement, and the country’s welfare, depends on it.