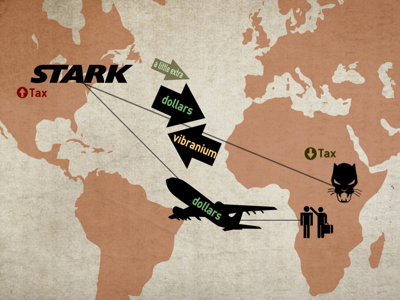 Voluntary trade benefits both sides, even in the global economy and even when benefit is distributed unequally. Worrying about a trade deficit, or a trade surplus, is largely useless. Countries with trade surpluses benefit from trade because they use the unspent foreign currency to invest in their prosperous trading partner. Countries with trade deficits benefit from how cheaply they’ve bought foreign goods.

The balance of trade does not count the investment of capital. Trade and capital accounts always balance. A capital surplus means a trade deficit and vice versa.

Intra-firm trade is the movement of goods between branches of the same corporation. Such trading occurs all the time. An international company based in America owns storefronts across the globe. They can acquire the necessary raw materials wherever the global price is best. To meet a high domestic demand, more raw materials may be imported to the United States. And this intra-firm activity is counted as a trade imbalance.

Consider Stark International, the fictional multinational firm of Tony Stark (Iron Man) from Marvel comics, featured in the film “The Avengers.” Stark International manufactures high-tech equipment that requires a fictional metal called vibranium. In the Marvel universe, it is used to manufacture everything from Captain America’s shield to the adamantium for Wolverine’s claws.

Such purchases of raw materials still count as U.S. imports in balance of trade. This causes a trade deficit, even though it is entirely intra-firm trade.

The trade deficit reflects the fact that Wakandans have a surplus of American currency. Many places in Wakanda accept dollars as local currency. So Stark International’s Wakandan vibranium mine can pay its employees with this foreign currency. Many who earn these U.S. dollars use them to travel to America and study the refining and use of vibranium in the States. Others use the currency to buy stock in U.S. publicly traded firms like Stark International.

These currency movements offset the trade deficit by eventually bringing all of the dollars home. However, this capital surplus does not count in the balance of trade and leaves a massive trade deficit with Wakanda.

According to Forbes’s 25 largest fictional companies, Stark International has estimated sales of $20.3 billion. If even half that amount is profit, the company might owe over $4 billion in U.S. corporate taxes.

The corporate tax rate of Wakanda, one of the countries with the most economic freedom, is half that of America. Stark International, with a corporation in both countries, has an incentive to move its U.S. profits to Wakanda. There the tax will be paid at a more favorable rate. Such a strategy might be accomplished by even slightly overpaying the Wakandan branch for vibranium. Exporting Stark International’s profits to Wakanda would be a legal way to avoid U.S. taxes.

Thus the trade deficit is twofold. First, the high U.S. corporate demand for foreign labor and raw materials alone causes a trade imbalance. Second, international firms have a further incentive to move their profits into the possession of their foreign counterparts.

Because America’s top corporate taxes are among the highest in the world and intra-firm trade allows corporations to set their own prices, both branches of an international American company have an incentive to overpay the foreign branch for the raw materials. Paying a little more than is necessary, they are able to move the tax burden into a country with a lower corporate rate while still acquiring the materials they need to continue to meet American demand.

With a higher dollar value transaction for these imported raw materials, this makes the value of imports that much greater and further increases the trade imbalance.

Bringing those dollars back to the United States through intra-firm trade subjects the profits to American taxes again. Thus foreign branches of international corporations keep money overseas to invest and create more jobs, rather than bringing the profits home. An estimated $2 trillion of U.S. corporate profits are trapped overseas in this way.

In 2004, George W. Bush allowed a tax holiday so corporations could bring profits back to the United States and only pay a flat rate of 5.25%. All of Western Europe allows its multinationals to repatriate billions of dollars without paying the normal corporate tax rates.

If America didn’t have such high corporate taxes, the trade imbalance would likely decrease. Corporations wouldn’t have an incentive to overpay. The American branch of the corporation would retain more of its profits to invest and create jobs here. If we lowered the rate far enough, we might see a reversal of the trade imbalance. Foreign branches would want to keep their profits here in low corporate tax America.

If the United States competed better on tax policy, we might have much less of a trade deficit. As it is, the unintended consequences of keeping the current punitive corporate tax code starves our country of capital.

The high corporate tax rate pulls the profits of all corporations, from small businesses to multinational firms. However, it also has the unintended consequence of incentivizing further profit loss of international firms to their foreign counterparts. All of these corporations could have used those lost profits for U.S. jobs or expansion. Instead, most is lost to government revenue while the rest is given away to foreign corporate expansion.