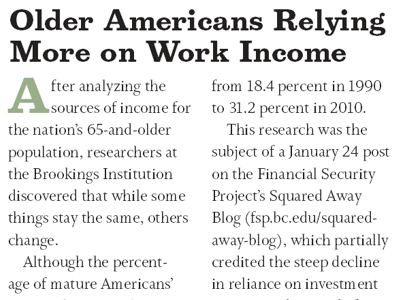 The Journal of Financial Planning’s March 2013 issue had an article entitled, “Older Americans relying More on Work Income” which read in part:

While working past age 65 is a great way to stay active and healthy, many may be working out of necessity. Securing your retirement financially is too important to leave the process up to chance and guessing. You should take a measure of your net worth each year in order to measure your progress toward becoming financially independent.

This allows you to make small constant adjustments which will have great effect in the years before retirement. You should also be projecting your optimum timing to take Social Security and planning on having sufficient after tax assets in order to do Roth conversions during the gap years.

This is one benefit of working with a financial advisor.