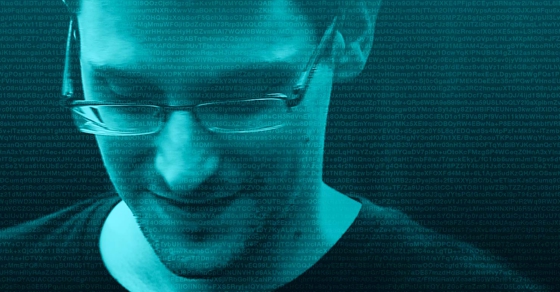 While stranded on foreign soil, cooped up in a hotel room with reporter Glenn Greenwald and filmmaker Laura Poitras with arguably the strongest world power out for his blood, Edward Snowden said, “The greatest fear that I have regarding the outcome for America of these disclosures is that nothing will change.”

In 2013, Snowden revealed the U.S. government was actively pursuing the constant surveillance of everyone’s digital life.

“Citizenfour” came to major U.S. theaters recently. Laura Poitras’s project began as a film about government surveillance. When she was contacted by Snowden, his revelations became the documentary.

The film received an R rating for nine instances of coarse language . This shallow justification for an R caused the IFC Center to waive the 17-year-old requirement and suggest that all socially minded high school students are welcome, especially those on the cusp of voting age. “Not only do we feel the film is suitable for teens, we feel it is essential viewing for anyone who may vote in the next election,” they explained.

Poitras’s film unfolds like a home movie documenting the sacrifices of all those involved, especially Snowden. Viewers of the film experience the NSA revelations through Poitras’s eyes. We receive encrypted messages from someone called “Citizenfour,” meet Snowden in a Hong Kong hotel room and listen as the truth is revealed. The paranoia sets in as fire alarm drills seem to shrill an ulterior motive. But we watch as Snowden remains amazingly polite in the face of extreme attacks.

He gave up much of his own personal freedom trying to warn us about the government’s abuses. History should record Snowden as a hero.

“Citizenfour” does not offer new revelations, but it does present information in a very different way. Rather than a factual report by Greenwald in the Guardian, this is a quiet look at what had to happen for those factual reports to be written. It personalizes the sacrifice made to warn us what the government was trying to conceal.

At one point in the film, Greenwald chuckles about the paranoia in the room. It is a paranoia that later gripped the nation and the world.

It is commonplace now to hear someone joke about being put “on a list” for what they’ve written. Or their association with someone increasing the chance they might “disappear in the night.”

We laugh as though these are jokes. On some level, they are. For most of us, the only parties interested in tracking, watching and developing a profile on us are the advertising agencies.

But on another level, we can’t truly laugh at these jokes. We know now how true they could be and are. We now know that at least 1.2 million people are on the U.S. federal watch list. An unknown number more are on the president’s kill list (also known as “targeted killing policy”).

Other than the paranoia, surprisingly little has happened. The list of people who everyone knows intentionally lied to Congress has gotten longer. James Clapper, director of National Intelligence, has joined the ranks.

In March 2013, Clapper answered, “No, sir,” to Senator Wyden’s question “Does the NSA collect any type of data at all on millions, or hundreds of millions of Americans?”

Snowden talks about the incident the best. He said, “I would say the breaking point was seeing the director of National Intelligence, James Clapper, directly lie under oath to Congress. There’s no saving an intelligence community that believes it can lie to the public and the legislators who need to be able to trust it and regulate its actions.”

Two months later, Snowden revealed the NSA data that proved Clapper lied. Clapper wrote to the Senate a month after that saying, “My response was clearly erroneous–for which I apologize,” essentially pleading guilty to perjury in a congressional hearing.

In January 2014, President Obama said that he had “full faith in Director Clapper’s leadership of the intelligence community.” Clapper subsequently prohibited employees from speaking with the media even on nonclassified matters .

To date, Clapper has received no trial or punishment for his deception.

Although Obama once said he welcomed the debate about this issue, at every turn he has blocked those efforts. The government has claimed that no one has judicial standing to challenge the government’s surveillance actions. Freedom of Information Act requests are denied because the information is classified.

Obama says that governmental officials are not listening in real time but has never acknowledged that phone conversations are being recorded for later review.

President Nixon resigned in 1972 while under impeachment proceedings for covering up the fact that administration officials were bugging activist groups and political operatives. The smoking gun of Watergate was a tape proving the president had lied and covered up the truth for over two years.

When compared to the current administration’s magnitude of constitutional violation and surveillance, the lies and cover-up of Watergate look like a misdemeanor.

Snowden cannot return to the United States and receive a fair trial. There is no defense against the charge of espionage. Even if it is ultimately shown that the government’s actions are illegal and unconstitutional, Snowden will still be found guilty.

Obama went to Stanford University recently to “call for more cooperation between private companies and the government when it comes to defending against cyber-attacks .” The chief executives of Google, Facebook, Microsoft and Yahoo all refused to attend a private lunch with the president. They are understandably angry about the government’s surveillance programs.

Obama said Silicon Valley companies were only upset by “the impact it had on their bottom lines .” In reality, the secret backdoors and illegal hacking into their systems angers them. But Obama turns everything, even the desire for freedom, into class warfare.

We should all be as outraged as Silicon Valley CEOs. State-sponsored data breaches are just as wrong from our government as from North Korea. U.S. companies, which should be recognized for excellence in cybersecurity, are known instead for their inability to keep data confidential.

The domestic spying of the executive branch deserves our outrage. Efforts like “Citizenfour” that keep the issue in the public eye deserve our support.