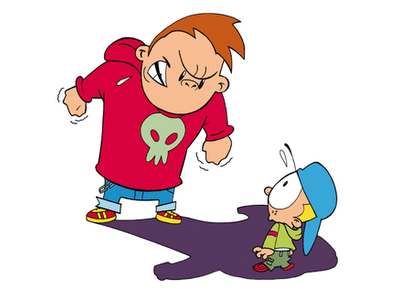 Bullies are common characters in stories. They intimidate others by threatening to wreak general havoc in the life of their victim. They often don’t have to follow through on their threats. Their general size, weapon accessories or intellectual capabilities justify that they mean business. Not to mention that they frequently prey on those weaker or with fewer minions to back them up.

It is the capability of the bully rather than actual actions that allows a bully to dominate his victims. We obey and give him our lunch money because he could beat us up, not because he does beat us up.

The same is true in the quintessential crime drama. When one character pulls out a gun, the game changes. Suddenly her capability to shoot someone motivates all the other characters to behave more obediently.

This March, Richard Ledgett, NSA deputy director, was interviewed by Chris Anderson at a TED Talk in Canada. Ledgett said, “The NSA is a capabilities-based organization.” They have the capability “to pursue [bad guys]” and have “the capability to go after them.”

When confronted with the massive reach of the NSA, Ledgett tried to justify this power. He said Americans need not fear because “the controls are in how I apply that capability, not that I have the capability itself.”

In other words, I have a gun, which could be pointed at you, but don’t worry because I have self-control. I won’t point it at you yet.

Glenn Greenwald, the journalist at The Guardian who worked with Snowden, had a very different take. In an interview with CATO Institute, Greenwald said, “This is what the existence of a surveillance state does, and it’s what Jeremy Bentham recognized, which is that if you can create institutions where the people you are trying to control–inmates or students or patients in a psychiatric ward–know that they can be watched at any moment, even if they don’t know when they are being watched or if they are being watched, the fact that they know that they can be watched at any moment means that they will assume that they are always being watched and therefore will act accordingly–meaning in compliance with the dictative authorities.”

Even the phrase “I have nothing to fear because I have nothing to hide,” Greenwald claims is a sort of bargain. He says, “If you become sufficiently obedient and compliant and passive and non-threatening, . . . you can be unmolested by power.” He reminds us that “in even the worst tyrannies, people who don’t bother tyrants are never or rarely targeted with oppressive behavior.”

He repeated those sentiments this March when he was interviewed by Chris Anderson at the same TED talk as Ledgett. Snowden said we should be able to live our lives “without wondering about how these events are going to look to an agent of the government, possibly not even your government, years in the future.”

Many of us have been reminded of George Orwell’s novel “Nineteen Eighty-Four” about a dystopian political future where “Big Brother Is Watching You.” You can be punished for thinking socially unacceptable thoughts, or “thoughtcrimes.”

John Whitehead—local attorney, author and founder of The Rutherford Institute, a nonprofit civil liberties and human rights organization whose international headquarters are located in Charlottesville–wrote “Orwell’s Nightmare: The NSA and Google—Big Brother Meets Big Business.” He said, “What Google’s vast acquisition and analysis of information indicates is that we are entering what some have called an age of infopolitics, in which the human person is broken down into data sets to be collated and analyzed, and used for a variety of purposes, including marketing, propaganda, and the squelching of dissent. As philosopher Colin Koopman notes, we may soon find ourselves in a more efficient version of the McCarthy era, in which one’s personal beliefs or associations become fodder for the rising corporate surveillance state.”

Anyone who has read the Orwell novel remembers that Big Brother is terrifying because he is watching you, not because he is threatening to feed you to hungry rats, which does happens to the main character. Watching is sufficient to create tyranny.

We liken it to the policy of mutually ensured destruction used by countries with nuclear weapons. The threat of annihilation is sufficient to create obedience and cooperation.

In Snowden’s March 2014 appearance, he urged technological leaders as well as average citizens to take back the Internet. He saw reform occurring not in the halls of Congress but in the cubicles of computer programmers: “We need to encode our values not just in writing but in the structure of the Internet.”

Remember, remember the fifth of June, when Edward Snowden sacrificed his life that you might fight to regain yours before it was too late. This is one of the most critical issues of our time. Those who stand by and do nothing are complicit in aiding the loss of freedoms for others. We all must fight to protect the rights of others. Be more outraged.