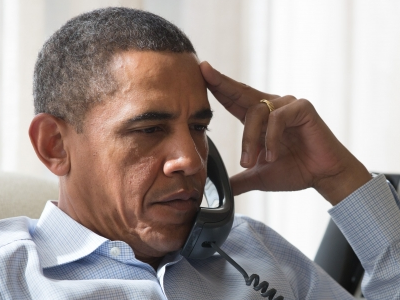 The Espionage Act of 1917 criminalizes disclosing information “relating to the national defense.” Prior to the Obama administration, only three espionage cases had ever been brought. Since Obama took office, eight whistleblowers have been charged with espionage.

1. In September 2002, several federal employees filed a complaint with the inspector general (IG) of the Department of Defense about the abuse and potential illegality of an NSA program.

To encourage program reform, Drake spoke with reporter Siobhan Gorman in November 2005 about unclassified information that resulted in a series of award-winning articles.

Meanwhile, President Bush ordered the FBI to research the information leak. Their efforts concentrated on the 2002 complaint, even though it wasn’t the source of the leak. Armed FBI agents raided the houses of three of the instigators. Drake’s house was later also raided and his data confiscated.

In 2010, the Obama administration prosecuted Drake for espionage. He did not want to “plea bargain with the truth,” but subsequently pled guilty to exceeding authorized use of a computer, merely a misdemeanor. The 10 original charges were dropped.

2. In 2008, Stephen Jin-Woo Kim was hired by the State Department to specialize in North Korea’s nuclear program.

The following year Kim spoke with James Rosen of Fox News about North Korea’s recent missile tests. Rosen’s subsequent article discussed the likelihood of North Korea defying UN sanctions. It made the Obama administration’s paper success of imposing sanctions seem less impressive. According to Kim’s attorneys though, the information was not classified.

Not knowing the source of the information, the administration investigated Rosen. They obtained a warrant for his Google records, claiming Rosen’s questioning of Kim indicated his “crime of conspiracy by undue flattery.” The FBI characterized Rosen as “an aider, abettor and/or co-conspirator.”

Never mind that the Supreme Court protects journalists under the First Amendment, saying reporters can ask any question without fearing prosecution.

From Rosen’s records, the leak was traced back to Kim, who was charged with espionage. He has pleaded innocent and is awaiting trial.

3. James Hitselberger, a collector of rare documents, worked as an Arabic translator for the U.S. Navy. He allegedly took four classified documents to his personal quarters at a U.S. military base in Bahrain.

Hitselberger was arrested and charged with three counts of espionage. He claimed he had not intended to include classified documents. He cited United States v. Rosen, which requires the government to show that the defendant disclosed information “with a bad faith purpose to either harm the United States or to aid a foreign government.”

His defense argued that the phrase “could . . . aid a foreign nation” is overly broad and criminalizes any information.

The judge in the case wrote, “The government concedes that Defendant has no history of violence and did not disseminate the classified information to a ‘foreign power.’” Nevertheless Hitselberger was held in prison without bond.

4. In 2009, the FBI contracted linguist Shami K. Leibowitz, who found classified information he believed showed a “violation of the law.” Leibowitz sent secret documents to Richard Silverstein, a blogger. Later, he said he regretted not pursuing other options within the government to report his concerns.

Federal authorities convinced the judge that Leibowitz had committed a “very, very serious offense.” Even the judge admitted he did not know what information was disclosed or how it compromised anything. Leibowitz was sentenced to 20 months in prison on a plea deal. He had to agree not to request any case documents or disclose any information he learned while working for the FBI.

5. For three years, former CIA officer John Kiriakou spoke to the press about the waterboarding of Abu Zubaydah. Kiriakou believed waterboarding, even once and with useful results, constituted torture. In 2010, it was revealed that Zubaydah was waterboarded 83 times in a single month.

In 2012, Kiriakou was charged for repeatedly talking to journalists and revealing Deuce Martinez as a CIA employee. However, Martinez had never operated undercover and had publicly posted his position as an intelligence officer. It was actually journalist Scott Shane who brought the name to Kiriakou.

Kiriakou pled not guilty to the charge but guilty to a different leak as part of a plea bargain. He was the second person to be convicted under the Intelligence Identities Protection Act (IIPA). CIA director General Petraeus heralded Kiriakou’s conviction as “the first IIPA successful prosecution in 27 years” and “an important victory for our Agency.”

Kiriakou is currently serving a 30-month prison term. He was awarded the Joe A. Callaway Award for Civic Courage for “[standing] up for constitutional rights and American values.”

6. Private Bradley Manning leaked over a half million documents to WikiLeaks, believing the material revealed “the true nature of 21st-century asymmetric warfare.” He released the material without discretion.

Among the material was the 2007 Baghdad airstrike video, popularly called the collateral murder video. Two Apache helicopters fired on a group of men killing eight of them including one war photographer. In a second attack, they killed a second wounded Reuters correspondent and the two unarmed men trying to help him.

Manning was acquitted of aiding the enemy. But he was convicted on multiple other charges including the Espionage Act. He received a sentence of 35 years.

7. In 2006, James Risen published “State of War: The Secret History of the CIA and the Bush Administration” including a CIA operation to impair the Iranian nuclear program with a flawed design. It backfired when a nervous covert scientist pointed out the flaws. The operation may have advanced Iran’s nuclear program by years.

Previous administrations endorsed the plan, but only the Obama administration pursued the source of the leak. The government intercepted e-mails to make the connection between Risen and CIA employee Jeffrey Sterling. Sterling was charged with espionage. He pled not guilty, and the trial continues today. The Justice Department is appealing several pretrial rulings that do not admit certain evidence.

8. Most recently, Edward Snowden leaked to the London press details of the massive clandestine surveillance and data collection within the United States.

He explained, “I don’t want to live in a society that does these sorts of things.” We and many others have covered his story recently. Snowden has also been charged with espionage.

Daniel Ellsberg said Obama’s use of the Espionage Act “is the recipe for a tyranny in this country. . . . Secrecy is essential to empire.”

Obama has said he welcomes a debate. But it is difficult to have a debate when you can jail your opponent every time he opens his mouth.