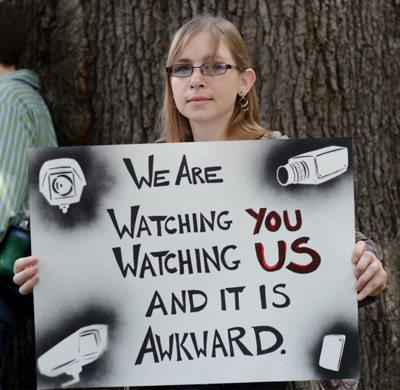 Edward Snowden, a former technical contractor for the National Security Agency (NSA) and employee of the CIA, leaked to the London press details of the massive clandestine surveillance and data collection within the United States. Snowden has now been charged with espionage. Most of us have not missed the irony of this accusation.

One of the leaked programs, PRISM, appears to work with trusted companies to collect as many facets of private communication as it can.

In June, London’s The Guardian reported, “A chart prepared by the NSA, contained within the top-secret document obtained by the Guardian, underscores the breadth of the data it is able to obtain: email, video and voice chat, videos, photos, voice-over-IP (Skype, for example) chats, file transfers, social networking details, and more.”

Internet communications take the cheapest route, not the most direct route physically. With a little government subsidy of electronic infrastructure, we can keep our route inexpensive and eavesdrop on the world.

Furthermore, when you talk on a cell phone, the sounds are already being encoded. Storing them is easy. The government can either compel the company or pay generously for it to store the information and keep quiet.

All this being said, the NSA is technically forbidden to spy on U.S. citizens. But just as the government can use extradition to deliver someone to a country that can torture, evidence suggests that the NSA may be outsourcing the actual spying and monitoring to another country’s espionage system.

For example, AT&T uses Narus, an Israeli company, to process all of their tapped information. The phone call could be processed in Israel where they are not subject to U.S. law. Transcriptions are then given back to the NSA in an intelligence-sharing operation.

This doesn’t sound like the “circumscribed, narrow system” President Obama claims it is. Rather it is the largest dragnet of privacy violation in history.

Imagine if everyone’s life was completely recorded how many people could be charged with violations. Many people think their lives so blameless that nothing would be found even if they were followed for a decade. We suspect it wouldn’t even take a week to find something on those we consider to be law-abiding Americans. There are just too many laws.

Connecting to an unsecure Wi-Fi without authorized access, singing “Happy Birthday to You” in public, placing large bets with your friends, failing to pay state use tax, speeding or failing to inform the DMV, IRS, and Selective Service (if male) of an address change are all illegal actions by so-called law-abiding Americans.

In the financial business, the compliance regulations are so onerous that about 70% of SEC examinations find deficiencies of paperwork and procedures. Having a perfect audit report is rare.

Snowden’s motivation for leaking the NSA’s surveillance programs is likely precisely what he has said: “I don’t want to live in a society that does these sorts of things.”

Snowden just told the truth. Now he is charged with espionage. Because he values his liberty, he fled the country.

We have to face the awkward fact that we live in a country where telling the truth about a massive clandestine government surveillance system means being charged with espionage. If Snowden hadn’t been willing to go public, we would still not know what our country was doing with our personal information.

We now know our normally private communications are collected regularly. The American people must respond. If there isn’t a strong enough outcry, these practices will become institutionalized.