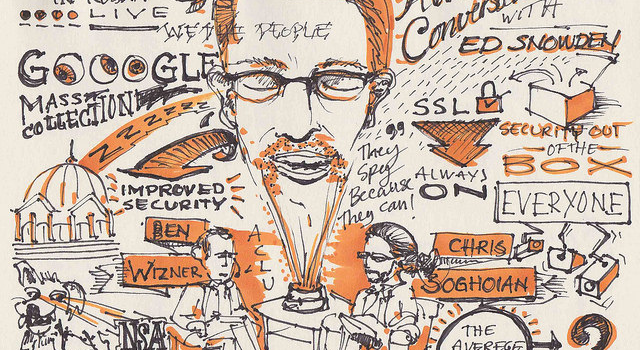 While stranded on foreign soil, cooped up in a hotel room with reporter Glenn Greenwald and filmmaker Laura Poitras with arguably the strongest world power out for his blood, Edward Snowden said, “The greatest fear that I have regarding the outcome for America of these disclosures is that nothing will change.”

On this day in 2013, Snowden revealed the U.S. government was actively pursuing the constant surveillance of everyone’s digital life.

Bullies are common characters in stories. They intimidate others by threatening to wreak general havoc in the life of their victim. They often don’t have to follow through on their threats. Their general size, weapon accessories, or intellectual capabilities justify that they mean business. Not to mention that they frequently prey on those weaker or with fewer minions to back them up.

It is the capability of the bully rather than actual actions that allows a bully to dominate his victims. We obey and give him our lunch money because he could beat us up, not because he does beat us up.

The same is true in the quintessential crime drama. When one character pulls out a gun, the game changes. Suddenly her capability to shoot someone motivates all the other characters to behave more obediently.

June 5 marks the anniversary of Edward Snowden’s release of information about the surveillance actions undertaken by the National Security Administration (NSA). Edward Snowden tried to pull back the curtain and show us the elements of tyranny hiding behind the democracy we love.

“The American people must respond,” we wrote those five years ago. “If there isn’t a strong enough outcry, these practices will become institutionalized.”

We have forgotten that privacy is our natural condition.

You are having thoughts right now. Without your communication of those thoughts, they will forever be private. They will be secret. Nothing I can do will relinquish those expressions from you short of your compliance to my request. This is the sense in which privacy is your natural condition. The essential self, the one of Descartes “I think therefore I am,” is inherently private.  That’s the whole reason solipsism (I can only be sure that my mind exists) can be a theory: Your thoughts are so naturally private that I may even doubt they exist at all.

And yet the government is scanning our persons and our houses, they are keeping copies of all our communication and correspondence, and they are logging all our information and opinions. This is not a choice. I signed no contract. I agreed to no privacy policy to tell them that they could do this.

As the Fourth Amendment of the Constitution puts it:

The right of the people to be secure in their persons, houses, papers, and effects, against unreasonable searches and seizures, shall not be violated, and no Warrants shall issue, but upon probable cause, supported by Oath or affirmation, and particularly describing the place to be searched, and the persons or things to be seized.

This is privacy. It is choosing how much of your things other people know about.

Without a right to privacy, my openness is not a great gesture of my love and trust of my fellow humans… it is a blatant seizure of my information. There is no virtue, no grand gesture, no beauty in what is acquired by force or seizure. The violation of my right to privacy makes my real gift of openness to a specific person a meaningless act.

It is commonplace now to hear someone joke about being put “on a list” for what they’ve written. Or their association with someone increasing the chance they might “disappear in the night.”

We laugh as though these are jokes. On some level, they are. For most of us, the only parties interested in tracking, watching, and developing a profile on us are the advertising agencies.

But on another level, we can’t truly laugh at these jokes. We know now how true they could be and are. We now know that at least 1.2 million people are on the U.S. federal watch list. An unknown number more are on the president’s kill list (also known as “targeted killing policy”).

There is an illusion that the executive branch will handle the collection of all our data with respect and care. It is a myth easy to perpetrate when you are listening to the polite and respectful Barack Obama speaking. I hope that the far more abrasive and disrespectful Donald Trump can shatter that illusion for you.

As the New York Times reported from Trump’s campaign trail, “Donald Trump Calls for Surveillance of ‘Certain Mosques’ and a Syrian Refugee Database.” I don’t know how Trump feels now, but let the chilling reality of what could be inspire you to activism.

Surveillance is the business model of the Internet. Most free online services make their money by gathering information on their users and selling it to advertisers. Most online tools are like a best friend who can’t keep a secret. She knows everything about you and just can’t wait to tell others. It takes a daring company to operate any other way, but there do exist many that try.