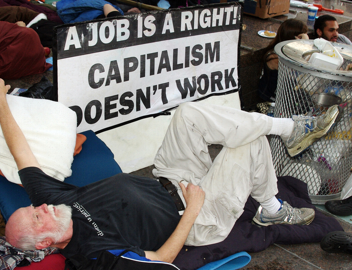 President Obama is not allowed to raise the minimum wage for the millions directly working for the government. That would require an act of Congress. That’s why in the State of the Union address, the president said he would “issue an Executive Order requiring federal contractors to pay their federally funded employees a fair wage of at least $10.10 an hour.” According to a fact sheet released after his speech, the jobs Obama believes this order will affect are the employees of federally contracted catering, laundry, janitorial and construction companies. He also confirmed it applies exclusively to new contracts.

If the president truly believed that raising the minimum wage would actually bring more compensation to the needy, why not raise the minimum wage to $20, $50, or even $100 per hour? If a little bit of extra value is good, isn’t a lot better? Why stop at a mere $10.10?

The truth is that every time the minimum wage increases, the number of victims increases too.

About 60% of minimum wage earners work in the leisure and hospitality industry, primarily in food and beverage services. Many receive tips and commissions that supplement their hourly wages.

Like playing a sport, working for pay is a skill learned by doing. Imagine the people who can’t get hired at a job paying minimum wage. They have little or no job history. Their communication skills are inadequate. Their education is incomplete. They are unable to follow instructions and even fail to arrive at work on time consistently.

Training a new employee is costly, not just in salary, but also in the loss of business from the person’s initial poor service and the time and effort expended by fellow workers to train and supervise the new worker. All this investment is often wasted when the person doesn’t pan out.

We’ve all been 16 to 25 years old, but minimum wage workers are the only 9% of this category unable to command a higher wage. They need a job, and they are often not motivated enough to maintain one.

Without an incentive to hire and train such workers, this demographic has none of the upward mobility lauded by President Obama. You can’t just wish that America’s business leaders will hire unskilled workers. You have to give them an incentive.

Currently there is a $5,400 a year incentive to hire a $7.50 per hour worker over a $10.10 per hour worker. If the trouble such a worker causes in the first two years is less than $5,400, the employer can gradually raise his or her wage up to $10.00 and will have saved a little money while potentially assisting a new worker acquire a more profitable career.

Most minimum wage employees receive a raise during their first year. They have learned the job skills necessary to command a higher salary and are on their way up. We need jobs at minimum wage to provide an entry point for the unskilled to begin their climb up the corporate ladder.

Everyone in our family started working at age 13 or 14. The salary was not as important as the job skills. If your children don’t start working until they graduate from college, they will be ill equipped to compete with those who have been practicing since adolescence.

We trap these young people in failing school systems, and then we remove all the bottom rungs of the corporate ladder that could have provided upward mobility. Since 2003, workers ages 16 to 19 have had the highest percentage of unemployment of any demographic. In January 2014, they represented 9.8% of those officially unemployed and had an official unemployment rate of 21.0% and a jobless rate of 76.0%.

Most workers would prefer to make a salary, regardless of the amount, rather than being consistently turned down for higher paying $10.10 per hour jobs. Furthermore, once they have a salary, they may receive pretax formal training and pretax medical coverage, each of which may be more valuable than a higher taxable salary.

Minimum wage and below is not meant to be a living wage. It is a starter salary for the benefit of the unskilled. Few workers remain at such a wage for more than a year. In fact, few workers’ first jobs are even at that level. But for those who enter the labor force without skills or training, jobs at or below minimum wage give them a chance to better themselves and prove their work worthy of a higher salary.

It is not clear if President Obama understands the economics. But he campaigns for a minimum wage hike and pretends it will solve employment troubles. All of us would prefer a higher salary. But the economics of the job market are complicated, and an executive order can’t grant America a higher wage.