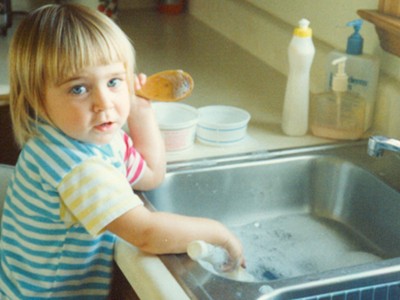 Childhood is a time of acquiring lots of behavior like how to talk, walk, and take care of yourself. Normally without conscious effort, most parents use operant conditioning in one way or another to teach their children these things. For example, in learning to speak, the child casually makes imitative sounds but is successively awarded for progressing towards the goal. Eventually, the child is attempting the word in order to receive the praise that comes from the success.

Just as learning to speak would be difficult if the child was never allowed to attempt to make the sounds, so too learning to deal with money is difficult if the child is never given the opportunity to attempt to handle it. Therefore, when it comes to teaching financial lessons, setting a good parental example is important, but actually giving the child some experience making wise financial decision is essential.

Allowances are the primary way that parents create this opportunity for their children.

Now, if giving “allowances” actually means occasionally giving children money simply by virtue of their family membership, then this method of teaching has unfortunate ramifications. In this model of allowances, children do not earn the money, and there is not a way for them to earn more of it. They receive it on an irregular schedule and in response to a wide variety of behavior. The unspoken lesson is that wealth is a reward of being alive. Most commonly allowance is lost only because of aging (“You’re too old for that now.”), taking more responsibility (“You should support yourself in college.”), or naughty behavior (“No allowance for this week, young lady!”).

In Psychology, we would call this learning system “negative-punishment operant conditioning.” Allowances make receiving money the norm of a child’s life. Then, when parents are trying to stop unhealthy behavior, they take away something the child normally has and likes having, in this case allowances, to prevent the behavior’s future occurrence.

There are two problems with this operant conditioning system. First, a negative-punishment operant conditioning schedule breaks habits but does not create good ones in their place. Although a child may successfully learn not to hit their sibling because they lose what they like having, this teaches them nothing about how they should behave. Negative punishment in isolation is not an effective teaching tool, simply a habit breaker.

Second, although this system may work at breaking habits, in the case of finances, it is not a very realistic model for how people receive money in life. As an adult, employers do not simply pay their employees for being part of the working family but rather they expect hard work in exchange for the wages. Not receiving money is the norm, and positive-reinforcement operant conditioning, one that encourages behavior with rewards, is used to foster hard work in employees.

Personally, I had no such “allowances.” Instead, I held my first job at the age of three. My employers were named Mom and Dad, and the conditions of payment were made explicit. Hanging on the wall of our house was a chart designed specifically for me that enumerated the tasks I needed to complete for the week in order to be paid. I am told that my earliest tasks were life skills such as making my own bed and cleaning my own dishes, but I remember cleaning the bathroom and emptying the cat litter when I was older.

My wages increased parallel to my age and the difficultly of my tasks. Pay day was on Friday night, at which time one of my parents would inspect the chore chart for completion. An incomplete chore chart would lead to decreased or sometimes even no payment, a chore chart completely filled out led to a complete payment, and going beyond your chore expectations often led to bonuses.

First, I learned that you can get paid to do anything that other people are willing to pay you to do. Jobs are created by employer’s desires not by the population’s expectations. Being a waitress may seem like a “proper” summer job, but many other “improper” jobs may earn just as much money. My parents paid me to make my own bed, local artists paid me to help with their advertising, and the UVa Psych department paid me to play computer games. I learned that if you would like to be paid to do something, you need only to find your market and take the entrepreneurial leap.

A second and related lesson is that things I liked doing might be worthy of paying. As a child, I was particularly excited by the task of cleaning the bathroom mirror. I liked using the squeegee to purge the dirt and soap from the glass to reveal my own reflection. My parents paid me to do this task. Now that I’m older, I am excited by the craft of web and graphic design. I like creating an aesthetically pleasing layout out of a blank webpage. Real employers pay me to do this task.

Third, I acquired money. This blessing was the enabler of all of my future money lessons. At a young age, I was given the resources I needed to learn my financial life skills. If my experience with money had been abstract, I’m not sure how I would have learned to save and spend money wisely.

Teach your kids through allowance where money comes from: hard work.