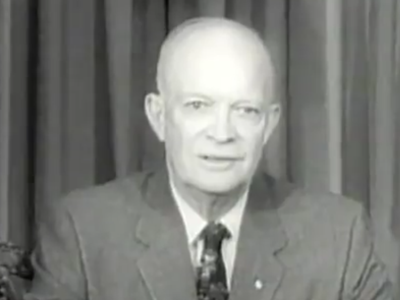 Dwight D. Eisenhower is often quoted from his February 17, 1953 News Conference in which he said,

The fact is there must be balanced budgets before we are again on a safe and sound system in our economy. That means, to my mind, that we cannot afford to reduce taxes, reduce income, until we have in sight a program of expenditures that shows that the factors of income and of outgo will be balanced. Now that is just to my mind sheer necessity.

This quote makes it sound like if Eisenhower were still alive today he would advocate keeping tax rates high or even raising them in order to balance the budget. And this quote is used by several contemporary liberal commentators to support higher taxes today.

And now, our last subject: taxes. In spite of some things that I have seen in the papers over the past 8 or 9 months, I personally have never promised a reduction in taxes. Never.

What I have said is, reduction of taxes is a very necessary objective of government–that if our form of economy is to endure, we must not forget private incentives and initiative and the production that comes from it. Therefore, the objective of tax reduction is an absolutely essential one, and must be attained in its proper order.

But I believe, and I think this can be demonstrated as fact by economists, both on the basis of history and on their theoretical and abstract reasoning, that until the deficit is eliminated from our budget, there is no hope of keeping our money stable. It is bound to continue to be cheapened, and if it is cheapened, then the necessary expenses of government each year cost more because the money is worth less. Therefore, there is no end to the inflation; there is finally no end to taxation; and the eventual result would, of course, be catastrophe.

So, whether we are ready to face the job this minute or any other time, the fact is there must be balanced budgets before we are again on a safe and sound system in our economy. That means, to my mind, that we cannot afford to reduce taxes, reduce income, until we have in sight a program of expenditures that shows that the factors of income and of outgo will be balanced. Now that is just to my mind sheer necessity.

I have as much reason as anyone else to deplore high taxes. I certainly am going to work with every bit of energy I have towards their reduction. And I applaud the efforts of the people in Congress that are going in that way. But I merely want to point out that unless we go at it in the proper sequence, I do not believe that taxes will be lowered. We might for the moment lower the “chit” you get for this year, but in the ensuing years, it would be a very different thing.

As you can see from the quote, Eisenhower did not favor high taxes. His point, however, is that it doesn’t help if government only taxes a little so long as it spends a lot. Because when government spends a lot it devalues our currency. And if government can’t keep our money stable they are in effect just taxing wealth which is held in dollars.

Eisenhower’s quote is often put in the context of the fact that the top marginal income tax rate in 1953 was 92%. The 92% tax bracket applied to income over $400,000 in 1953, equivalent to an income of $3,439,611 today. Since this tax bracket applied to very very few, the economic destruction was small. It was still a large disincentive for those subject to these rates, but the total effect on the economy was small.

It used to be that Republicans did not distinguish between the government taxing too much and the government spending too much. They believed that both incentives toward production (low taxes) and a stable currency (low deficits) were equally important. This was the Classic Economic View which later became more nuanced in the New Classic View when distinctions favored supply side economics. But neither of these two views were in favor of high taxes.