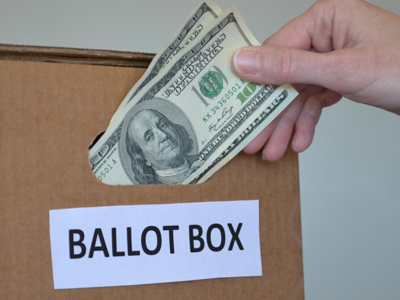 Voluntary trade benefits both sides. Unless both parties believe they will benefit from the exchange, they will not consent.

In most exchanges both parties can produce the item they are trading more efficiently than they can produce what they are receiving. Producing a surplus of one item provides each party something to trade for someone else’s surplus. Having more than your family needs opens the opportunity to trade the excess for profit.

Unfortunately, when property rights are weakened and the ownership of someone’s wealth or goods is debatable, people can gain more by trying to appropriate that wealth than by producing themselves. This behavior is called rent-seeking.

Rent-seeking frequently requires spending your own resources so you own someone else’s surplus in the end. In the public sector, for example, government lobbyists are hired to sway public policy to benefit their companies and punish their competitors. Although hiring lobbyists clearly benefits the company they represent, the work of lobbyists does not add value to the larger marketplace. If property rights on the surplus the company seeks had been more stable, such roles for lobbyists would never have been created.

Rent-seeking doesn’t add any national value. It is coerced trade and benefits only one side. Rent-seeking can include piracy, lobbying the government or even just giving away money.

Imagine a thriving sea trade in which ships carrying cargo receive a 20% profit on the value of the goods. Now imagine the first pirate who arms his boat with cannons and rent-seeks the profit. The pirates are not producing any value of their own but are spending their own resources to capture the surplus of the shipping trade.

If the pirate ship captures just one in every hundred ships, the average profit for the traders will drop to 19%. Meanwhile the pirate ship is seizing a 100% profit. There is incentive to join the rent-seeking pirate trade. By the time 10 pirates are competing for plunder, the profit of honest merchants has dropped to just 10%. At 20 pirates, there would be no profit remaining and no incentive to engage in the shipping trade.

The rent-seeking of pirates motivates merchants to spend their resources to prevent the theft. They sail with an armed escort. They pay privateers to capture the pirates. Even if these efforts cost 15%, they will still preserve a 5% profit. If the effort costs much more, however, shipping will simply cease. All of this expense could be avoided if incentives to be a rent-seeking pirate were somehow eliminated.

When I (David John Marotta) was applying for college, I was told that hundreds of scholarships, many based on merit, were available. After hours of research I found very few for which I qualified. I found one scholarship for a student of Italian-American ancestry. It was worth $1,000 and required me to submit an essay. It took me three hours to write the essay. I was engaging in rent-seeking.

You might think that giving away money is free, but it is not. Even if you hold a random lottery, potential winners still need to take the time to enter. At my $5 hourly wage, my entry cost me $15. I learned later they received 450 entries. If my experience was typical, the rent-seeking cost of all the applicants was $6,750 just to win a $1,000 scholarship. If you add the time to judge the competition and send return letters, the waste gets even greater.

Rent-seeking never encourages productivity. The production of valuable goods and services is maximized with strong property rights when little is wasted in efforts to seize the surplus of others or to prevent others from seizing our surplus.

During a strong economy there are fewer incentives for rent-seeking because production is highly rewarded. But when economic times make it more difficult to produce, it becomes more attractive to rent-seek someone else’s surplus.

This situation can create a downward spiral because the rewards of rent-seeking are often constant, whereas the surpluses available in a market economy are more variable. When the economy is poor, the burden of fixed rent-seeking costs on producers drives surpluses even lower. This makes rent-seeking relatively more attractive, which in turn further burdens those who try to remain productive.

Rent-seeking is a normal impulse. Much of what we do in wealth management is rent-seeking. Many of our clients have already produced all their income. After that, we practice tax management and look for ways to reduce government-legislated rent-seeking.

Tax planning doesn’t add value to society as a whole, but it can be personally profitable. In cases like tax planning, not to participate in rent-seeking when doing so would clearly benefit you is just a needless personal sacrifice. However, even if we exploit such an opportunity, we should still oppose the legislation that establishes these incentives in the first place.

Such legislation is prevalent in our government. Any efforts to subsidize or bail out struggling businesses are rent-seeking. When some banks take excessive risks to gain excessive returns, they are risking that the returns will be worth the hazards involved.

But when government bails out these risky banks, they give them a large advantage over their more cautious competitors. These banks are able to privatize any profits from their risky ventures, yet through rent-seeking they have managed to coerce the public to pay for their failures. Rather than having an incentive to lend prudently, there is a greater incentive to be categorized as too big to fail.

A wasteful amount of rent-seeking accompanies most government spending. Studies suggest that $1.5 trillion is wasted on public sector rent-seeking. However, because each individual is making a personally profitable decision even if it is a waste of resources overall, it is hard to move a society away from such unproductive behavior. The best way to improve the situation is to reduce the size of government. When there is less money, there will be less corruption and less incentive to rent-seek.