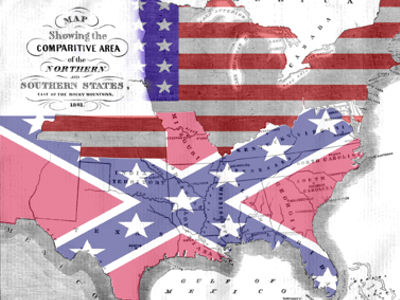 At the start of 1861, several Southern states seceded to form their own union under the Constitution of the Confederate States. The Southern Constitution was just a modified version of the original U.S. Constitution, but the edits were significant.

The South seceded largely over economic issues. Heavy hitting tariffs on manufactured goods protected Northern industries while making Southern costs skyrocket. Meanwhile, 90% of the Union’s revenue came from those tariffs and then was spent to help the North.

Slavery certainly was a factor in the Civil War. But it was partly the economic pressures on the South that made slavery an issue. Other countries were compensating slave owners, using federal revenue to ease the transition away from slavery.

In the United States, however, the North was tightening the economic screws. It exploited the South with tariffs and spent the revenue on its own largess.

Previous tariffs had been a percentage of the purchase price. The practice of providing a phony invoice for a lower amount alleviated much of the tariff’s harm. The Morrill Tariff removed this possibility. It required a specific duty per quantity of the imported item regardless of the purchase price.

With the South peacefully seceded, it was impossible to count on its cooperation. But Lincoln was expected to enforce The Morrill Tariff. A group of Virginian commissioners were deputized to determine if Lincoln would use force and suggested he abandon Fort Sumter.

Lincoln responded, “If I do that, what would become of my revenue? I might as well shut up housekeeping [a euphemism for federal spending] at once!” With 90% of his revenue coming from tariffs collected in the South, the Southern secession meant the union’s budget would take a cut.

He went on to say, “But what am I to do in the meantime with those men at Montgomery [meaning the Confederate constitutional convention]? Am I to let them go on… [a]nd open Charleston, etc., as ports of entry, with their ten-percent tariff? What, then, would become of my tariff?” Just a month before the start of the hostilities of the Civil War, Lincoln had tariff revenue on his mind.

Meanwhile, the Confederate States correctly judged the need for additional checks on the federal government’s power to tax some while benefiting others. The confederacy is often portrayed as the villain in popular media. But the Confederate edits to the Constitution would have helped prevent a lot of the federal mischief we’ve experienced.

The Confederate states added a prohibition on tariffs protecting specific industries and required all such taxes to be uniform throughout the country. Such a law removed the special interest lobbying and patronage that elected Lincoln. It was based on the more general principle that if the power doesn’t exist to discriminate between specific industries, there is no incentive to buy the right to wield that power for your own industry’s benefit.

They also removed the general welfare justification for collecting taxes leaving only providing for the common defense.

The general welfare clause was originally intended to limit the power of Congress and prohibit it from providing for special interest groups. It was included as a summary version of the 17 specific powers immediately following it. James Madison, principal author of the Constitution, argued that no one would misunderstand the general welfare clause and give Congress unlimited power. The specific limited powers, he argued, were “not even separated by a longer pause than a semicolon.”

Prior to 1936, the U.S. Supreme Court agreed in multiple cases. Then Franklin D. Roosevelt packed the Supreme Court with six extra Justices. The Court finally justified his 1937 Social Security Act and a host of other New Deal legislation under the misunderstanding that Madison had thought impossible. Since then, the general welfare clause has been used to justify nearly every aspect of the federal budget.

To the article giving Congress the power to regulate commerce, the Confederate Constitution adds “but neither this, nor any other clause contained in the constitution, shall ever be construed to delegate the power to Congress to appropriate money for any internal improvement intended to facilitate commerce.”

This additional clause was intended to stop the federal government from taking the money collected from everyone and use it to pay for one region’s development.

The only internal improvement the Confederate Constitution justified was work on harbors and rivers. However, such improvements had to be paid for using money collected from the people navigating them.

In the U.S. Congress, congressional favors were and still are passed by the slimmest of majorities. However, the Confederate Constitution solved this by requiring a two-thirds super-majority of a congressional vote before any federal funds could be spent. They believed the more impediments to legislative spending the better. If spending was disliked by as many as a third of Congress, it is likely we would be better off without it.

The Southern Founders also anticipated the congressional shenanigans of hiding large special interest spending projects inside otherwise helpful legislation. They added a presidential line-item veto, writing, “The President may approve any appropriation and disapprove any other appropriation in the same bill.”

Finally, the Confederate Constitution changed the term of the president to six years but prohibited the chief executive from serving two terms. Many of our former Presidents have agreed. The first year a president is trying to learn the job. The next three years he is running for reelection. Only in his second term, if then, is he taking the long view and thinking about his place in history.

We are thankful the Civil War ended the abominable practice of slavery in the United States. However, our gratitude for this social change causes us to overlook what the Confederate Constitution had to offer.