I read with interest Larry Elder’s viewpoint in Investors Business Daily entitled, “Ratio Of Takers To Givers Reaches A Tipping Point” in which he wrote:

James Madison, the fourth U.S. president and the “Father of the Constitution,” warned against using the document — especially the “general welfare” clause — to dispense money, no matter how well-intended or deserved:

“With respect to the words general welfare, I have always regarded them as qualified by the detail of powers (enumerated in the Constitution) connected with them. To take them in a literal and unlimited sense would be a metamorphosis of the Constitution into a character which there is a host of proofs was not contemplated by its creators.”

When Congress appropriated $15,000 to assist French refugees in 1792, an appalled Madison wrote, “I cannot undertake to lay my finger on that article of the Constitution, which granted a right to Congress of expending, on objects of benevolence, the money of their constituents.”

“Too many takers — not enough givers.”

Probably the most interesting portion of the article was the graph showing how much the share of Americans not paying any federal income taxes has increased in recent years: 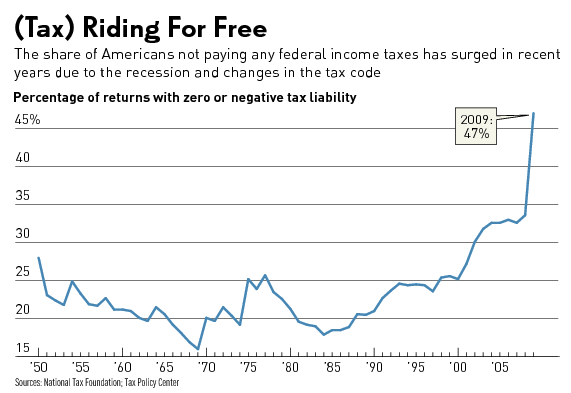 Many complain that the rich are not paying enough and that the rich are getting richer. I’ve written earlier in “Which rich are you trying to tax?” that those productive small business owners with higher earnings are a different group from the ultra-wealthy with a higher net worth. In that I quoted the IRS statistics showing “the number of American tax filers with incomes of $1 million or more had declined by 39% between 2007 and 2009.”

This is what makes the stock market in some countries better or worse than others. Make sure that you understand freedom investing for your portfolio!