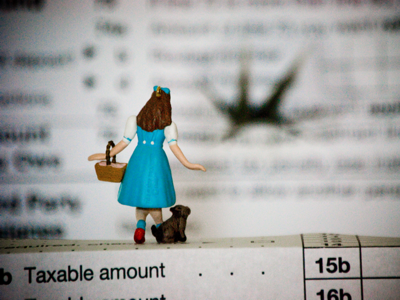 In his inaugural address in 1801, Thomas Jefferson cited all the blessings enjoyed by his people including having “room enough for our descendants” and “our equal right to the acquisitions of our own industry.”

Yet he asked, “With all these blessings, what more is necessary to make us a happy and a prosperous people? Still one thing more, fellow citizens, a wise and frugal government, which shall restrain men from injuring one another, shall leave them otherwise free to regulate their own pursuits of industry and improvement, and shall not take from the mouth of labor the bread it has earned. This is the sum of good government; and this is necessary to close the circle of our felicities.”

To Jefferson, Americans’ happiness depended on the government protecting their freedom and otherwise leaving them and their prosperity alone. Accordingly, for the first 126 years, America had no income tax. Following the original provisions of the Constitution, federal taxes consisted of property levies, excise taxes and tariffs.

Article I of the Constitution limited federal taxation. It required direct taxes to be distributed proportionally to each state’s population and uniformly across the states.

The uniform clause meant that a majority of states could not vote to heap 100% of the tax burden onto a minority of the states.

The Founders believed that by apportioning taxes equally, taxation would not be used to divide interests. And if every state had the same proportional tax burden, a natural competition would ensue among them to find the most efficient collection methods.

One hundred years ago this month, the Sixteenth Amendment was ratified and removed the requirement for taxes to be appropriated. It reads, “The Congress shall have power to lay and collect taxes on incomes, from whatever source derived, without apportionment among the several states, and without regard to any census or enumeration.”

Nearly everything we associate with social programs and big government depends on this amendment. Many of our early legislators had argued against it for precisely this reason.

The idea of a U.S. income tax began during the Civil War. Congress imposed a 3% tax on incomes over $800 (about $21,000 today) in 1861. Representative James Garfield, who later became president, called a graduated tax unconstitutional. He argued that the poor man has no right to place more of the tax burden on the rich man’s shoulders. The constitution’s uniformity clause was designed to prevent such actions.

Garfield was also concerned that opening the door on a progressive tax system could lead to more discrimination. The progression could continue endlessly with those in the top tax bracket owing close to 100% or even being required to forsake all of their income and then some. What would stop us, if we could already make them pay twice as much per dollar as the rest pay?

In 1894 the Wilson-Gorman Tariff Act instituted a permanent tax of 2% on income over $4,000 (about $50,000 today). The salaries of government officials were exempt.

Sen. David Hill, a Democrat from New York, argued the tax was unconstitutional, undemocratic and unjust. He thought it would permanently violate the rights of the states to raise taxes each in their own way and predicted the inquisitorial features of the law would be abused.

Hill was correct on both accounts. The act was challenged in federal court and found unconstitutional because it was a direct tax that was not apportioned to the states by population.

Republican president Theodore Roosevelt in 1908 proposed using the political power of the government to redistribute wealth. He endorsed both an income tax and an inheritance tax. His successor, Howard Taft, proposed a corporate income tax of 1% on net profits over $5,000. It was justified as a tax on the ability of stockholders to enjoy limited liability.

The Sixteenth Amendment passed Congress. In 1913 two thirds of the states ratified it, thanks to the states in the south and west where individual incomes rarely exceeded $5,000. Its popular support came from the understanding that only the richest 1 in 20 would pay this tax.

Virginia was one of the few southern states to vote against ratification. Richard E. Byrd, Speaker of the House, argued it would be a surrender to imperialism. He believed “a hand from Washington will be stretched out and placed upon every man’s business.” Suddenly money would be unable to change hands without the government having a say.

The income tax was dubbed temporary. But even then many worried it could become a permanent fixture. It was theorized the graduation and exemption of many from the tax would result in less of a check on the extravagances of federal expenditures.

It’s hard to even imagine modern life without the income tax. The burden of taxation influences so many of our actions, especially in terms of our labor.

Politicians argue endlessly about income tax rates, but we rarely hear them talk about whether we should even have such a tax.

In his 2012 presidential campaign, Ron Paul said, “We should have the lowest tax that we’ve ever had, and up until 1913 it was 0%.” He wanted to “shrink the government down to its constitutional size” and “gradually abolish the income tax.”

On Tax Day in 2010, Paul gave a speech that hearkened back to Jefferson. He said, “The role of government is to protect our liberties. . . . Get rid of all these taxes and all these regulations and all these government controls and needless wars. The purpose of liberty is to allow a free people to be creative … and also to strive for excellence and virtue; that’s what life is all about.”

Eliminating the income tax would allow us to keep what we have earned. Our finances would remain private. Once again every dollar of income or expense would be treated equally under the law.