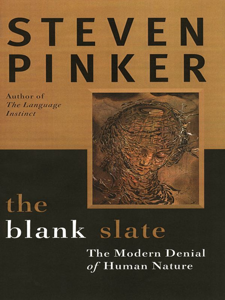 In “Wealth Inequality in America, Part 4” we wrote, “Although it would be wonderful if we lived in a world that lived up to the ideals of the Utopian Vision, we believe along with Stephen Pinker that reality supports the Tragic Vision.”

I highly recommend to those who are trying to understand politics in the United States that they read  chapter16 of Stephen Pinker’s “The Blank Slate.” He is very fair in laying out the two visions, which appear to be tendencies built into the human brain. Here is a section toward the end of the chapter in which Pinker writes:

My own view is that the new sciences of human nature really do vindicate some version of the Tragic Vision and undermine the Utopian outlook that until recently dominated large segments of intellectual life. The sciences say nothing, of course, about differences in values that are associated with particular right-wing and left-wing positions (such as in the tradeoffs between unemployment and environmental protection, diversity and economic efficiency, or individual freedom and community cohesion). Nor do they speak directly to the policies that are based on a complex mixture of assumptions about the world. But they do speak to the parts of the visions that are general claims about how the mind works. Those claims may be evaluated against the facts, just like any empirical hypotheses. The Utopian vision that human nature might radically change in some imagined society of the remote future is, or course, literally unfalsifiable, but I think that many of the discoveries recounted in preceding chapters make it unlikely. Among them I would include the following:

After you have read chapter 16 of “The Blank Slate”, should you desire to explore these two visions of human nature and politics we would recommend reading Thomas Sowell’s “A Conflict of Two Visions.”