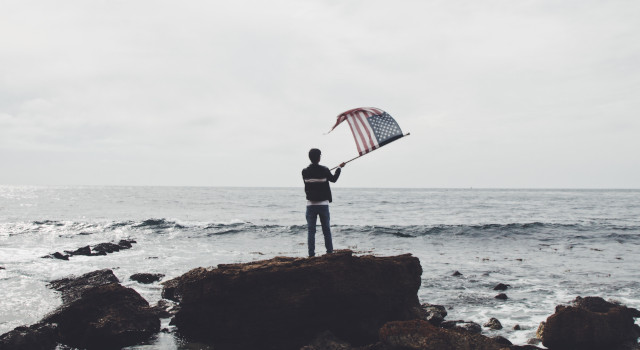 A Richmond investment management company mentioned at a dinner hosted for prospective clients that they were going to be getting out of stocks entirely and going to cash in October in anticipation of the presidential general election. Recommendations to get out of the markets and go to cash are frequently made by investment managers. Every study suggests trying to time jumping out of the markets is a losing venture and yet predictions of dire market crashes perennially attract more media attention than they deserve.

Let me start by suggesting that there is insufficient data to find any trends regarding election years. You should ignore every article that provides a chart detailing what the stock market “does” during an election year. Depending on when you start your data, there have been either 22 or 23 different presidential elections since either 1932 or 1928. If you flipped a coin 22 times the odds of getting exactly 11 heads is just 16.8%. In other words, the odds that a data set of 23 presidential cycles represents the average or typical return is small. Most of the time you will get some random result that will make it look above or below what is truly average or typical.

My purpose in writing this article is to show how most articles which have been written about investing and the U.S. presidential election cycle should be ignored. It is always a good time to have a balanced portfolio. Investors should remain invested all the time, even during an election year.

If you examine the return of the S&P 500 Index for each of the 23 election years since 1928, you’ll see that in only four of them was it negative.

Morgan Stanley advertises a document that suggests stock market returns are better in years in which Republicans are elected. 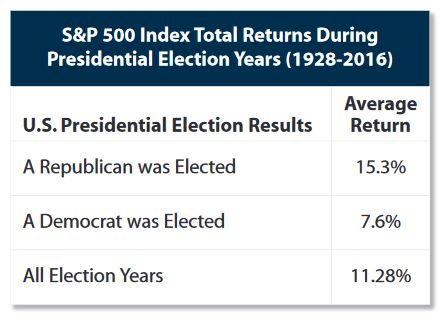 These statistics are skewed by the 2008 election in which the S&P 500 Total Return Index was down -37.0%. Crediting this downturn against Obama being elected hardly seems appropriate when George W. Bush was in office and Obama did not take office until January of 2009. 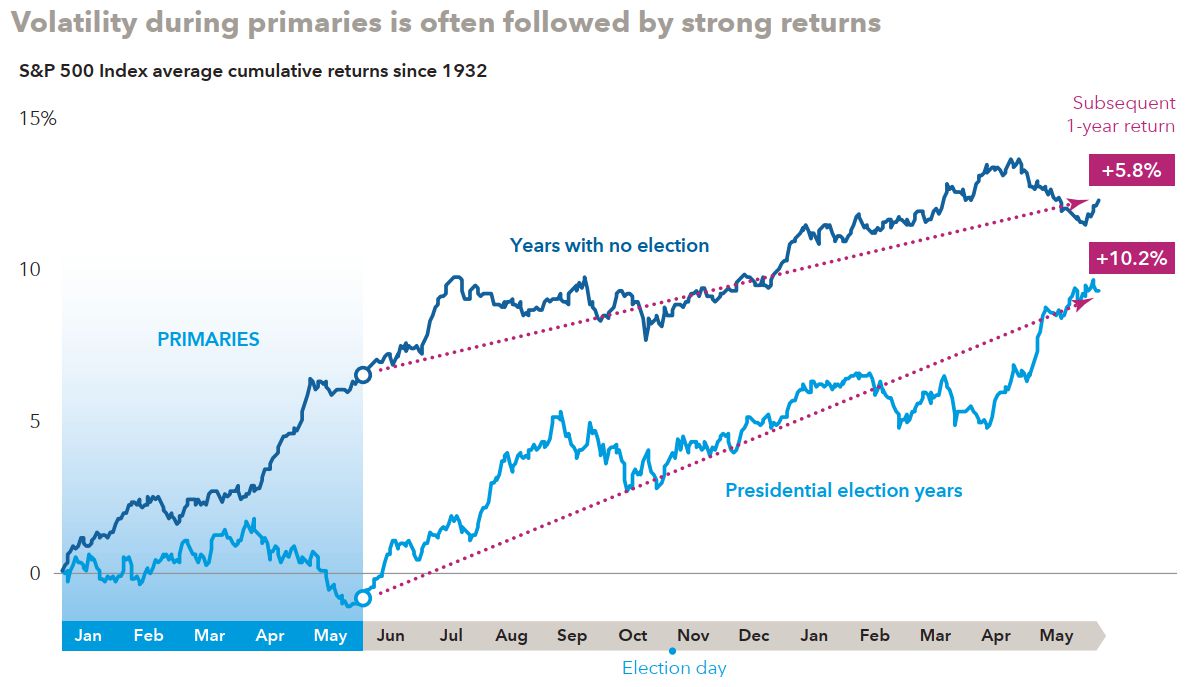 This graph suggests that election years drift sideways during the primary season while presidential contestants are being selected and then catch up for the subsequent year. If you took these statistics to heart, the Richmond investment company’s suggestion to get out of the markets in October would be terrible timing. If anything, this graph would suggest that investment returns after May in an election year will be above average.

Charles Schwab’s Market Commentary from 2016 goes even deeper into the details suggesting that the election year + 3 (i.e. the year before an election year) does the best. Again with such a small sample we believe this level of analysis isn’t warranted as any future indicator. 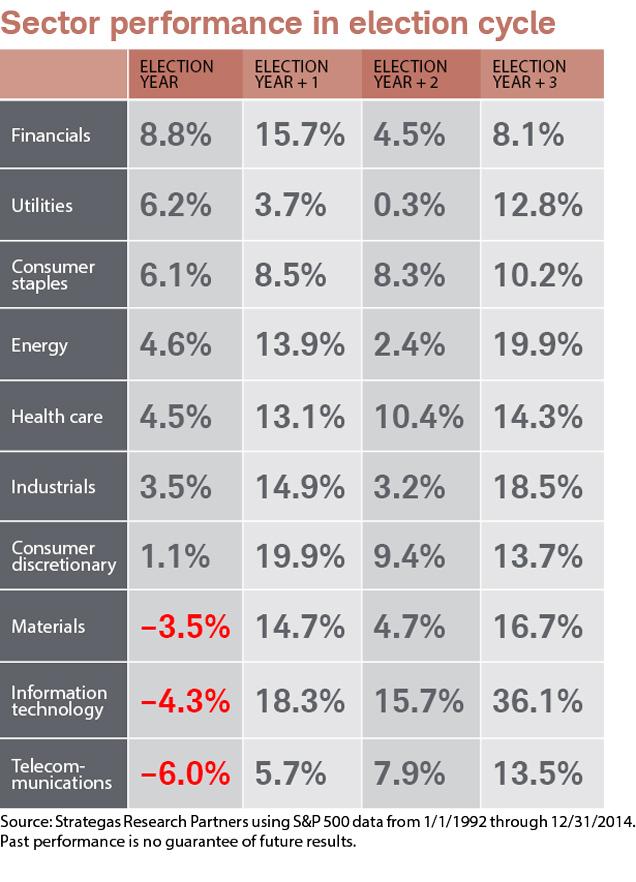 Given this data you would be tempted to invest in Financials during an election year, switch to Consumer Discretionary the next year, and then switch to Information Technology for the last two years. But before you do, bear in mind that this sector data is only from the very short time period of January 1, 1992 through December 31, 2014.

No investment decisions should be made based on only 23 years of data. Such a short time period is not long enough to be statistically significant.

In my earlier article “The Narrative Fallacy,” I tried to explain in just 400 words how and why our brains mislead us. In that article I wrote:

Movements in the stock market, up or down, don’t have a single cause. Market prices are the result of billions of shares of stock being bought or sold. Such volume has millions of causes. And very few of those causes coincide with any given narrative that you might hear through news sources or financial professionals.

Narratives get attention. They fund science studies and attract charitable donations. They fuel political campaigns. They attract attention to financial news. No one would click on the headline, “Stocks went up today and we have no clue why.” And yet headlines like that would be more accurate than most of the popular financial news.

Similarly, we would advise, “It is always a good time to have a balanced portfolio.” And when you aren’t sure what to do, we would recommend, “Rebalance your portfolio toward your target asset allocation.”

Such uninteresting advice will not make the news headlines, but we believe it will result in better long-term portfolio growth.

Photo by Matthew Gonzalez on Unsplash