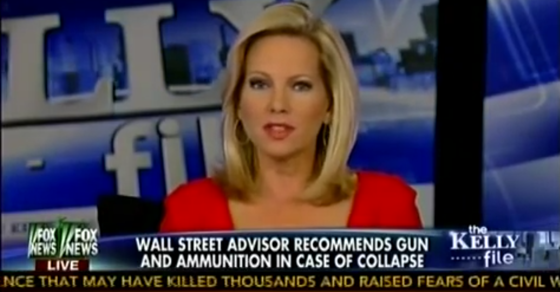 Writing a weekly financial column and daily financial blog, we have used different rubrics to talk about financial preparedness. This year we decided to critique the seven recommendations of one disaster-predicting video via a series of blog posts describing how wealth management would view the suggestions, not knowing one of the blog posts would go viral. Here is our advice about the original list.

1. Don’t buy as much gold as you can get your hands on. Instead, limit your investment in gold and silver to less than 3% of your portfolio.

2. Do get out of debt. This is much better advice if civilization is continuing than if it is collapsing.

3. Don’t get out of paper. Instead, diversify your portfolio across the stocks of many different countries.

4. Don’t hurry to pay off your home mortgage. It would be better to keep a 30-year fixed mortgage at these historically low rates as a hedge against inflation.

5. Do store food, water and, if you want, firearms. Be prepared. Especially because it keeps you from being scared. But firearms are the last item on the list behind two dozen more useful items.

7. Don’t get out of the city. Remain calm and carry on.

Only two of the seven recommendations offered in the video were relatively good advice, although for different reasons than the original intent. Number 2, “Get out of debt,” is always excellent advice. Number 5, “Store food, water and firearms,” is basic emergency advice for at least two of the three items and was the blog post that went viral.

In it, I said preparing a kit for TEOTWAWKI (The End Of The World As We Know It) is also helpful for many lesser emergencies than the end of the world.

Here in Charlottesville we experienced a massive snowstorm that left us without power for three weeks, a micro-burst that laid down all the trees like a bomb had gone off, and an earthquake that devastated homes at the epicenter. Emergency preparedness is always wise. General emergency preparedness is the best we can do and was the focus of the article. Food and water, of course, made the list.

On the topic of guns, I wrote, “Just to be clear. Firearms are the last item on the list, but they are on the list. There are some terrible people in this world. And you are safer when your trusted neighbors have firearms. But in most disasters, including I suspect TEOTWAWKI, most people you meet will be civil.”

I concluded by saying, “Be prepared. Especially because it keeps you from being scared.”

This blog post was published December 11 on our blog and two weeks later on our corporate site. Our corporate e-mail subscriptions were sent on Christmas Eve.

Paul Bedard of the Washington Examiner picked up the story first in his December 26 Washington Secrets column entitled, “Be prepared: Wall Street advisor recommends guns, ammo for protection in collapse.”

Three parts of the headline are misleading. I am not a Wall Street advisor; I am in Charlottesville, Virginia. My only connection to Wall Street is having my photo taken at the Bull and eating at the Deli. The article does mildly clarify, describing me as a “Wall Street expert,” true if that means investment advisor. However, future articles referencing Bedard’s article were misled by this description.

Furthermore, I did not exactly recommend guns and ammo. I suggested that two dozen items on the list are more important. This is mentioned in the article when Bedard quotes me as saying, “Firearms are the last item on the list, but they are on the list.”

I did not suggest there would be a collapse. I had written in the first of the series, “There is the possibility of a precipitous decline, although a long and drawn out malaise is much more likely.”

Bedard was accurate in stating, “Marotta said that many clients fear an end-of-the-world scenario. He doesn’t agree with that outcome, but does with much of what has people worried.”

The very popular Drudge Report picked up the story next and featured it above their banner: “Wall Street advisor recommend guns, ammo for protection in collapse.” The original Washington Examiner article was also copied on multiple sites without comment. Over three days, we had a record 30,946 unique visitors to our two sites.

Once the link was on Drudge, bloggers everywhere began to comment and link to the Washington Examiner article. The photos accompanying their posts varied from a boardroom whose walls were lined with guns to a businessman in a gas mask carrying a briefcase.

My one big tip was described as “Invest in guns–and lots of ammunition.” Another blogger concluded, “Mr. Marotta is right–pack some heat.” Another wrote, “Frankly, the most terrifying thing Marotta says is the acronym TEOTWAWKI (The End Of The World As We Know It). When a top financial advisor starts using TEOTWAWKI in conversation, it’s probably time to start paying attention.”

In addition to learning how a viral story can get many of the facts wrong, another more important lesson can be learned from this experience. The direction of the country has much less support than ever before.

The political right used to default to defending the country whether it was right or wrong. It was the political left who was usually more critical. Now we find little support for government from either persuasion.

At the risk of giving new fodder to the bloggers, it was the lack of support for the late Roman Empire that contributed to its demise. We need to focus on the overlap between the two parties. We should let each group focus privately on their distinctive point of view rather than forcing participation through the force of law.

Moving in a more libertarian direction blends the concerns of the right and the left on the abuses of governmental involvement in everything from marriage to spying. A smaller government could focus on what we all agree is its rightful purpose.