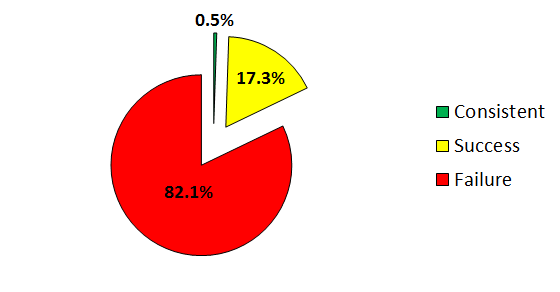 In Investment News’ article Actively managed funds require a steel stomach by Jason Kephart, they chronicle a study by The Vanguard Group of the 1,540 stock funds that existed in 1998 to determine what the odds were of picking a fund which beat the markets over the past 15 years.

First of all, picking a fund that’s going to be around in 15 years is tough.

Picking one that’s going to outperform is even tougher.

Only 275 of the mutual funds that existed in 1998, or 18%, have produced returns greater than their respective benchmarks over the 15-year period ended in 2012, according to a Vanguard study released last week.

Translated, that means that actively managed funds have had an 82% failure rate.

And even the 275 “winners” did not do so consistently:

Investors are usually not willing to allow a fund to have 5 of 15 years underperforming. And yet all but 0.5% of funds underperform at least 5 of the years.

And because investors chase returns rather than staying the course, they even underperform the very funds they are invested in!

The Windsor Fund’s shareholders lost a percentage point of return a year over the last 15 years, though, thanks to not staying the course, or selling when it was down and only buying when it was up.

One of the disciplines necessary to receive a rebalancing bonus is the ability to periodically rebalance your portfolio, taking money out of what has done well and putting it into what has not done as well.