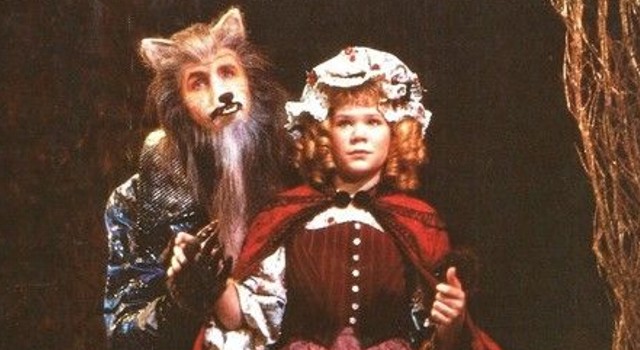 Lesson 2: Nice is different than good.

In our modern version of Cinderella, the Prince is a generic hero who can be admired. He is Prince Charming, after all.

However, in “Into the Woods” Cinderella’s prince is one of the most despicable characters. Alongside Rapunzel’s prince, he sings “Agony” in Act 1 where the two battle for who has more desire for their princesses. They end the song, “I must have her to wife.” Then, in Act 2 after having married their princesses, the two princes reprise Agony. Now both married men, they battle over who has more desire for two random maidens whose characterizations resemble Snow White and Sleeping Beauty. They end their reprise, “Ah, well, back to my wife.”

They are despicable. In case you somehow missed that they are despicable, it is tradition that the same actor who plays Cinderella’s prince also play Red Riding Hood’s wolf. He is a wolf in princes clothes.

In the traditional fairy tale, there are obvious villains and heroes. However, in “Into the Woods” nothing is that clear. One of the last songs in the play is called “Your Fault” in which each so-called hero blames another so-called hero for the terrible Act 2 consequences of their humble Act 1 mistakes.

This is where Little Red Riding Hood’s “I Know Things Now” carries the theme the strongest. Sung right after Red and her grandmother are freed from the wolf, she sings about the experience. She concludes the song with the simple phrase, “Though scary is exciting, nice is different than good.”

This is the lesson we can take with us into our financial decisions.

“Don’t push your sister,” may work in 99% of cases as an interpretation of the golden rule, but when the TV is falling on your sister, the golden rule would have you push her out of the way. In this manner, you can see how a principle-based standard creates better behavior than a rules-based set of regulations.

A fiduciary is “an individual in whom another has placed the utmost trust and confidence to manage and protect property or money. The relationship wherein one person has an obligation to act for another’s benefit.” A fiduciary has a legal obligation to act in a client’s best interests.

The fiduciary standard is good but it is not always nice. In fact, often the fiduciary standard is disagreeable. A parrot, although agreeable, is a bad advisor. The best advisors are people who are usually right and hold strong opinions. After putting in the time and expertise to get the right answer, a fiduciary must be disagreeable and do what is right even if it is not what others want. Fiduciaries must forgo being nice to be good.

We have disagreeableness baked into our Tenets of Customer Service. Accuracy and clarity come before empathy, because our first priority is to clearly tell you what is right. Empathy comes next so that our strong opinions are communicated with tact and heart. However, disagreeableness must come first and be at the core of our standard because what is in our client’s best interests is not always the most agreeable thing to say.

In contrast to this, there are the princes of “Into the Woods.” In Act 2, Cinderella’s prince stumbles upon Cinderella in the woods. She criticizes the type of man that he is. To which, he replies, “I was raised to be charming, not sincere.”

This is the dark side of the financial services industry. They are smooth, successful, and charming. Like the characterization of the 2017 SEC advertisement, they behave like sly princes but, in reality, many are wolves in prince’s clothing. Many professionals, although registered as investment advisors, are still gouging their clients with high fees and expenses.

Most so-called advisors at brokerage firms gain the most revenue from the commissions that they generate in a “eat what you kill” mentality. As former dark-side broker Matt Illian writes:

As you can imagine, it’s very challenging to remember the Golden Rule when both your paycheck and your self-worth is at stake. In the so-called good old days, we didn’t even need to disclose how much we received in commissions. We were trained simply to focus on features and benefits without addressing the costs of these products.

Can you trust your financial advisor? Most people are surprised that our answer is always “No.” Instead of relying on trust, you should safeguard your money and select a fee-only financial planner.

Nice is different from good. You want a good financial planner not just a nice one.

Photo of Robert Westenberg who was both the Wolf and Cinderella’s Prince and Danielle Ferland as Little Red Riding Hood from 1989 original Broadway cast recording of Into the Woods.