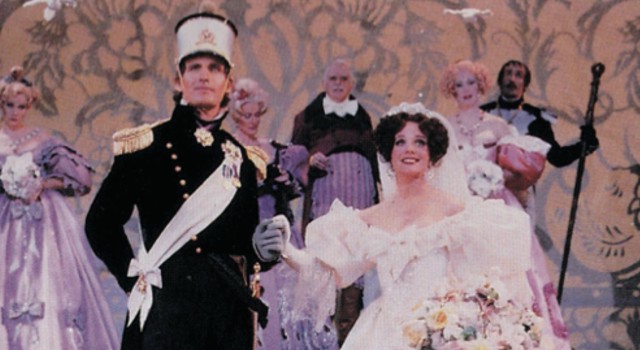 Lesson 1: Do you know what you wish?

After the narrator, the first lines of each major character (Cinderella, then Jack, then the Baker and his wife, eventually Jack’s Mother and Little Red Riding Hood) are “I wish… .” Many of them finish their sentence I wish “more than anything” or “more than life.” Wishing is one of the primary themes of “Into the Woods.” It is so important that the first line of Act I, the first line of Act II, and the last line of the musical are all “I wish.” Furthermore, all three of these opening/closing lines are sung by the same character: Cinderella.

Most characters spend their whole journey into the woods pining after something they don’t have. Then, they spend their journey out of the woods having new, old, or the same desires awakened in them again.

There is an insatiable hunger in this musical: a desire to have what you don’t, a delusion that getting what you quest for will make you happy, and an optimism that you know what you actually want. Alas, most characters do not know what they really want or they want the wanting more than the getting.

But does Cinderella really know what she wishes for? After she goes to the first festival, she meets the Baker’s Wife in the woods. Together they sing the song “A Very Nice Prince” where Cinderella explains her experience at the ball to a very interested Baker’s Wife. The Baker’s Wife (singing the same tune as the Prince’s hilarious yet despicable song “Agony”) asks if the Prince was “sensitive, clever, well-mannered, considerate, passionate, charming, as kind as he’s handsome, as wise as he’s rich. Is he everything you’ve ever wanted?”

Cinderella replies, “Would I know?”

To which the Baker’s Wife quips, “Well, I know.”

Meanwhile, the Baker’s Wife overlaps with “Would I know? … I never wish… just within reason… when you know you can’t have what you want, where’s the profit in wishing?”

After the third and final festival, Cinderella gets her shoe stuck on the stairs and sings in “On the Steps of the Palace” where we hear her decision making process. Should she stay stuck on the steps and let the prince catch her or get away, hide her identity, and perhaps never see him again? She sings, “All right, what do you want? Have to make a decision.” Eventually, as she sings, “You know what your decision is, which is not to decide. You’ll just leave him a clue: for example, a shoe. And then see what he’ll do.”

Cinderella navigates her life filled with the deep desire for more. However, she also makes very few decisions throughout the play. She often leaves the power and control of how her life turns out to others. Her interest in the prince is lukewarm. We never see them nor hear about them being affectionate with one another. At the crucial moment of decision on the steps of the palace, Cinderella decides not to decide. She lets the prince decide whether they should be together.

Later, after Cinderella and her prince have been married, the Baker’s Wife gets to meet the prince in the woods. The prince sings “Any Moment” as he pushes himself onto an undecided Baker’s Wife. After this encounter, the prince runs off with a brief farewell tune and the Baker’s Wife is left alone to finish the song “Moments in the Woods” by herself. After much back and forth of thought, she finally concludes the song with:

Just a moment, one peculiar passing moment…
Must it all be either less or more, either plain or grand? Is it always “or”? Is it never “and”?

That’s what [woods/woulds] are for: for those moments in the woods.
Oh, if life were made of moments, — Even now and then a bad one!
But if life were only moments, then you’d never know you had one.

First a Witch, then a child, then a Prince, then a moment — Who can live in the woods?!
And to get what you wish, Only just for a moment — These are dangerous woods!

Let the moment go… Don’t forget it for a moment, though.
Just remembering you’ve had an “and” when you’re back to “or” makes the “or” mean more than it did before.

Now I understand, and it’s time to leave the woods.

For both Cinderella, who wants to know what she wants but is unwilling to decide, and the Baker’s Wife, who thinks she wants something but refuses to let herself imagine it, they are unable to get what they really want during the play.

To find out what you want, you need to permit yourself the freedom to imagine what you want. Start with imagining anything, no matter how silly. Then ground it in your reality.

The Baker’s Wife thought she wanted a prince, but when she gets into the woods, she starts to realize she just wants to be more involved in the Baker’s life. She sings about the Baker in “It Takes Two” using the same tune as she sings of the prince, “At home, I’d fear we’d stay the same forever, and then out here you’re passionate, charming, considerate, clever…” She wants to be charmed, loved, and cared for. If she had allowed herself to dream beyond the prince, she may have found her way into couples therapy instead.

Cinderella vaguely knows what she wants. After meeting the prince in the woods (not at the festival), she realizes she doesn’t care for him. In her first act of decision, she shoos him away, saying, “I think you should go.”

“Consider I’ve been lost,” Cinderella replies, “A victim of the giant.”

“Is that what you really wish?” the Prince inquires.

Cinderella complains, “My father’s house was a nightmare. Your house was a dream. Now I want something in-between…. Please go!”

The Prince starts to run off, but turns back to say, “I shall always love the maiden who ran away.”

And Cinderella poignantly says, “And I the far-away Prince.”

You get the impression after each night of the festival that Cinderella imagined that what she should want is the prince. When talking to the Baker’s wife about it, she has trouble staying on the topic of the prince. Instead, she is straying to talk about the trumpets, how fun it was to dance, or other matters of the quality of the room. She is a girl who really just wants to be away from her oppressive family and in a place that treats her humanely. If she had pushed herself to make a decision, she may have found her way to independence and gainful employment instead.

Knowing what you want is important to directing the course of your life. Pursuing those desires with intentional decisions then gives you the power over your destiny. You don’t need more money to have a better life. To have a better life, you need to have a purpose for both you and your money.

Although financial planning and budgeting can help you plan for and achieve your goals, you need to have found your goals to budget and plan well. This is life planning. What is the money for? Know the answer and you can live a full, happy life. To know the answer, you need to permit yourself to dream and push yourself to make a decision. Don’t let life make the decisions for you.

Photo of Kim Crosby as Cinderella and Robert Westenberg as Cinderella’s Prince from 1989 original Broadway cast recording of Into the Woods.