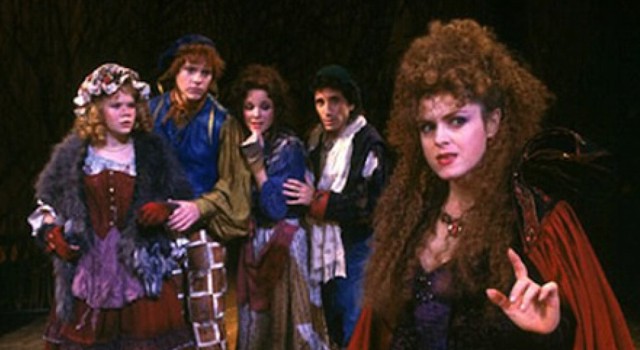 The witch and Rapunzel have a strained relationship. The witch really wants to protect Rapunzel from the dangers in the world, so she has decided to lock Rapunzel in a tower until Rapunzel is savvy enough that she can navigate the dangers of the world. The problem is that Rapunzel is a naive young adult who has never experienced anything. Thus, all the witch’s lessons about the dangers of the woods are only theoretical. When a danger finally comes (the prince), she is inexperienced and unable to defend herself.

When the witch finds Rapunzel pregnant in her tower, she screams and cries the song “Stay with Me.” She bellows, “What did I clearly say? Children must listen. What were you not to do? Children must see and learn. Why could you not obey? Children should listen.”

However, the witch still has more to learn about parenthood. At the very end of the play, most of the cast is on stage for the final song. In it, the Baker, frazzled and unsure about how to parent his child, begins to tell the story of what happened to the child — “Once upon a time, in a far off kingdom…” — while the witch sings over top of him:

The witch’s journey is one that many parents take, although hopefully most of us parents have less tragedy. Children are notorious for pushing limits so they can learn the boundary lines.

On the face of it, it could appear like I should sing the witch’s lament, “No matter what you say, children won’t listen.” However, my daughter was listening and learning. After a week or so of feeling out where the boundary line was, she knew how to acceptably sit at the dinner table and how much of a lean was, although perhaps poor manners, still safe. She was learning the whole time.

Childhood is a time of acquiring lots of behavior that will be useful for the rest of life. Luckily for children, there are many ways to learn it. Unfortunately for parents, your own words, actions, and counsel will be one of the main guiding lights. Children do learn by listening, but they also learn a lot by watching and perhaps even more if they are permitted to practice themselves.

The witch learns the hard way what the cost of keeping your child locked up and ignorant is. Instead of locking your child up in a tower away from difficult lessons like finances, extend to your child the freedom they deserve to explore the world. They will make mistakes, but those are valuable lessons.

Your child may be in the thick of feeling out a boundary line by testing all your limits, but it pays off to be patient and trust that they will learn and they will listen. Trusting that your child will grow up alright is a great gift to your child. It removes from them the pressure and weight of your natural parental fears. It allows them to leave the tower and learn about the world before it is too late.

Photo from 1989 original Broadway cast recording of Into the Woods where Bernadette Peters was the Witch.