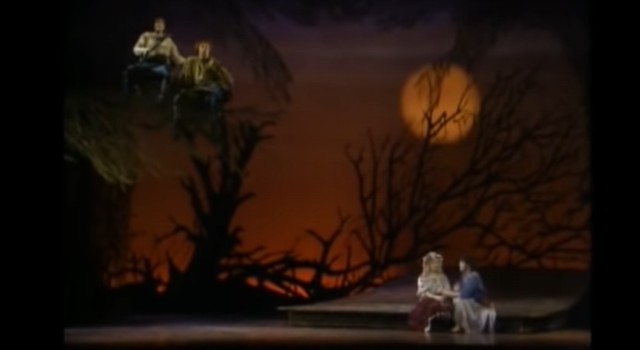 Near the end of the play, both Jack and Red Riding Hood mourn the loss of their mothers. Jack is consoled by the Baker while Red Riding Hood is consoled by Cinderella. Though separated, both the Baker and Cinderella sing the song “You are not alone” together. This song is often seen as one of the thesis statements of the play, and it is filled with interesting moral claims and complexities.

Cinderella starts the song. Red Riding Hood doesn’t know what to do now. She wishes her mom were there to tell her what to do. Cinderella consoles her with:

Mother cannot guide you. Now, you’re on your own. Only me beside you. Still, you’re not alone. No one is alone. Truly, no one is alone. Sometimes people leave you halfway through the wood. Others may deceive you. You decide whats good. You decide alone, but no one is alone. Mother isn’t here now. Who knows what she’d say? Nothings quite so clear now. Feel you’ve lost your way?

The, Baker overlaps this last sentence. Jack has contemplated killing his mother’s murderer and the Baker is advising him not to. The baker sings, “Wrong things, right things. Who can say what’s true? Do things, fight things. You decide, but…”

You move just a finger, say the slightest word. Something’s bound to linger, be heard. No one acts alone. Careful, no one is alone.

Our side– Someone else is not.

While we’re seeing our side, maybe we forgot: they are not alone. No one is alone.
Hard to see the light now. Just don’t let it go. Things will come out right now. We can make it so.

Someone is on your side. No one is alone.

Their song is interrupted right at the end by the quakes of the Giant’s footsteps. Cinderella and Red Riding Hood give up Jack’s location to the Giant. A battle between Jack and the Giant ensues. Then, Jack slays the Giant, the last action a character takes in the play.

“You are not alone” is a song about choices and consequences. Although you are the ultimate authority on what you do with your life, your actions will have consequences on yourself and others. No one acts alone. Careful, no one is alone.

I see financial lessons in this.

Your financial decisions today will change the course of your life, the lives of those you support, and the lives of future generations. Our very definition of financial planning is the small changes that have large effects over long periods of time.

Prioritize saving today and stop borrowing from your future self. You deserve better than that. Each day you fail to save is another day where you tighten the ball and chain around your ankle and promise to be a slave to your job for another year and another year after that. Retirement is about financial freedom — including the freedom to have any job you want. Hard work today is the best gift you can give to your future self.

It is like what the witch sings in her final solo during the grand finale:

Careful the spell you cast, not just on children. Sometimes a spell may last past what you can see and turn against you. Careful the tale you tell, that is the spell. Children will listen.

Your choices now change the course of your future in significant ways. You and those around you will feel the resulting ramifications for good or for ill. “Into the Woods” is a cautionary reminder of that.

Photo of the scene “You are Not Alone” from 1989 original Broadway cast recording of Into the Woods.