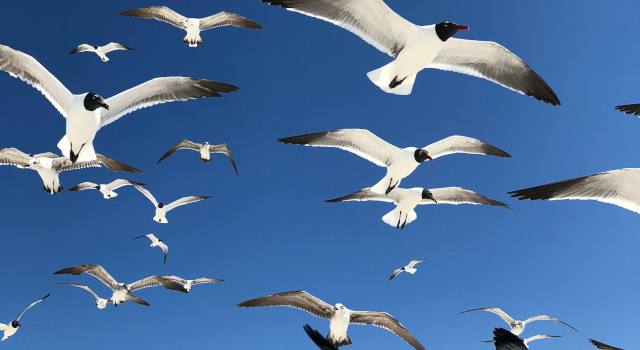 We often think of the stock market as moving mostly in sync either up or down, but the volatile conditions of 2020 remind us that the stock market is better thought of as a market of individual stocks.

Year to date in 2020, individual sectors of the economy and sometimes even individual companies have reacted very differently to the trying times. Some companies or sectors have thrived while others have been shut down completely.

J.P. Morgan’s Guide to the Markets added a slide this quarter which shows the S&P 500 performance by sector of the economy. 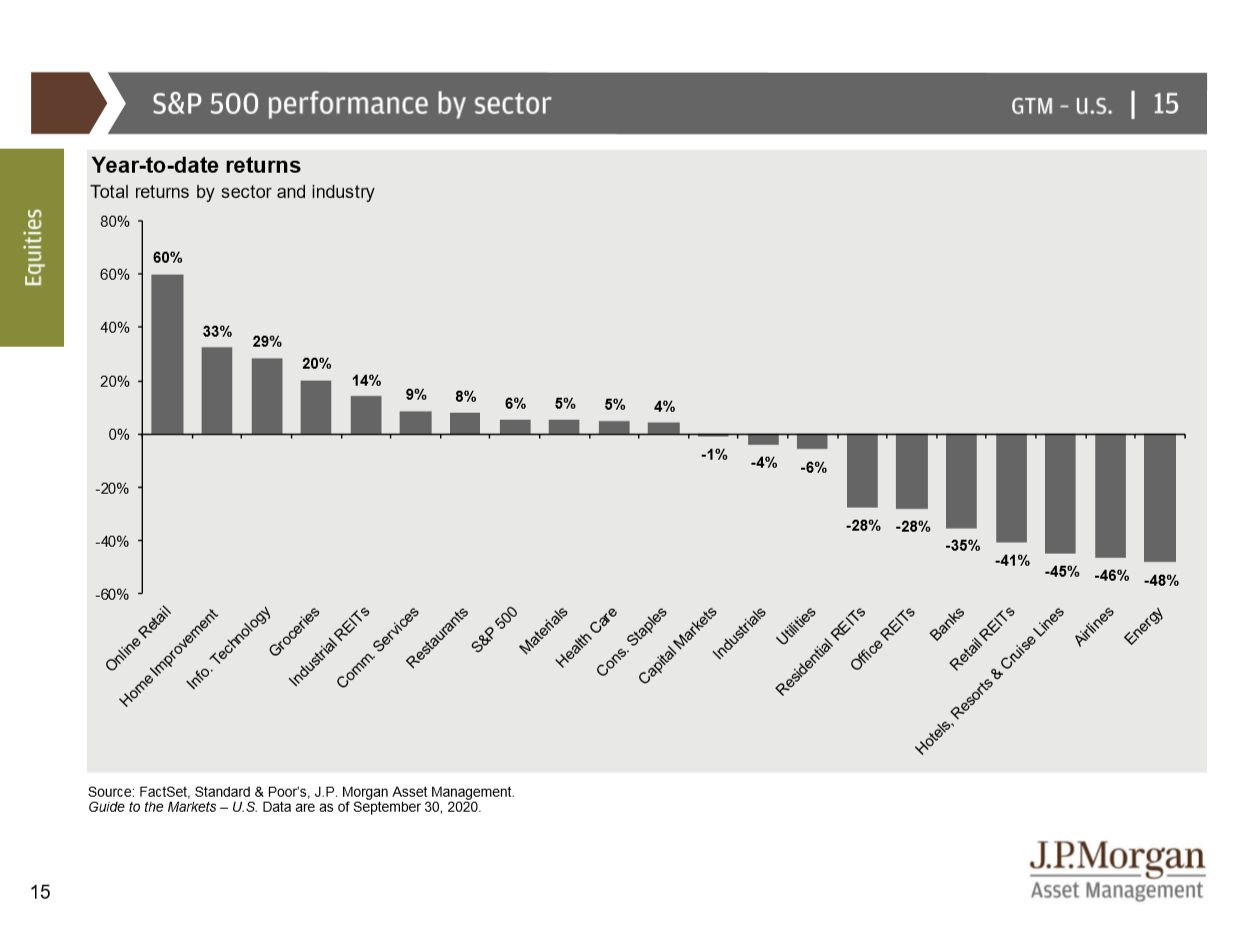 This chart was added to show the divergence in returns between the various sectors of the economy. Some industries have been shut down entirely while others are thriving.

Here’s a brief overview of some of the more interesting sectors from 2020 so far. All returns given are year to date (YTD) returns through the end of the third quarter, meaning from December 31, 2019 through September 30, 2020.

The Consumer Discretionary sector represents those industries that are considered non-essential and therefore most sensitive to economic cycles. It includes about 30% Internet and direct retail and 11% home improvement. Although it also includes restaurants, hotels, resorts, and cruise lines, these sub-sectors represent a little over 12% of the index.

As many Americans find themselves running offices, schools, gyms, and entertainment centers out of the home, they have been finding that their home is not adequate. Thus, home improvement has done very well. Home Depot (HD) is up 29.46% and Lowe’s (LOW) is up 40.46%.

These three stocks (AMZN, HD, and TSLA) are the top three holdings in Vanguard Consumer Discretionary ETF (VCR), which is up 26.51%.

The Information Technology sector represents hardware, systems software, semiconductors, services, and applications. The remote work and life we are all asked to live these days to social distance requires the technology to make it work. As such, the Technology sector has done well.

Apple (APPL) is up 58.84%. I finally traded in my flip phone for an iPhone earlier this year. The next day I read an article that Warren Buffet finally purchased an iPhone. I felt in good company, although Buffet owns about 5.5% of Apple.

Microsoft (MSFT) is up 24.43%. In addition to making Windows, they also make Microsoft Office. They are ubiquitous, and companies like us rely on their productivity software to analyze and compute a host of different problems.

These three stocks (APPL, MSFT, and V) are the top three holdings in Vanguard Information Technology ETF (VGT) which is up 28.28%.

Health Care has an inelastic demand curve and does well in all markets. Biotechnology represents about 20% of the index. Biotech is one of the most interesting sectors where most of the companies represent start up companies which are working on new drugs and burning through their start up capital. Their hope is to develop a new pharmaceutical and be bought by a larger company before their venture capital runs out.

The health care sector is considered defensive, meaning it tends to do well in down markets as well as up markets. While you might think that a pandemic is good for business, the Health Care sector has seen mixed returns.

These three stocks (JNJ, UNH, and MRK) are the top three holdings in Vanguard Health Care ETF (VHT) which is up 7.44%.

Consumer staples is defined as companies that offer products that people are unable or unwilling to cut out of their budgets regardless of their financial situation. Examples of consumer staples are food, beverages, household goods, hygiene products, alcohol, and tobacco. Also included in the category are companies which primarily deal in consumer staples such as food distributors, distillers, vintners, drug retail, food retail, hypermarkets, and super centers.

Even during the pandemic, much of consumer staples continues to do well with groceries and cleaning supplies performing the best. Kroger (KR) is up 18.82% and Clorox (CLX) is up 39.23%.

These three stocks (PG, KO, and WMT) are the top three holdings in Vanguard Consumer Staples ETF (VDC) which is up 3.29%.

The Financials sector represents banks, exchanges, custodians, insurance, and mortgages. Financials have not been doing well. Lower interest rates and lack of business activity have reduced their profits.

These three stocks (JPM, BRK-B, and BAC) are the top three holdings in Vanguard Financials ETF (VFH) which is down -21.82%.

Energy stocks have not been doing well since 2015, but recently they have particularly been doing poorly. Energy is mostly integrated oil and gas. Energy stocks will recover, but that recovery isn’t expected in the next year or two.

These three stocks (XOM, CVX, and COP) are the top three holdings in Vanguard Energy ETF (VDE) which is down -48.52%.

The pandemic has caused unique strains on certain sectors of the US economy while other sectors have experience a boom in their services. The market has adjusted stock prices to reflect these realities and their near term affects.

Currently, the markets have priced according to the likelihood and timing of getting back to normal. Some believe in a quick recovery with a vaccine later this year while others guess that the virus will still interrupt normalcy two years from now.

Photo by ryan skjervem on Unsplash