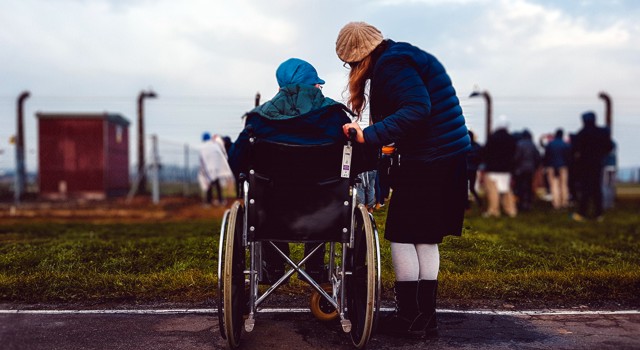 We’ve been waiting to see what our congressmen and women are going to decide for our 2018 tax law. As we’ve already entered the holiday season and can see the new year in sight, they are certainly cutting it close.

This so-called tax reform has a lot of unfavorable proposals. There are many differences between the House and Senate bills, but so far the two bills agree on repealing the state and local tax deduction, lowering the corporate tax rate, repealing Roth recharacterizations, and expanding 529 account usage. Many other details have not been settled between the House and the Senate.

The main proposal of the tax reform however is to redo the income tax brackets, double the standard deduction, eliminate exemptions.

There is no bold proposal here, say a change from an income tax to a sales tax or a flat tax. For all the changes being made, the Republicans missed an opportunity to scrap the tax code, start from scratch, and adopt a tax code that looks like someone designed it on purpose.

This proposal does not substantially change our tax code. The proposal changes the starting points of various brackets and the value of various reductions. The code will continue to be economically destructive and the effects of that progressive tax will continue to trickle down to everyone in our society.

Using 2016 (so you can use your finished tax return) as the comparison, here is the Senate’s proposal shown graphically for married filing jointly: 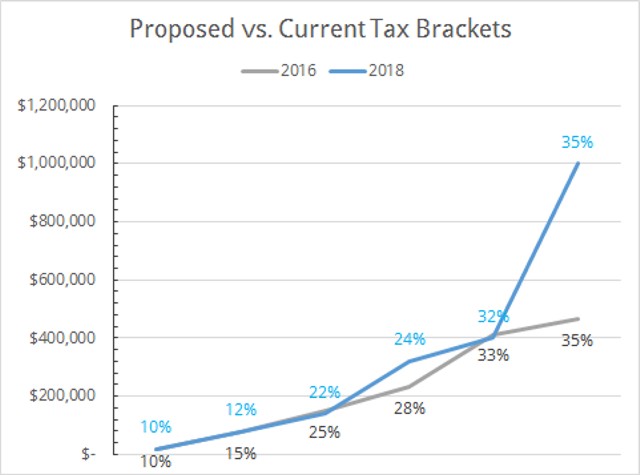 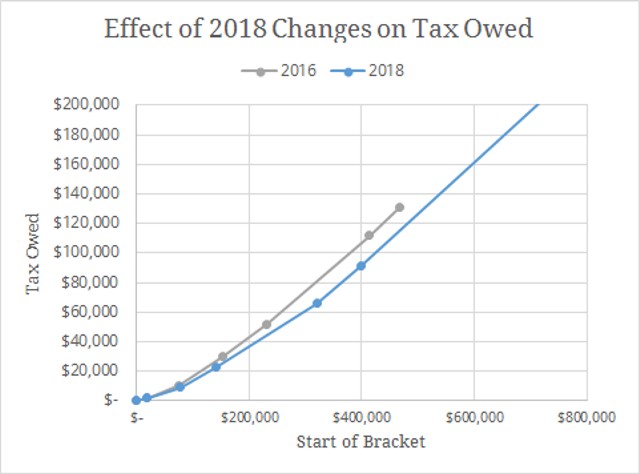 You can see from the graphs that because of the snowball effect, the cumulative tax cut received grows larger as taxable income rises above $200,000.

However, because of the changes to itemized deductions, many actual families might see an increase in or at least similar amount of tax owed even though there is this presumed tax cut on paper.

In 2018, it looks like itemized deductions will be limited to medical bills and charitable giving.

For the wealthy, it was not uncommon for itemized deductions to reach $30,000 or more with state taxes and mortgage interest being the tipping point to itemize. For a wealthy married couple, the proposed 2018 changes could cause a $14,100 or more increase in taxable income due.

Under the 2018 proposal, it will really only be the very sick or very generous who itemize.

With the new standard deduction, someone giving 10% per year would need an AGI over $240,000 for it to be worth itemizing. That is if you keep giving annually. If you stack your giving up into one year, less giving can still provide tax savings.

For example, instead of giving say $6,000 every year, you could give $30,000 to a donor-advised fund (DAF) every five years. In that one year of giving, you would get an extra $6,000 deduction from itemizing and save on your taxes. Then, you can gift out of your DAF on the other four years as you wait to save up enough to give again.

You could also do this in the years leading up to retirement: “over-give” to your DAF each year until you retire to save on taxes and then give out of your DAF while your income is low in retirement.

To the extent that you control your medical bills, you can implement the same strategy, scheduling the procedures you can during your itemizing years.

If that strategy does not work for you and you are taking RMDs, then qualified charitable distributions (QCDs) might be worth looking into. A QCD reduces your AGI since the gift comes out of your IRA but the withdrawal is not added to your AGI. It reduces your taxable income even if you don’t itemize and still allows you to take the standard deductions.

We will have to wait and see what tax law we have after Congress reconciles the bills and the final version is signed into law by the President.

Photo by Josh Appel on Unsplash