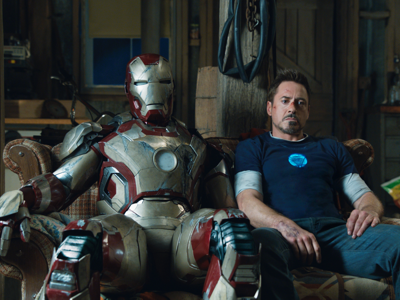 Tony Stark, more commonly known as Iron Man, is one of the most famous comic book CEOs. He is described by Marvel Comics as a “self-made superhero” who inherited the role of CEO at Stark Enterprises. He owns billions and is a genius electrical engineering and physics Ph.D. but is “more interested in living a reckless playboy lifestyle than using his engineering skills.”

The character’s rise to fame in the public eye has been via the Iron Man trilogy and in the Avengers movies as played by Robert Downey Jr.

Isaac Perlmutter is Tony Stark’s CEO. He bought formerly bankrupt Marvel Entertainment in 1998, became CEO in 2005 and facilitated the 2009 sale to Disney, remaining CEO of the company to this day. The Forbes billionaire list calls him a “reclusive billionaire CEO.”

Unlike Tony Stark, who is one of the richest men in the Marvel Universe, Isaac Perlmutter ranks number 613 in the billionaire list with only $2.4 billion. Unlike Isaac Perlmutter, Tony Stark is admired by his fictional and real fans alike.

Eric Edson’s “The Story Solution” is famous for creating the “23 Steps All Great Heroes Must Take,” a powerful writing tool for understanding how to make your main character worthy of your readers’ affection, even if, like Tony Stark, he is a bit of a despicable playboy.

In his book, Edson introduces a list of nine possible hero attributes and suggests all great heroes must have at least five for readers or the audience to like them. The list is (1) loved by friends and family, (2) just plain nice, (3) courage, (4) skill, (5) funny, (6) in danger, (7) unfair injury, (8) obsessed, and (9) hard working.

Fictional Tony Stark is clearly “funny.” His sarcasm colors most of the comic panels or movie scenes he’s in. He is frequently “in danger” as the victim or a thinly spread hero. He’s suffered an “unfair injury,” getting a horrible chest injury from his terrorist captors that would have killed him if his smarts and ingenuity hadn’t invented his Iron Man suit.

He is “obsessive,” frequently shown working all night long despite the advice of his friends to slow down, and he has “skill,” able to perform what appears magical with engineering. Furthermore, he has “courage,” flying into the face of danger with what seems like half-baked plans and no fear.

He is not “loved by his friends and family.” In fact, ticked off, upset or disgruntled loved ones are the most common theme of Iron Man’s story. He’s always hurting or disappointing the people he loves. He’s not “just plain nice”; he speaks with biting sarcasm, offending most people he interacts with.

And lastly, he’s not “hard working.” In fact, he dodges real work whenever he can. In the first Iron Man movie, when Tony Stark misses his own awards banquet, Obadiah Stone accepts Tony’s Apogee Award apologetically saying, “He’s always working.” But we know better. The scene quickly cuts to Tony Stark playing craps in a casino.

Tony has six of the nine attributes. He’s a “great hero” and we love him for it.

The real CEO Isaac Perlmutter is a different story. The most common phrase to characterize him is “reclusive” or “private.” The most common knowledge about Perlmutter is that he prides himself on never having given an interview, not even once over his entire three decades of spotlight careers, messy bankruptcies and legal battles.

Furthermore, in the words of Deadline Hollywood’s Nikki Finke, Perlmutter “gives new meaning to the term stingy.” He is a famous penny-pincher and reportedly scrutinizes every expense of the multibillion dollar company from toilet paper to paper clips.

He was an Israeli immigrant, coming to America in 1967 after serving in the Israeli army. He reportedly stepped onto U.S. soil with only $250 in his pocket. As a result, he is the definition of self-made. With no formal higher education of any kind, Perlmutter worked his way up in the business world from reselling goods to dollar stores to owning his own toy company (ToyBiz) to serving as the CEO of Marvel Entertainment.

His journey from rags to riches, from informal education to educating a company, suggests that Perlmutter is hard working and likely has a lot of courage, but sadly for his “great hero” status, the list stops there.

His lack of interviews suggest he is not “just plain nice.” We don’t know anything about his friends and family. He obviously has some skill to accomplish his job, but we’re not privy to what it is, and we’re not inclined to credit him with the skill of penny-pinching, although that likely earns him the description “obsessive.”

He hasn’t had an unfair injury or been in danger in any way we’ve known about. And he’s not that funny since he hasn’t even spoken to the public.

As a result, real-life CEO Isaac Perlmutter walks away with three of the nine attributes, two short of being a “great hero.” Most real-life CEOs are similarly unsympathetic. They strive to be that way. The drama that makes a great story often makes a poor CEO.

A study by Dean Stamoulis and Erika Mannion found that of 60 common attributes used to assess leaders, CEOs differ from other executives in nine of them. Their study suggests that although CEOs possess a broad range of capabilities, more importantly they know when to flex. They are strategic yet tactical. They are tough yet emotionally sensitive. And they are decisive yet inclusive.

In other words, they are able to become what the organization needs. They recognize that the story isn’t all about them. They have moved beyond being the hero. Good CEOs aren’t trying to gain sympathy for themselves. They are trying to build consensus and gain support for the mission of their organizations.

CEOs don’t need to be flashy legends to create a great company.