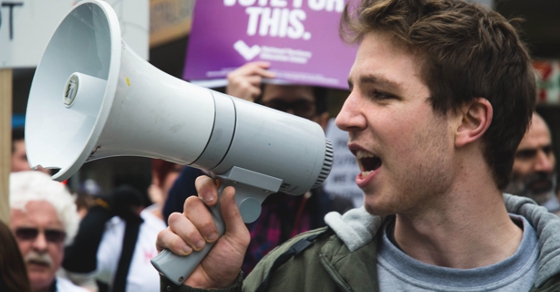 Real estate taxes can are sometimes seen as a tool to strike down the wealthy landowners that demonize defenseless renters. However, on second thought, liberals should be the first to shout for the abolition of real estate taxes in every county and city across the country for three reasons.

“Slum lords” and other landowners – the most common villains in any story defending real estate taxes – are not hurt by these taxes. The costs of business are passed along to the consumer and become part of the price. Being a landlord is a business just like any other.

For the business to make a profit, rent payments have to cover all expenses – including taxes – in order to show a profit. Raise real estate taxes and you raise the cost of every person who needs a place to live. Raise taxes too much, there’s no profit in the business, and it becomes impossible for some landlords to hold on to their property.

But what’s so bad about that? It would force some people to sell and allow liberal folks to buy property and do with it whatever their consciences tell them. That sounds like a win for liberals. That is, until you realize the cost of owning real estate.

2. Some Dreams Become Near Impossible

Buying land or a house is not like buying any other piece of property. With anything else, you save up some money, pay for it once, and you’re done. You get to keep it forever, until it falls apart or you feel like selling it. With real estate, you save up a lot money, probably borrow a lot more, pay for it, pay to keep it up, and pay again every year to keep it.

Because there is a constant expense to owning real estate, you have to start thinking like a business. You have to figure out how to make enough money every year to keep your land. The easiest way is to try and get your land to pay for itself, which is why so many people who own real estate in addition to their residence become landlords. That is, to keep your land, you have to commercialize it.

Imagine your dream is conserving nature as it is. You save up enough money to buy, say, 20 acres of forest. But now, you have to work so much every year to maintain it that you’ll never be able to appreciate it. Of course, you could try to farm it without damaging the wilderness too much, but that’s hard work, not too profitable, and doesn’t quite fit your dream. Or you could give control over it to the government in exchange for tax credits, but then again, your standards of conservation and the government’s may differ significantly. Again, you are not free to live your dream. Real estate taxes make it impossible for private citizens without fabulous wealth to conserve wilderness according to their consciences. Lots of people care about sustainability, and without real estate taxes, they might save up enough to be able to personally protect a part of the world.

3. You Could Lose Your House

Real estate taxes are one of the few taxes that can actually drive you bankrupt. Income taxes only take a portion of the new money you make. Sales taxes are unavoidable, except that you are given the choice of whether to purchase the taxed good in the first place (that is, until the precedent set by the ACA that the government can require you to purchase a good gets extended to taxable goods). But real estate taxes punish you for making the same purchase, year after year, after you’ve already paid a price in the hundreds of thousands of dollars for that good. If your income drops unexpectedly and making payments becomes difficult, then it’s goodbye land. That’s just adding insult to injury.

But of course, that’s not the only thing that can raise the effective cost of owning property. The government could always just raise real estate tax rates. They’re particularly fond of doing that. Or, they could instead simply increase the assessed value of your home. Assessments frequently increase through no fault of your own, either because some new shopping mall is coming in to town or your neighbors sold their similar houses at a great price. For that, you get taxed more. That is ludicrous.

These are all somewhat abstract reasons to object, so let me ground this discussion a bit.

I have another pair of close acquaintances whose favorite place in the world is a little spot in the wilderness. It’s been in their family for generations. The catch? It’s technically on government land and the government has just decided they want everybody off. So the government decided to raise taxes. It’s no more than 2 acres of land, pre-dates electricity and indoor plumbing, and is so far off the beaten path that it is near impossible to find once the sun goes down. And yet, it costs $15,000 every year to keep it. They’re retired. They had to start looking for someone else to buy their favorite place in the world.

The reasons to oppose real estate taxes are many.

There are pragmatic ones: they raise the cost of living for everybody whether you own or rent, because you’ve got to have somewhere to live.

There are idealistic reasons: they prevent people from living their dreams, most especially those who want to enjoy and protect their land more than they want it to be productive.

There are moral ones: real estate taxes tax an essential good – a place to live – in the harshest manner possible, such that simply living in your house can drive you bankrupt.

But finally, there are personal reasons: Taxes hurt ordinary folks before the extraordinary ones, and it can hurt them badly.

So there you have it, liberals. What are you going to do about it?