The economic freedom raw data from the Heritage Foundation included the following three statistics for each country:

From these I computed a country’s deficit (4) as a percentage of GDP by taking the Tax Burden (1) minus the Government Expenditure (2). There are subtler ways of evaluating debt and deficit as some countries have rainy-day funds while other just use a rainy day as an excuse toward even more wanton spending.

Then I plotted each country’s debt (3) and deficit (4) on the following chart: 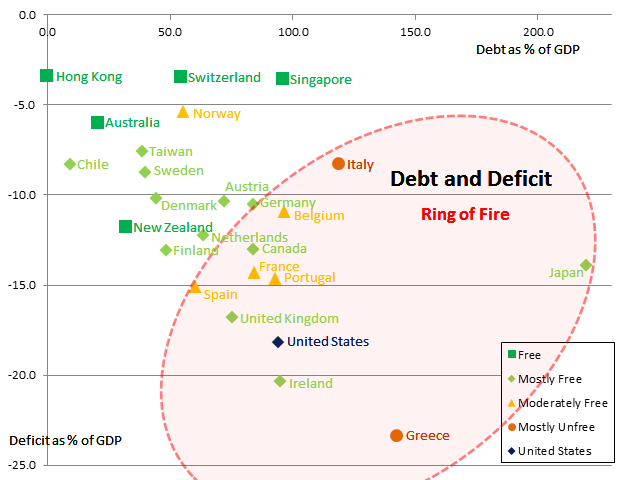 In March 2010 Bill Grosses drew a similar chart in his newsletter in which he circled the “Ring of Fire” countries to be worried about. We warned to avoid these “ring of fire” countries. And a year later revisited that advice confirming that investors should continue to avoid the “ring of fire.” Now almost a second year later we reiterate that sovereign debt and deficit produces a drag on a country’s economic prospects. Low debt and deficit continues to be one of the important components of economic freedom.

Most investors have heard of the BRIC emerging market countries (Brazil, Russia, India, China). What is important in the Ring of Fire are the PIIGS (Portugal, Ireland, Italy, Greece and Spain) pulling down the European Union. Add to these countries Japan, The United States, and the United Kingdom.

Sovereign debt and deficit weigh most heavily on a country’s level of government spending, one of the ten components of freedom in the Heritage Foundation economic freedom study. Here is a graph showing the freedom scores for government spending in Europe. 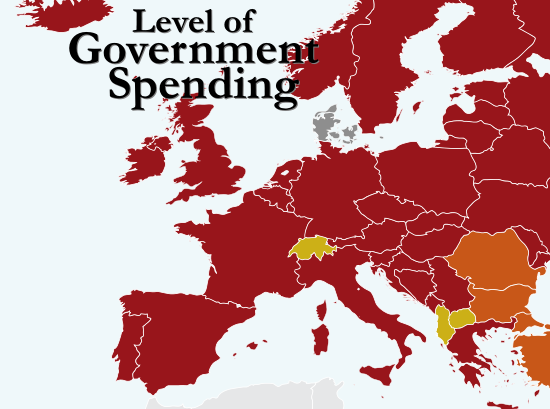 There are probably multiple reasons why high economic freedom is important to the investment returns of companies in a country, but sovereign debt and deficit is certainly one of them.

Disclosures: Our firm has been over weighting countries with the most economic freedom for several years. New subscribers to our blog receive free access to a 1.75 hour video presentation on “Where in the World to Invest?“