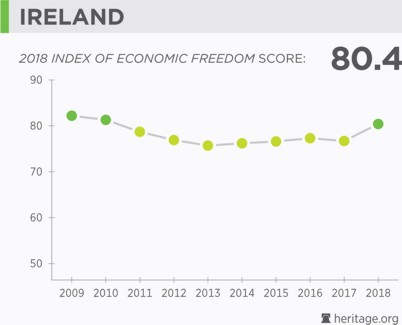 The term PIIGS is an ancronym made popular during the European debt crisis of 2008 and 2009. It stood for the five countries that had high debt and deficit and poor prospects of repaying their loans. These financially weak countries were Portugal, Ireland, Italy, Greece, and Spain.

More recently Ireland has proved that a country can significantly decrease its debt and escape the deficit spending of the ring of fire of countries.

While Irish government debt to GDP rose to over 100 percent, it has since fallen back to just 68 percent last year. As the 2018 Index of Economic Freedom reports about Ireland:

Even U2 singer Bono defended the free capitalism and commerce of Ireland in 2014, as The Guardian reports:

In an interview with the Observer, …Bono said: “We are a tiny little country, we don’t have scale, and our version of scale is to be innovative and to be clever, and tax competitiveness has brought our country the only prosperity we’ve known. That’s how we got these companies here … We don’t have natural resources, we have to be able to attract people.”

Ireland is facing strong pressure from Brussels to increase its corporate tax rate so that Ireland’s low corporate rates don’t compete with the rest of the European Union. We hope for the sake of the Irish economy and Irish economic freedom that Irish tax rates remain low. Punitive tax rates are recognized to be economically destructive by economists, not just famous singers.

In recognition of its efforts to reduce its debt and deficit and Ireland’s return to the “free” category of the economic freedom index, I think the letter I for Ireland should be removed from PIIGS and it should return once more to just PIGS.