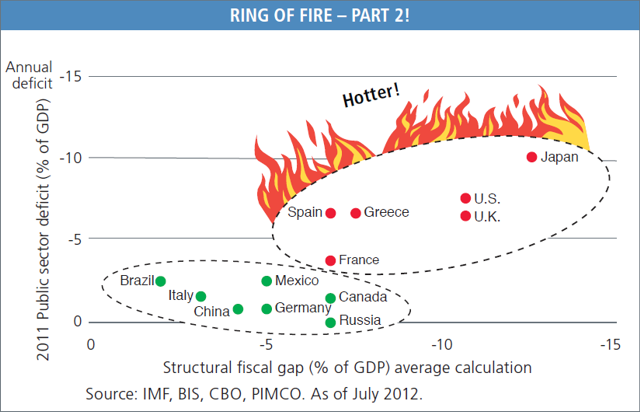 In May of 2010 I called attention to the newsletter in which Bill Gross evaluated countries based on their total public sector debt as a percentage of gross domestic product (GDP) as well as their annual deficit, which is making matters worse. Gross singled out those countries heaping significant deficits on their mountain of debt and called them “The Ring of Fire.” In that post we recommended that you:

Just over a year ago  in June of 2011 later we revisited the issue and recommended that you “Continue to Avoid the ‘Ring of Fire’ Countries“.

Since then we have continued to track Sovereign Debt and Deficit by Country and to review how freedom investing has fared. We believe this is one of the times when your asset allocation should tilt foreign and overweight the handful of countries with high economic freedom. Although many economists acknowledge that freedom matters, few investment strategies take advantage of this fact.

Now in October of 2012 the latest newsletter from Bill Gross he has updated the ring of fire. And in his executive summary writes:

Unless we begin to close this gap, then the inevitable result will be that our debt/GDP ratio will continue to rise, the Fed would print money to pay for the deficiency, inflation would follow, and the dollar would inevitably decline.

Resource stocks, emerging markets and countries high in economic freedom but low in debt and deficit help as part of a diversified portfolio that includes asset classes favored if there is inflation or a decline in the dollar.