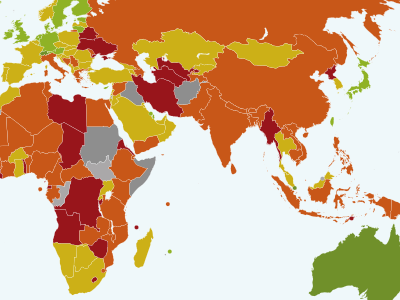 I’ve been discussing foreign freedom investing for a decade now. In the spring of 2010, I used the term “Ring-of-Fire” to describe countries with a high debt and deficit and suggested avoiding them. A year later, I revisited that advice and counseled investors to continue tilting toward specific countries. Now at year end, I will review how freedom investing fared in 2011 and in the decade since 2002.

The Heritage Foundation has released its 2012 Index of Economic Freedom. Since 1994, the Heritage Foundation Index of Economic Freedom has used a systematic empirical measurement of economic freedom to evaluate countries worldwide. The index clearly shows that economic freedom and higher rates of long-term economic growth go together. Investors can use the study to select countries for their foreign stock allocation.

This year’s changes were discouraging. Paul A. Gigot, the Wall Street Journal editorial page editor, wrote in the foreword to this year’s report, “The financial panic and Great Recession have sent the march of freedom in reverse, and the policy responses to both events have done little to arrest the retreat.” If all that Keynesian spending really did any good, you would expect countries that increased government spending to have better returns as a result. But they did not. 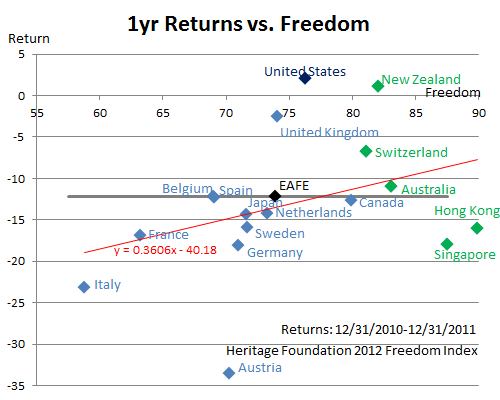 I took 14 of the developed countries with the largest investable markets and compared their current economic freedom score with their returns over the past 1, 3, 5 and 10 years. Only five of these countries are ranked in the free category: Hong Kong, Singapore, Australia, New Zealand and Switzerland. Canada moved from free to mostly free this year. Two years ago the United States fell out as well.

The nations in my analysis included 16 different developed countries representing 85% of the world’s investable markets and 98% of the developed countries. Freedom scores ranged from #1 in freedom Hong Kong at 89.9 to #92 ranked mostly unfree Italy at 58.8.

The spread of freedom scores among these countries was more than 30 points. And the trend line for the last year showed an average extra return of 0.36% per freedom point. The 3-year, 5-year and 10-year trend lines between freedom and investment return were similar or better. Over the past decade, countries with freedom have experienced annual investments returns 6% above the EAFE index and 10% above countries like Italy. 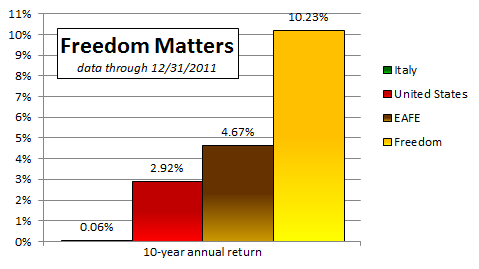 The sovereign debt problems of the United States and the European Union affect several of these freedom scores. Nevertheless, we think it is important to look at a country’s debt and deficit as well. Some countries actually follow Keynesian advice and have built up a reserve fund specifically for the lean years of recession. Others simply use his ideas as an excuse to spend even more in the lean year than their normal irresponsibility.

We believe this is one of the times when your asset allocation should tilt foreign and overweight the handful of countries with high economic freedom. Although many economists acknowledge that freedom matters, few investment strategies take advantage of this fact.