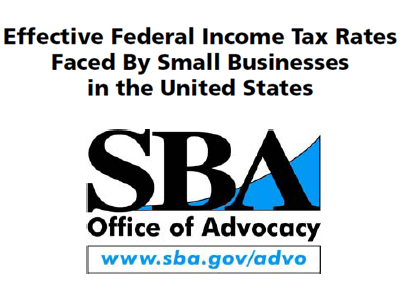 Some of of the data used in “Obama vs. Romney — Which Presidential Candidate Favors Small Businesses?” was taken from a report developed under a contract by  the Small Business Administration entitled, “Effective Federal Income Tax Rates Faced By Small Businesses in the United States.” This report makes a purposeful choice to mislead some of the data. In the opening Introduction it read in part:

The research detailed in this paper is limited to the effective tax rates imposed on small businesses by federal income taxes, due to the complexity of the analysis required for this study.

The bolded sentence is simply wrong.

As I’ve written previously, “All economic decisions are made at the margin.” When businesses hit the hot stove of a 100% tax rate for additional income they do not care if their effective or average rate has only been 10% up until that point. They recoil just the same.

Here are some of the facts from the report which were most interesting:

That last fact means that just over 12% of small business tax returns had gross receipts over $250,000.  These are the businesses that employ a proportionally higher number of employees. Their marginal tax return is the highest and tax changes to this group is what has the greatest effect on employment.

If there was one economic principle I wish advocates of bigger government and higher taxes understood it is:

All decisions are made at the margin.

I know the country is politically polarized, but please remember: Free Enterprise safeguards lasting happiness, promotes real fairness, and does the most good for the most vulnerable.