As a student of the tax code I clicked on a political ad recently by the Obama campaign asking me to get the facts about the tax savings under Obama versus under Romney. It took me to a quite impressive Barack Obama tax savings calculator where I could enter my family income, Filing Status and number of dependents and see what money each candidate might save me on my taxes. 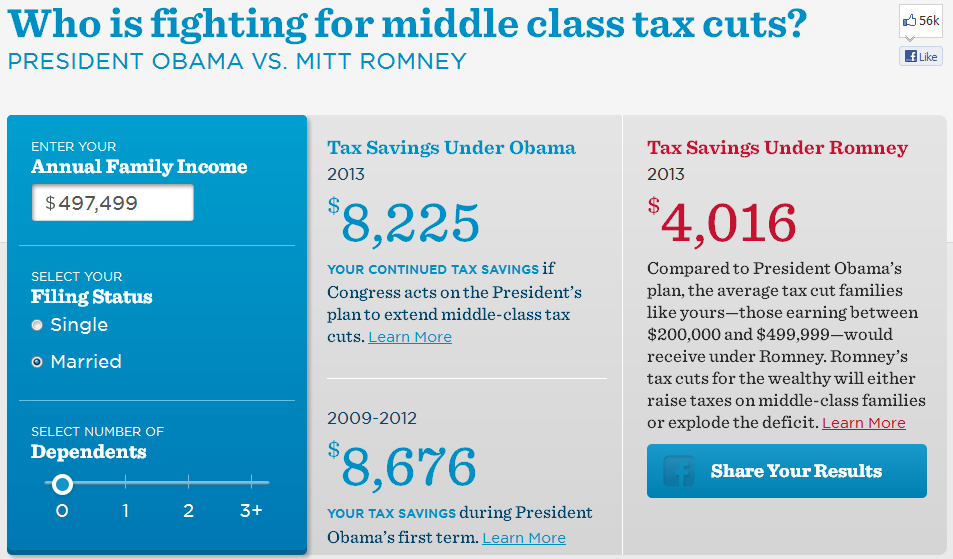 And now the calculator gets stuck again, this time permanently. Even if you earn $10 million you can’t seem to get any more Romney savings:

There’s a term in the financial world for Internet sites like these and that term is “fraud.” It is one of the things that even the most radical libertarians believe should be against the law. That a well funded presidential campaign would mislead this way, have it pointed out, and then not remove or correct it is Chicago politics at its worst. That the media doesn’t make these type of lies an issue is a tragic failure of what used to be called journalism.

Please don’t try to justify the site as being mostly true or true in spirit. The site isn’t even that. The “number of dependents” slide is completely for show and doesn’t seem to affect anything. The “continued tax savings” doesn’t make any sense under any proposal which has been even slightly suggested by Obama. The “learn more” feature offers no explanation that would support any of the claims. These are not “simplifying assumptions” they are simply lies.

I appreciate a good debate of policy when facts and reason are used. But I don’t know what to do with automated lies scripted and told with a straight face. I would have to agree with economist Thomas Sowell who wrote in an Investor’s Business Daily article earlier this year entitled, “President Obama Smooth Player In Political Lying Game“:

One of the highly developed talents of President Barack Obama is the ability to say things that are demonstrably false, and make them sound not only plausible but inspiring. …

Now there are different kinds of liars. If we must have lying presidents of the United States, I prefer that they be like Richard Nixon. You could just look at him and tell that he was lying.

But Obama is much smoother. On this and on many other issues, you would have to know what the facts are to know that he is lying. He is obviously counting on the fact that, in this era of dumbed-down education, many people have no clue as to what the facts are.

He is also counting on something else — namely, that the pro-Obama media will not expose his lies.

My first thoughts when using the Obama Lie-O-Matic Tax Calculator was, assuming all the numbers were correct, to imagine how many employees a small business owner with $1 million of income could hire if they were taxed $245,551 less. I think they could hire at least 4 or 5 more employees.