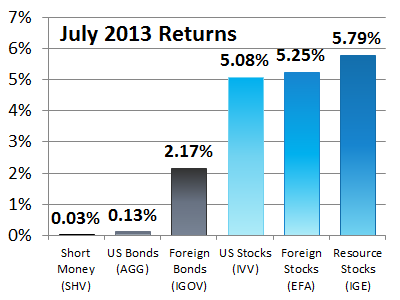 The exchange traded funds listed in the chart above are a representative of one of the major holdings in each asset category. Many other holdings tune the asset allocation within each asset class. And there is a wisdom of how to diversify each.

Asset allocation means always having something to complain about. Investors are continually looking for the safe investments with good returns. But inflation, sovereign debt, globalization and diminishing U.S. economic freedom make a clear choice difficult. We advise a diversified portfolio that overweights certain subcategories in each asset class.

If you have set such an asset allocation, what did poorly this past quarter may be poised to do better in the coming year. If your asset allocation is wrong, change it. But if it is right, don’t abandon a brilliant allocation simply because of short-term returns. Just rebalance back to your original targets. It takes a confident contrarian to ignore the daily market noise and the 24/7 financial news.

During 2013 second quarter bond values dropped as interest rates rose sharply. In July U.S. Bonds were back to their meager returns.

Foreign bonds, which had dropped precipitously last quarter as the dollar strengthened, gained in July as the dollar weakened again. Here is a chart of the U.S. Dollar Index for July 2013 (click for detail): 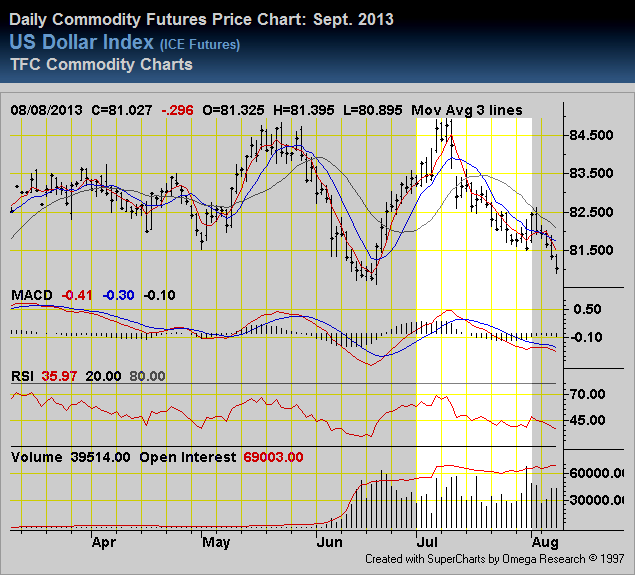 Foreign stocks, as represented by EFA, were up slightly more than U.S. stocks in July. This after not having done very well last quarter or year to date.

Resource stocks include companies that own and produce an underlying natural resource. These include oil, natural gas, precious and base metals, and resources like real estate, diamonds, coal, and lumber. Resource stocks, also called hard asset stocks, provide an inflation hedge. They do well when the dollar is dropping in value and poorly when the dollar is strengthening.

iShares North American Natural Resources ETF (IGE) was down 5.07% during the second quarter as the dollar strengthened, but back up 5.79% this month.