I’ve heard that the stock markets usually go up after Christmas. Is that really a trend?

How significant is this trend? Is it worth buying just before Christmas and then selling in January?

– Looking for a Santa Claus Rally

Investors are always on the lookout for some trend that can help their portfolio perform better. Every bit of market statistics is analyzed and back-tested to see if trends can be found.

On average, the S&P 500 Price Index (which does not include dividends) goes up by about 0.03% per trading day. Tthe markets are obviously not so well-behaved as to creep up a little bit each day and never go down. Instead, the average positive day is up 0.65% and the average negative day is down -0.67%.  Notice that the average down day is down slightly more than the average up day is up. Fortunately, the stock market statistically ends the day up 52.9% of the time and only down 46.4%. 0.7% of the time, the stock market closes exactly as it opened.

Most stock market movements are just noise and volatility. When the positive and negative are matched together, the up and down noise cancels out, leaving a small number of days to make up all real stock movement for the year.

Historically, the nine or so trading days between Christmas and January 8th are among the more positive days in the stock market.

Many narratives have been proposed for why there is a Christmas Rally effect. Here are some reasons which have been suggested:

All of these may be contributing factors to the Christmas Rally. But because of the way markets are made, stock prices move up whenever there are more buyers than sellers. Historically, the end of December experiences a number of deposits, the largest of which is probably end of year bonuses. Early January is also the time when many pension funds make additional deposits. Probably for these reasons, there is often a small measurable extra appreciation during this time.

The early portion of January experiences an average daily appreciation of 0.11%, about 3.2 times the normal 0.03% average. 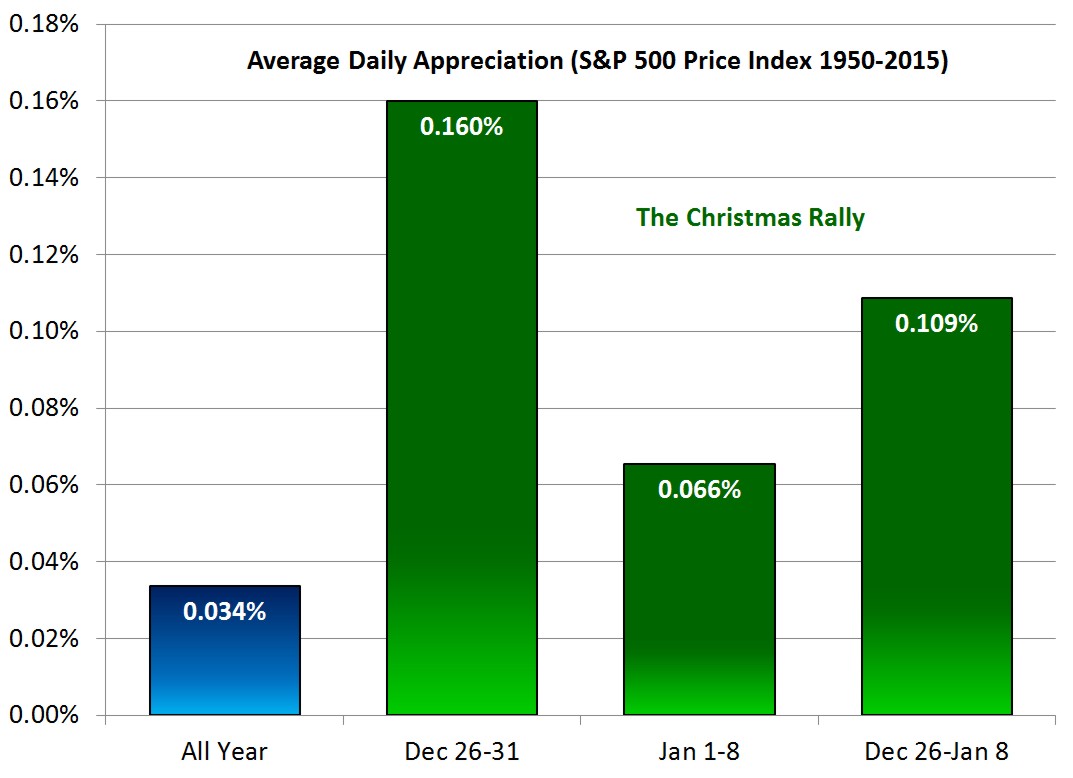 The total average appreciation for the nine trading days after Christmas through January 8th is about 0.99%. Getting an extra percentage is always appreciated, but this signifies nothing more than another time when being invested is on average better than not being invested.

While Santa Claus usually brings something positive for the markets, it isn’t enough to worry about jumping in and out of your investments.

The Christmas Rally is just another reason to stay invested and rebalance your portfolio regularly.