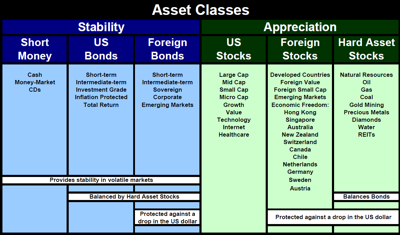 To boost returns and protect your investments, you can use the investment metric called correlation. It will rebalance your portfolio at three levels of investment allocation: stocks and bonds, asset classes and sectors of the economy. The dominant categories of stability and appreciation are the most basic way to view your portfolio. By continually trimming your stocks while the market appreciates, you can replenish the money that we hope you are setting aside regularly for safe spending.

Over a long enough time, an allocation to lower performing investments such as bonds generally results in a lower expected return. Thus asset allocation at this level helps control risk. It also provides enough allocation to stable investments to cover a period of safe withdrawal rates of five to seven years, so the appreciating assets have time to recover after a market correction.

Below the broadest categories of lower risk bonds and higher returning stocks are candidates for asset classes. Asset classes are used to set the percentage of your investments that you will put in each category. Each investment advisors may define their asset classes differently. But studies have shown that diversifying among categories with the lowest correlation produces the most return for the least risk. Therefore these categories represent the optimum candidates. As the correlation rises, assets are more apt to be classified as merely sectors or subsectors of the investment world, rather than asset classes.

The Natural Resources Index at 0.38 has one of the lowest correlations to the S&P 500. This index does not represent commodities but rather the companies that produce or provide them. For example, the index tracks oil and mining companies, not the price of oil or minerals.

Examples of these natural resources include oil, natural gas, precious metals (particularly gold and silver), and base metals such as copper and nickel. It also covers other resources like diamonds, coal, lumber and even water. Real estate is also included because land serves as the underlying hard asset. Having such a low correlation clearly shows these companies deserve their own asset class.

Many advisors don’t have an asset class for natural resource stocks. Instead they select one portion of the category, typically real estate, and make that the asset class. This can also be a good idea. Real estate indexes have correlations as low as 0.49 against the S&P 500. We use real estate as a subclass within the natural resources category because at times it has a low correlation with energy and other commodity movements.

At the end of April 2009, for example, the EAFE index hadn’t lost anything over the past 10 years. Compare that with the S&P 500’s negative 2.48% annual return resulting in a 22.2% loss for a decade’s worth of investing. At times little diversification may be realized by investing in foreign equities. But the benefits happen consistently enough for our firm to consider foreign stocks its own asset class.

Some people try to diversify internationally by investing in U.S. companies that gain a significant portion of their revenue from sales abroad. But studies have found that these multinational companies still track fairly closely with other domestic companies. And they don’t offer the same benefits as investing in foreign stocks.

We use country selection and emerging markets as our subclass allocation. At 0.50, the Emerging Markets Index correlation to the S&P 500 is even lower than the EAFE. It has also has had some of the best returns, recently averaging 8.24% and totaling 120.7% over the past 10 years.

And these stellar returns include having lost 42.90% over the last year! Sometimes you have to make a large profit to still have decent returns after a market correction.

Within the asset class of U.S. stocks are also several subclasses that provide opportunities for diversification. The Russell 2000 small-cap index, for example, has a correlation of 0.75 against the S&P 500.

Using correlation to define our top-level asset categories, therefore, we use three asset classes for stability (short money, U.S. bonds and foreign bonds) and three for appreciation (U.S. stocks, foreign stocks and natural resource stocks). Then within each asset class, we suballocate for additional diversification.

Most investors and even many advisors use investment categories entirely contained within U.S. stocks and bonds. A low correlation investment strategy, in contrast, would suggest broadening your horizons to obtain the lower volatility offered with a broader definition of asset classes.