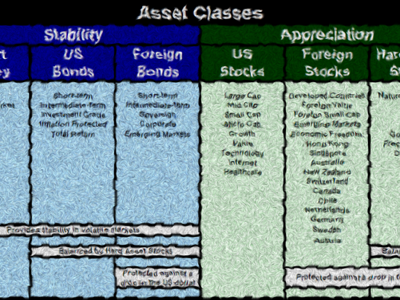 Rebalancing between asset classes boosts returns and decreases volatility. But setting your asset classes based on sectors of the economy is not an effective strategy.

You can rebalance your investment allocation at three levels: stocks and bonds, between asset classes and among subclasses. At the highest level, rebalancing between stocks and bonds reduces risk. Selling some of your stocks after the market has appreciated limits your portfolio’s volatility and locks in some of your gains.

Correlation between investment categories helps define asset classes and sort out which are merely subclasses. The lower the correlation, the greater the bonus you can gain by rebalancing regularly. Rebalancing between U.S. stocks, foreign stocks and natural resource stocks offers a significant bonus because these asset classes have the lowest correlation.

Smaller bonuses are available within each asset class for categories with a higher correlation. But the law of diminishing returns comes into play as the number of categories continues to double and the correlation between divided subcategories approaches 1 (one).

Some investors try to allocate and rebalance between sectors of the economy. For example, Dow Jones divides the economy into these 10 sectors: Financials, Consumer Services, Telecom, Industrials, Basic Materials, Consumer Goods, Utilities, Oil and Gas, Technology and Health Care.

I don’t recommend rebalancing at this level. You cannot know what percentage to allocate to each category. Putting 10% in each sector doesn’t make sense because the division is arbitrary. Dow Jones puts Oil and Gas together in one sector. If they had divided it into two sectors, it would not have justified twice the investments. Dow Jones divides the index one way, and the S&P 500 indexes another.

Additionally, some of these sectors represent a greater percentage of the economy. If you set your target percentages now, the economy will change and your targets will be out of date. Technology has grown significantly as a percentage of our economy. Investors who continually moved out of technology missed much of the best returns during the 1990s.

Ten sectors taken two at a time produces 47 different pairings, each with its own correlation and rebalancing bonus or penalty. I computed those statistics using annual returns from 1992 through 2008. Some pairings have a bonus, and some have a penalty. I don’t recommend rebalancing at the sector level, but an analysis of which sectors offer a bonus and which cost a penalty can suggest some investment strategies.

Some have a high correlation and have little or no bonus, such as Consumer Goods and Financials. Consumer Services, Telecom and Technology are also all highly correlated.

Categories with a higher average bonus for rebalancing include Financials, Telecom, Technology and Oil and Gas. These are all sectors that have expanded and then corrected sharply.

Rebalancing in this case is a poorer version of tilting toward value. A better bonus would be gained simply by emphasizing those stocks with a low price-to-earnings (P/E) ratio. When stocks in a sector bubble, they often experience high P/E ratios because they represent a greater percentage of the S&P 500.

The markets are smarter than the experts. It is by definition that they know what market cap a given industry deserves. It may bubble in its growth getting there, but you only know the bubble is over after it bubbles.

Four sectors offer a large rebalancing penalty with each other. They are Industrials, Basic Materials, Consumer Goods and Services.

Sectors of the economy wax and wane with the business cycle. As a result, when stocks in one sector of the economy are performing poorly, they may continue that way for some time. This form of rebalancing will result in lower returns than if you just let the market cycle adjust your portfolio.

Business cycles vary in length. As a result, annual rebalancing will incur a large penalty when you move out of a sector that did well last year into a sector that will do poorly next year. The penalty appears to be the worst for sectors that peak and valley at similar times during the business cycle, such as Industrials and Basic Materials or Consumer Goods and Services.

In this case, intelligent rebalancing, which takes the business cycle into account and rotates which sectors you are emphasizing, would at least try to capture the bonus and avoid the penalty. Knowing where you are on the business cycle, however, is just as demanding as predicting which industry will have the highest return.

Utilities are the least highly correlated to other sectors. They are a defensive sector and often do better than other sectors when the market is dropping. A sector rotation strategy suggests overemphasizing utilities and underemphasizing stocks when P/E ratios are high.

Sectors of the economy grow or dwindle based on global macroeconomic trends. Over time, companies responding to market conditions increase the capitalization of those goods and services that society demands and decrease those that are phasing out of the economy.

In the beginning we were an agrarian society. Then the industrial revolution began in America and Great Britain. Now we have more of a service-based economy. Perhaps genetics will bring about a health-care boom in the near future.

The lifetime of my grandparents spanned the Wright Brothers to landing on the moon. Your grandchildren may choose a college major that hasn’t even been invented yet.

Setting investment percentages also doesn’t allow you to make strategic investments in sectors that you expect to grow and outperform over the next three to five years.

Rebalancing at the capitalization level (large cap and small cap) makes sense because large- and small-cap companies will always exist. Small companies have a higher expected rate of return because it is easier to double the size of a small company than a large company.

Similarly, it makes sense to rebalance using investment style (value and growth) criteria because these are universal descriptions of stock types and not specific to industry. A company can move between value and growth based on its price. Overweighting value companies outperforms growth stocks because of the risk of a growth company faltering in its expansion and causing a serious price correction. Limiting your investment in such stocks slightly smooths and boosts your returns.

Although the markets as a whole often revert to profitability and growth, this isn’t true of individual stocks or industries. Most of the dot-com stocks that bubbled at the beginning of 2000 will never regain their former glory. Buggy whip manufacturers are no longer ubiquitous.

A better strategy is to look for three- to five-year trends in the economy and simply overweight those that have the best chance of continuing to grow in importance. Such trends last long enough for investors to take advantage, assuming they are looking forward to what may do well and not backward to what has been recently bubbling. Two such industries I would expect to do well going forward are health care and technology.

The most critical expertise that an investment manager can provide is a good investment philosophy. Investment analytics give you the best chance of matching your specific financial goals with the diversified investment mix that is optimum to meet those goals.