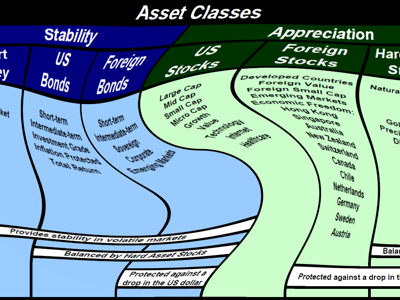 The investment metric correlation helps you continually take your gains off the table for safe spending. And it helps you determine what constitutes an asset class and which subcategories to consider for further diversification. Once these categories are defined, correlation can also reveal how much of a bonus to expect from your returns when you rebalance between two categories.

In his 1996 article “The Rebalancing Bonus,” William J. Bernstein presented a brilliant formula to approximate the extra return you can expect by rebalancing your portfolio regularly. We rarely focus on a formula in this column. But there is deep wisdom here, both for portfolio construction and for determining which categories are worth regular rebalancing. Here is the formula:

Where B is the bonus, P is the percentage allocation, sigma (σ) is the standard deviation (SD) and c is the correlation between the two assets.

The implications of the formula are useful, even for average investors. We can learn six valuable lessons from Bernstein’s model.

First, notice the approximate size of the rebalancing bonus. A 50-50 allocation between two investments with a 0.5 correlation where each investment has an SD of 20% might be typical for equity investments. Such a mix has a rebalancing bonus of 0.5%. We will use the formula to demonstrate ways to boost this bonus. Even a half percentage point is noteworthy.

Investment professionals divide an extra 1% into hundredths of a percent, called “basis points.” Earning an extra 50 basis points is huge. Investment advisors bend over backward for an extra 10. So rebalancing pays.

Investors are taught to minimize the number of investments and investment categories. Although there is a gradual law of diminishing returns, diversification provides investment gains any time the investment itself is worthwhile and the correlations are low. With computer support for the analysis and rebalancing, investors can handle a large number of categories and holdings.

Thus when an option is investment worthy, it merits a significant allocation. A good rule of thumb is to only skew an investment choice as much as two thirds to one third. Always invest at least a third into the smaller allocation.

The remaining lessons come from the terms inside the curly brackets of the formula. The allocation product is multiplied by the sum of these two terms. Maximizing their sum augments the bonus gained from rebalancing. Either of these two terms might be zero under certain circumstances. Each term has lessons to teach the savvy investor.

So lesson 4 teaches us that the lower the correlation between two investments, the greater the importance of rebalancing. Rebalancing at the asset class where correlation is the lowest is more consequential than rebalancing between suballocations with a higher correlation.

Emerging market investments are extremely volatile. When they appreciate, an excellent strategy is to trim the position and take some profits off the table. When it drops precipitously, it is equally critical to reallocate and invest some more. Volatility equals opportunity if you rebalance regularly.

The last term is the difference between the SDs. It was zero in our example because the SDs were both 20%. To consider the contribution to this term, take the case where one of our investments has a 20% SD. But the other investment is as secure as possible and has a SD of zero. The first term becomes zero, but the second term makes up the difference.

Thus the greater the difference between the SD of two investments, the greater the bonus from rebalancing. Moving money from bonds back into stocks after a market correction yields substantial gains. A recent study from Fidelity shows exactly that: “Millionaires who used past recessions as buying opportunities now boast an average of $1 million more in investable asset than millionaires who shifted into more conservative investments.”

Finally, we must learn to recognize when rebalancing provides a good chance of boosting returns and when it is unimportant. Rebalancing between two categories of U.S. stocks with a 0.85 correlation only gains a 0.15% bonus. In contrast, rebalancing between fixed income and emerging markets gains nearly 1.5%.

I asked formula creator William Bernstein how he might caution investors. He answered, “Rebalancing works best with high-volatility, low-correlation assets with similar long-term returns. Although this usually boosts the return of the equity part of the portfolio, if the returns are different enough, as occurred with Japanese equity over the past two decades, it can actually reduce return. This is not a free lunch.”

The markets are inherently volatile. Rebalancing works best for categories that qualify as asset classes or subclasses. Next week we explore which investment categories do not warrant rebalancing because you are more likely to reduce returns than boost them.

Rebalancing is always a contrarian move, selling what has done well and buying what has done poorly. Many investors don’t have the discipline to take that step when it is appropriate. But regularly rebalancing your portfolio offers expected returns about a percentage point better than buy and hold. Rebalance your portfolio regularly, and take advantage of this bonus.